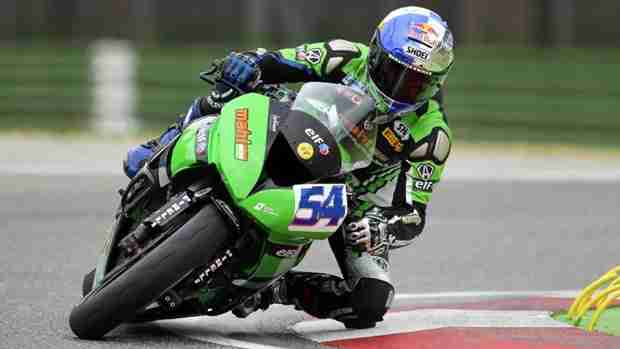 With both official Kawasaki riders chasing Sam Lowes’ championship lead motivation and confidence are high, particularly for Sofuoglu, who won the first race of the year in Australia and the most recent one in Imola. The Turkish rider is the most successful ever in the WSS class, having increased his all time race win total to 23 after Imola. He is going for his fourth world championship title this season.

Foret had a tough outing last time in Italy and therefore sees the Russian round as an ideal opportunity to make use of the good work he and his team did in testing at Imola, one day after the most recent WSS race. He now feels more at ease on a race set-up and is keen to get back into the top three in races, not just in the championship standings. Fabien has scored a win and two other podiums so far, and is third in the rankings, one place behind his team-mate Sofuoglu. Fabien has 16 career race wins in this class, making him the second most successful WSS rider in terms of outright race victories.

David Salom (Kawasaki Intermoto Ponyexpres) will not ride alongside his regular Luca Scassa (Kawasaki Intermoto Ponyexpres) in Russia due to his continuing hand injury issues and in Russia David will be replaced by the talented young French rider, Florian Marino. Kevin Coghlan (Kawasaki DMC-Lorenzini Team) will not be teamed up with Vladimir Ivanov (Kawasaki DMC-Lorenzini Team) this weekend as the Russian rider will have to miss his home race due to leg and pelvic injury suffered in Italy last time out. Vladimir will be replaced by the team’s Superstock 600 rider, Alexey Ivanov, for the Russian round of WSS. Privateer Andrea Antonelli (Goeleven Kawasaki) will be in Russia looking for more top six success.

“Imola proved to be a positive weekend for us after winning the race and we got our confidence back there. We had some bad luck in some races before that but we were very strong in that race. I like the track in Moscow and I won there on a Ninja ZX-6R last year and I think we should be strong challengers for the win in Moscow again this time. Hopefully we will have good luck and we will take another race win.”

“I want to make a good challenge at the front again, just like I did in some previous rounds this year. The weather should be OK and the aim is to finish on the podium at this round. I lost some points in Imola, which is normally one of my favourite tracks, so let us see what we can do in Moscow. We stayed behind after the Imola race weekend for a one-day test and we tried many things on the bike. I found the bike settings much more comfortable to ride with at the end of those tests so hopefully we can confirm those positive changes with a good race result in Moscow.”