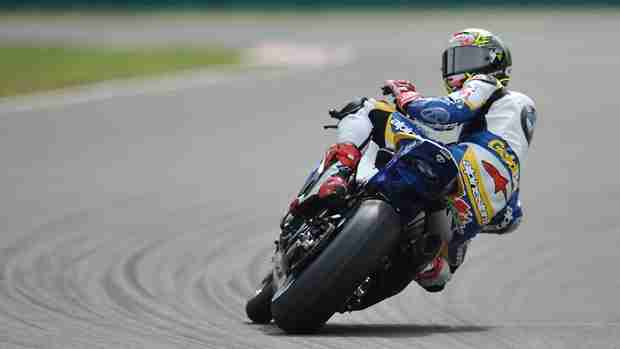 The BMW Motorrad GoldBet SBK Team is heading to the East of Europe where the second half of the 2013 FIM Superbike World Championship starts in Russia. The “Moscow Raceway” – located west of the Russian capital Moscow close to the city of Volokolamsk – will host the eighth round of the season this weekend (19th to 21st July). In the Manufacturers’ classification, BMW is currently third with 237 points. In the Riders’ classification, factory riders Marco Melandri (ITA) and Chaz Davies (GBR) are lying in fourth and fifth respectively. Marco has collected 182 points so far with his BMW S 1000 RR while Chaz has 154 points.

This round is the second visit by the Superbike World Championship to the new “Moscow Raceway” which was only opened one year ago in July 2012. Last year’s Russian debut was a more than successful weekend for BMW Motorrad. With one victory and a second place, Marco took the lead in the Riders’ championship. It was another milestone, as Marco was the first BMW rider to top this classification. In both races, the fastest lap was done with an RR: former factory rider Leon Haslam (GBR) secured this trophy in race one, Marco in race two. The Italian also achieved the highest speed in the races with 315.1 km/h. Chaz, since this season on duty as a BMW factory rider, has very fond memories of Russia, too, with the “Moscow Raceway” being the venue of his first ever podium finish in World Superbikes.

“During the Dorna test in Imola we tried some new setting solutions which worked quite well. On a different track of course we have to restart working on the set up but we will not start completely from the scratch.

The Superbike World Championship made its debut in Moscow last year. It was a very good debut and I also had lots of fun. The track is pretty flowing; you never brake or accelerate hard. You need to let the bike go as fast as possible into the corner. I don’t expect any gifts but I’m confident that we’ll have good races and that we could be among the protagonists.”

“I like the Moscow circuit. It is quite interesting and I think it is quite different to what people had expected. It is a small track and physically very demanding. In the first part, you get zero rest until the long straight before the last corner so you have got pretty physical work over most of the lap. The first part is also very technical, especially the section from the very long right-hander turn 3, when it comes back uphill and goes into a double apex left turn. There the line is pretty important as it is all connected.

I enjoyed racing there last year. It was a good weekend for me. In race one, I fast and catching the leader but then I had a gearbox problem, so I think I could have won. In the second race I finished third on the podium, though I have to say that I was a bit lucky as two competitors in front of me crashed. This year as usual it will be important to find a good set-up in the first practice on which to build on over the weekend. Overall I am looking forward to it and I hope that the little things that we found on Imola’s Monday test will help us in Russia.”