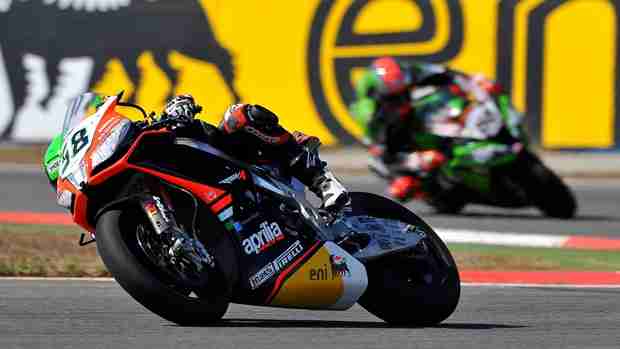 Eugene Laverty and Aprilia leave their mark on the first round of the World Superbike Turkish  championship with an extraordinary double. After conquering Race 1, the Irish rider repeated the script in the second round. The 50 points collected today bring him back to third place in the riders standings, 26 points off the leader. Sylvain Guintoli took the third step on the podium and fourth place in race 2. Sykes led both races today and battled hard to try and win each one. He was 3.432 seconds from the winner in race one and only 1.708 seconds from double race winner Eugene Laverty in race two.

“My last two goals went back to Monza, 2011, the two victories today have a special flavor because unexpected. I am very happy, in both races, our bike was set perfectly, especially towards the end of the race when the tires started to degrade and this has allowed me to win with the margin. Even my team was able to improve it after Race 1, then in the second despite a similar pace I rode more easily. I’m back in the running for the World Cup, but mostly I regained confidence and this gives me hope for the upcoming events. “

“Two races solid but still I missed something, I do not know if the speed or physical condition. Honestly I expected more from this weekend, after some good practice and the front row yesterday. It was not a disaster, we are still behind Sykes and I’m back on the podium, but the shoulder injury is not as simple to overcome. In a circuit like this, with fast corners and gusts of wind, gave me enough trouble. The next race will be at Laguna Seca, a track that I like where I hope to take another step forward. “

“Two podiums today even though it was the first time for me here. We had only two-and-a-half hours track time against two top riders who have previous experience of this circuit. We made two or three changes to the bike between races and I think everybody saw that our bike was working a bit better in the second one. We started that race quite strongly and I was able to lead again but some of our competitors were using the tyres a little bit better, so Eugene Laverty was able to catch me. Unfortunately I did not have the package at the end of the second race to fight back and try to win it. I believe that we can learn and improve from this weekend. I wanted to win in race one as well; I pushed hard but I feel if I pushed any harder I may have overstepped the mark. The changes we made this weekend should help for the future races. We are leaving with an improved points lead and that can only be a good thing.”