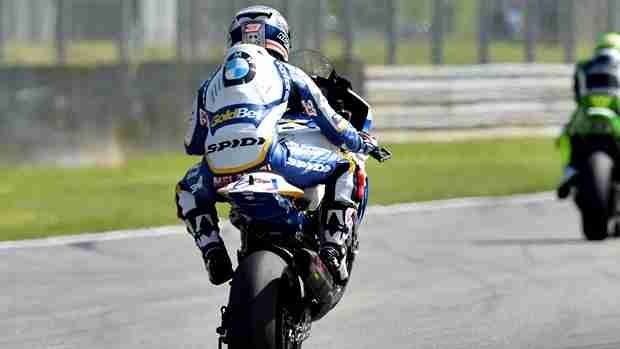 For the fifth round of the 2013 Superbike World Championship, the BMW Motorrad GoldBet SBK Team heads to a track which plays an important role in the history of BMW Motorrad. The British “Donington Park Circuit” is the venue not only of the first ever victory, but also the first ever one-two for the German manufacturer in the Superbike World Championship. Still today, everyone at BMW Motorrad remembers the moment when the BMW S 1000 RRs of factory rider Marco Melandri (ITA) and his then team-mate Leon Haslam (GBR) crossed the finish line in race one at last year’s Donington round.

Last year’s success was the first of nine victories in total so far for BMW Motorrad in this series. Three of them have been celebrated in the first four rounds of the 2013 season. New factory rider Chaz Davies (GBR) won both races at Spanish “Motorland AragÃ³n”, while Marco climbed the top step of the podium at his home round at Monza.

Despite some bad luck and issues, the BMW Motorrad GoldBet SBK Team has built on the successes BMW Motorrad achieved in 2012 and secured the manufacturer’s best ever start to a Superbike World Championship season. After four rounds, Marco and Chaz share six podium positions and two fastest race laps between them. Together, they have already collected 190 points for the team. After the first four rounds of the 2012 season, the factory team had 140.5 points and two third places on its tally.

In the Manufacturers’ classification, BMW is second with 144 points, 28 points behind the lead. These are 48 points more than after the first four rounds in 2012, when BMW was fourth on 96 points with a gap of 44.5 points to the front. In the current Riders’ classification, Marco is fourth with 96 points; Chaz sits in fifth with 94 points. Both riders like the Donington circuit. Marco has won there twice in as many years competing in the WSBK series, while for Chaz it is his first home round of the season. The race takes place on British soil, but is held under the European flag. Donington from the rider’s point of view:

“I really love Donington. Here I got my first Superbike win with Yamaha in 2011 and the first victory in the history of BMW in the series last year. This is a technical track, quite different from Monza. In Donington you never shift to sixth gear while in Monza you use it three times. The two chicanes in the last part of the Donington circuit seem to be there to keep the field close together. The race will be very open and hard-fought, and if it does not rain, it will be very exciting.

We head to Donington in a better position than last year, even if we did not have a perfect start to the season. In Monza I found the right feeling with the RR. Now I can ride it in the best way and be competitive. I’m looking forward to Donington and I feel really confident. Now I want to fight for the podium at every race and, when it’s possible, I want to win.”

“I am looking forward to my first home round. It is always good to meet up with friends and family and to feel the support of your home crowd. Donington was the first proper circuit I rode on, so I have special memories of it — especially the first part of the circuit is enjoyable. To go through ‘Craner Curves’ is quite a challenge. Overall, there are two completely different styles of track. You have the fast first part and then the hard braking second part so it is difficult to find a compromise with the set-up.

I hope that we will have a smooth and normal weekend. I will try to do a good qualifying and then we will see. Marco was very fast there last year, so the team should have some good data to start with.”