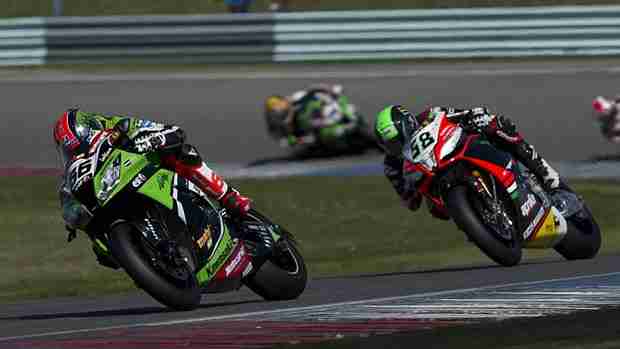 Englishman Tom Sykes came close to his first double race win in SBK with a first and a second place finish at Assen, making himself the single highest points scorer of the day with 45. He is now on a total of 83 points so far, the same as two riders above him, but Tom is ranked fourth in the official results. Superb preparation in the team garage and then a similar performance from Sykes when the flag dropped in race one saw Sykes lead every single one of race one’s 22-laps, the English rider pulling away, setting a new lap record of 1’35.893 on lap two. He was over eight seconds clear at the end for a popular win and Kawasaki’s first victory at Assen since 2006. In the second race today Sykes led for 18 of the 22 laps and despite a late charge to try and take a double win he lost out by only 0.089 seconds.

It ‘was a weekend of satisfaction for the Aprilia Racing Team at the legendary Assen track in the fourth round of the championship. After the test command Dutch Aprilia riders in the world rankings and the Italian brand consolidates its leadership in the World Marche. Eugene Laverty, who started for the seventh time in a row from the first row, triumphed in Race 2 after an exciting duel with Briton Tom Sykes taking the first victory at the Dutch circuit of Aprilia in World Superbike. The victory, combined with the fourth place in Race 1, allows the rider Irish clinch second place in the standings behind team-mate Sylvain Guintoli.

After a Race 1 that saw him stop at a step away from the podium, Eugene Laverty took to the track in the second race extremely focused and well motivated not to let away Tom Sykes, in a solitary lead. The gap between the two has always been a few tenths and with 4 laps to go Laverty has made the decisive attack with the final assault on Sykes in the last few corners.

“Almost the perfect race weekend for us after winning Superpole as well. We have made progress after a slow start to the season so we will build more momentum now to move it all forward again. The bike was working well and was very consistent today. When Eugene came past me in race two I realised it was much easier to follow than to lead round here and it was just unfortunate that exiting the final chicane on the last lap I hit the kerb on the inside when I was trying to pass him, and I was out of the seat. It would have been great to win race two as well but I am happy with the day and we had and the great support at Assen from all the Kawasaki fans and some Tom Sykes fans. Race one was great for us and we did all we could. We have had a very strong winter test programme, learned a lot and have a lot of information and data. Now we are finding where we need to be. Overall I am happy because we did a lot of hard work in free practice yesterday. To be honest I surprised myself a little but the Ninja ZX-10R is working great. We have some great people who fight in my corner and they have given me a strong package so that I can do quite a lot of what I want to do with the bike. That first race was nice and believe me, to see that pit board gap get bigger every lap is magical for a rider.”

“The little time on a dry track has created some problems in Race 1, in fact before the second we intervened on the RSV4, something that usually does not do it for the risks involved. In fact, the changes have worked really well, I had the right feeling, even though I did not think I could stay with Sykes.Instead I kept his pace, indeed its wake helped me considering the strong gusts of wind along the track.With four laps to go I passed Tom, gaining even a few feet, but then the wind prevented me to be accurate then he has returned below. Winning today was important, we put back in the race in the championship and we have forgotten the most of the misfortunes of Aragon “.