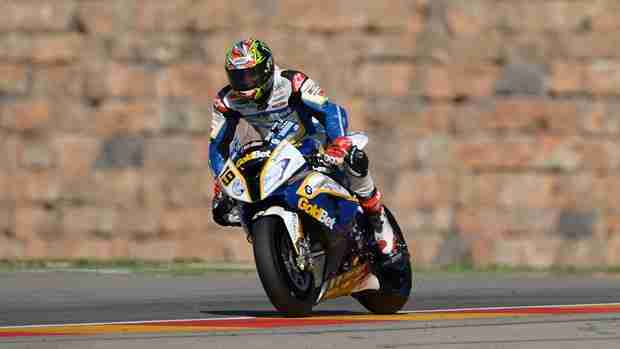 It was a dream day for the BMW Motorrad GoldBet SBK Team at the Spanish track of Motorland AragÃ³n. Factory rider, Chaz Davies (GBR) was the man to beat at the second round of the 2013 FIM Superbike World Championship after the Welshman won both races on his BMW S1000RR. He made the best use of his front row start and celebrated his first ever double-victory in the series. His team mate Marco Melandri (ITA), who started from eighth, jumped on the podium in third place in race one. In the second race, Marco finished fifth. In the Riders’ championship, Chaz has now climbed into second place with 63 points, while Marco sits in fourth with 43 points. In the Manufacturers’ classification, BMW lies in second with 79 points.

In both races, Chaz was on for the victory from the word go. In race one, the Welshman took the lead on lap five, while his immediate rivals, Eugene Laverty (IRL) and Tom Sykes (GBR), ran into difficulties. Once at the front, Chaz grabbed the chance to secure his first season victory with both hands and lap by lap he increased his lead which brought the win home safely. Marco improved from eighth to sixth within the opening lap, but went wide when fighting for positions and consequently fell back to ninth place. The Italian once more showed a great determination and caught up: on lap five, he was already third, taking second place on lap 13 by overtaking Sylvain Guintoli (FRA). Unfortunately on lap 16 he went wide again and dropped a number of positions, only to fight his way back onto the podium crossing the line in third place. The second race was shortened to 19 laps after the start was delayed. This time, Chaz took the lead on the second lap and began building the gap in front of his pursuers. He kept a cool head and rode a determined race to secure his second victory of the day. Not only this, but he also rode the fastest lap of the race. In the opening stages it seemed that both riders of the BMW Motorrad GoldBet SBK Team would be on the podium as Marco had a brilliant start and took third place on lap two. But he then experienced some issues and was not able to hold the position. Consequently, Marco slipped back into fifth which was the position he held until the chequered flag.

“For me it is just an amazing day. I cannot explain how happy I am. What a weekend! My first victory with BMW and then the double win – this is something I was hoping to achieve this year but I did not expect it to happen this early. I want to thank BMW and everybody who supported me. I  knew coming here that we are going to be strong. BMW has done a fantastic job over the last month we had off since Australia, and everybody was working very hard. In addition, I now really feel that the RR is mine, I feel so comfortable on it.

In race one, the DNFs by Tom and Eugene definitely made it easier. In race two it seemed that I had a comfortable lead, but to be honest I had to push a lot. One of the most impressing things is the fact that we have done a lot of testing in Jerez but not here in AragÃ³n, where nearly everybody else has been. So to win with that up against us, is quite impressive and it is credit to the work BMW has done. We will now keep being focused, continue to work hard and look forward to Assen, another race track I really like.” 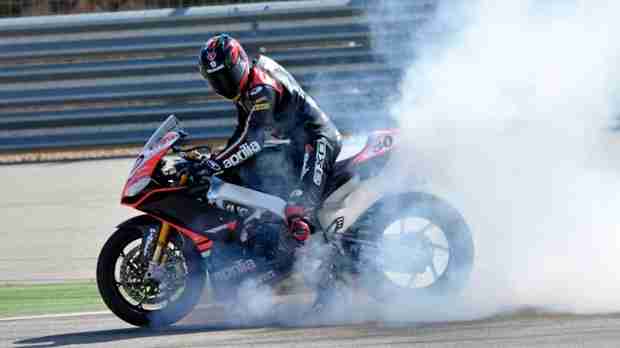 “In the first race I was a bit worried because I was really struggling, as I had been throughout the weekend. Aragon is perhaps my most dreaded track, so two second places are a really great result. I must thank the Aprilia Team, the engineers and my crew chief, Aligi Deganello, because thanks to them I was able to ride very well in Race 2. The changes we kept making to the RSV4 worked as they should have even if Chaz was really impossible to beat. I’m going to Assen with a lot of confidence. The results today are a perfect way to announce the arrival of my fourth child!”

“For me, it wasn’t the best weekend. After race one I was still pretty happy. At the start I wasn’t very comfortable with the front end and I made a big mistake trying to catch the guys in front of me at the end of the main straight. After that I got into a good rhythm and improved into second place. I thought that would be my position in the end but unfortunately the bike went into neutral between third and second gear. But I finished in third place which was not so bad for me. In race two, based on my experience with the 16.5 inch tyre, I chose a harder tyre for the front. But with the 17 inch tyre, it worked differently to how I expected. I had less grip and could not ride properly. In the beginning I pushed very hard, but then I preferred not to risk too much. I had no pain in my shoulder, but by the end of the race I had no strength left in my arms. I am looking forward to the next race in Assen, when we will be in a better shape. Congratulations to Chaz. He rode awesome — well done!” 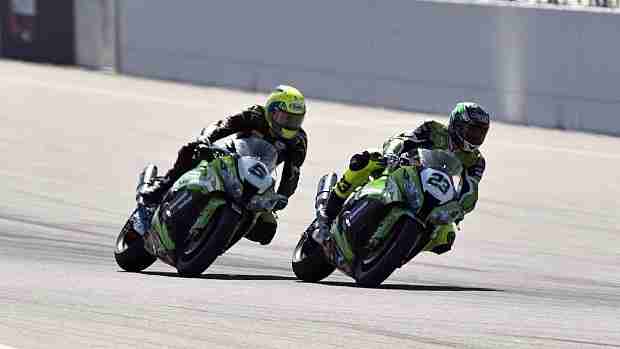 “Scoring a podium in race two was not a perfect way to end race weekend but it was certainly an acceptable way. It would have been good to finish race one as well just so that I could have collected a bit more information to take into race two, but I am not making excuses – the riders ahead of me in race two rode fantastically well. We are now moving onto circuits where we are a little bit stronger than here. I am also riding uninjured now and Kawasaki has been working really hard so let’s see what Assen can bring next time out.”