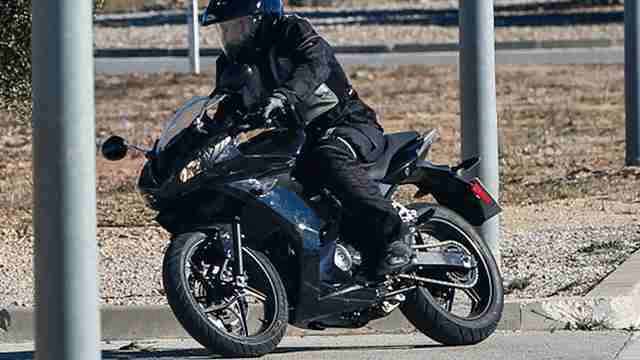 Triumph officially confirmed that they are working on a 250cc mini Daytona at the EICMA and showed us a photograph to go along, they reconfirmed this again at the India launch and added that it will only be a 2015 model indicating that the model is still in more of a functional prototype stage. But come last week thanks to our friends at Motorrad in Germany we now have photographs of what seems to the long term test mule.

The sad news though is that a photograph only tell’s so much. From the photos we now know for sure that the engine is a single cylinder and of-course a visual confirmation of what the bike would look like. The design seems somewhat similar to the Daytona but barely. Since its a single with seating ergonomics that looks pretty upright, its safe to assume the that bike is intended to be a daily use / mass selling bike rather than a focused sport bike. A single also means that the cost is going to be quite competitive in comparison to the likes of the CBR250/300, Ninja 300 and even the upcoming Yamaha R25 and couple that with the fact these bikes will be made in India, Triumph has the opportunity to take a huge chunk of the 250c market with them. Lets hope more details of this Triumph 250 comes up soon. Watch this space for more.