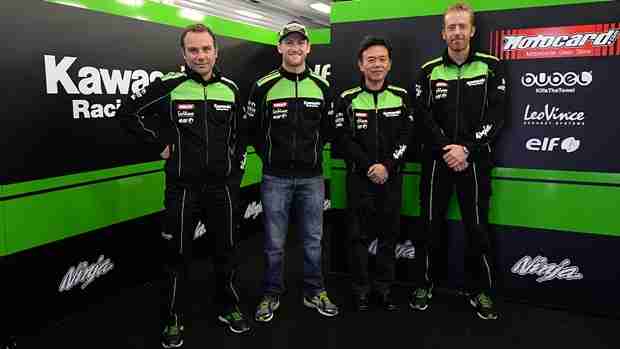 Sykes was runner-up in the championship in 2012 with KRT and currently leads the FIM Superbike World Championship after seven rounds of the season have been completed. Kawasaki is keen to continue this great form and build on it for the future so retaining Sykes was an important part in the winning equation of rider, machine and team. In 2014 Tom will start his fifth straight year with Kawasaki in the Superbike World Championship.

With new initiatives coming into place from SBK rights holders Dorna the 2014 SBK Championship is sure to be followed with keen interest by fans and media alike, making the choice of riders a key element of Kawasaki’s strategy. Re-signing Tom is also a recognition of the strong part he has played in the development of the on-track capabilities of the Ninja ZX-10R and his continued presence on the official team maintains his contribution to a very positive era in the history of Kawasaki’s overall racing activities.

“For me this is an awesome place to be. I have made my feelings quite clear to Kawasaki and all the individual team members and sponsors. I am really happy in my working environment and very relaxed. I am probably at my best in this kind of scenario so the natural thing is to continue for at least another year in SBK. It is a great championship and when you have all the ingredients in place to be fighting at the front every weekend, even at different circuits, it is what you aim for. We have proved that we can do it and had a couple of double wins already. I have a great feeling riding with Kawasaki, so why change that? I am over the moon to stay in the team and the continuity is great. I could not be happier with the people around me. The deal has been done so early in the season, which is an absolute first.”

“I feel Tom looks like he is going to be ‘Mr Kawasaki’, because after we had great success with American rider Scott Russell we found it difficult to find a new ‘Mr Kawasaki.’ Now it looks like Tom can be this person. We also want to push him to grow up in racing terms even more than he has already and he now realises himself how he can do this job. After his Imola double race win we feel he has understood his real potential and now it looks like he can develop even more quickly. The bike, the rider and the team have all made great progress together and because of this we are very happy.”

“Tom made incredible job last year and this year is still growing up as a racer. We are really curious to see what level he can final arrive at – that’s the main sporting reason we wanted to sign him from our side of things. From a personal point of view we have always found Tom to be a very good team worker, he always has a smile on his face for the Kawasaki supporters and he is a very cooperative rider with the media. He is a good guy who always tries to give his best and really concentrates on his job. I hope this early movement from Kawasaki in re-signing him will give him a calm environment to concentrate on his 2013 season and then work at 105% for 2014 – a season that we expect to be very exciting too. I want to say thanks to Kawasaki for giving us the opportunity to keep Tom in the team for next year.”

“It’s great news that Tom is confirmed to remain with us in the Kawasaki Racing Team for another season! He’s grown into a pure professional and clearly he is the man to challenge for the SBK title with our team and Ninja ZX-10R machine. Both are always developing and improving in every area, every week, in order to reach the common goal, which is to win the FIM Superbike World Championship for Kawasaki. It’s a perfect combination so there was no reason to change it from either side, I believe. This early announcement reassures Tom that his immediate future is clear and so I’m sure it will help him relax and focus on our goals right now and within the rest of the season.”