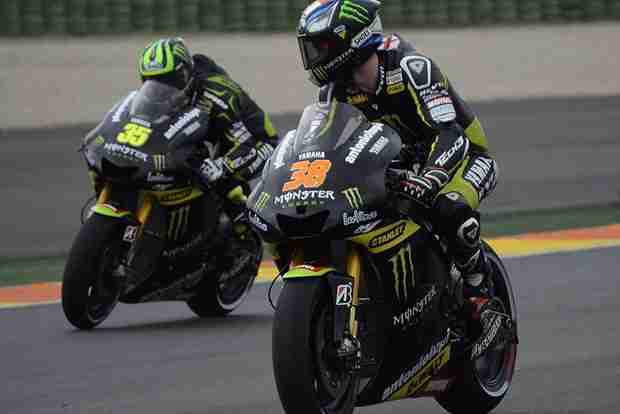 British duo Cal Crutchlow and Bradley Smith set the fifth and eighth fastest times at the Sepang International Circuit today to conclude a successful start to the MotoGP winter testing schedule for the Monster Yamaha Tech 3 Team. A best time of 2.00.734 ensured Crutchlow finished inside the top six on each day and after improving his pace by over a second throughout the test he finished in fifth position on the final time sheets. Having made improvements with corner entry rear grip yesterday, Crutchlow turned his focus to working on his pace an d consistency on worn tyres today, and he was satisfied with the progress to finish 0.634s away from Dani Pedrosa’s best time.

Rookie teammate Smith produced another fantastic performance and included in his 48-lap stint was an impressively fast and consistent full race simulation, which he completed in searing heat and humidity on the hottest day of the test. The 22-year-old has made a seamless transition from Moto2 to the heavier and more powerful YZR-M1 machine and his race simulation gave him priceless information on where he can improve when the Monster Yamaha Tech 3 Team returns to Sepang for a further three-day test later this month. Smith ended with a best time of 2.02.093 today, which was within two seconds of the quickest pace set by Pedrosa and he was only a second away from the top six. His fastest time at the test was yesterday’s 2.01.931 that secured him the eighth quickest time overall.

“It has been a very positive week and I am where I expected to be and that’s right behind the top four factory bikes. I can’t really ask for more than that and I’m pleased with my lap times because my bike is almost identical to the bike I rode last year. Today I was doing a lot of laps on old tyres and trying to stay consistent and I’ve improved. I also feel like I’ve made good progress in improving on the brakes, so it has been a productive test and good to be back on track after the winter break. I’ve built up my confidence each day but it is obvious that 2013 is going to be incredibly tough. There is some amazing talent on really good machinery but I am really looking forward to it. I’ll be ready to give it 100% as always and come the first race in Qatar I’ll be ready to challenge. Credit to Bradley as we ll because he has done a fantastic job this week. This was his first proper test in MotoGP and he has got faster and more confident each day. I have been very impressed with him and it is going to be good being his teammate this season.”

“I am really happy with the way this test has gone and my lap times and final position have already given me a lot of confidence. I didn’t come here with any expectations but to be eighth is where this bike needs to be. I am still not getting all of the potential out of the YZR-M1 but I am gaining in confidence with every lap I complete and it has been mission accomplished in terms of coming here and understanding how the bike needs to be ridden. I still need to be a lot smoother but I am happy to be within two seconds of the fastest time. I knew that was possible but the hard work starts now to close that gap even more. The race simulation was amazing to build up my experience but it was seriously hard work. It was the hottest day and it is very physically and mentally demanding to ride a MotoGP bike at that pace over a long distance. It is hard to concentrate but the best thing was on the last lap I did a 2.02.9 and my best lap was a 2.02.5. So I was consistent and while I need to be faster, I’m really happy to be leaving this test having learned so much. I need a good sleep now to digest all the information I’ve taken on but already I can’t wait to be back on the bike here later this month.”