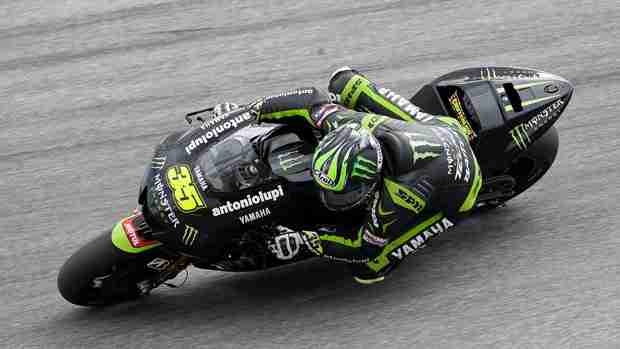 Cal Crutchlow and Bradley Smith ended a successful three-day test at the Sepang International Circuit on a high note after the British pairing both finished inside the top 10 on the final time sheets. Heavy rain that fell this morning gave the Monster Yamaha Tech 3 Team duo the chance to complete a handful of laps on Bridgestone’s rain tyres, with Crutchlow completing nine and Smith seven laps before the track started to dry out in extreme heat. The morning rain had a clear impact on grip levels for the remainder of the final day, with both Crutchlow and Smith unable to better their pace from the second day’s action in Malaysia.

Crutchlow completed a total of 59 laps today to set a best time of 2.01.094, which put him in sixth position and less than 0.1s away from the top three as he worked on improving corner entry performance on his YZR-M1 machine. A best time of 2.00.907 set yesterday meant Crutchlow finished fourth fastest on the overall leader board. Smith completed an exhaustive testing schedule today, the 22-year-old building up his knowledge by using a range of different settings on his YZR-M1 machine to set a personal best time of 2.02.070. That time placed him 10th on today’s time sheets and he managed to reduce the gap to the leading group to just over 1.7s. Smith was 10th overall at the conclusion of the second Sepang test courtesy of a best lap of 2.02.023 set on the only full dry day of the test yesterday.

“I am leaving this test in a positive frame of mind because I am fourth overall and although I was only sixth quickest today I actually think I could have been fastest. When everybody was pushing hard for a fast lap time at the end of the day I got held up on every lap but I am not worried about that. We have worked very hard this week to improve our package and today we gained more valuable information. I still lose a bit in the braking area and rolling into the corner. We tried to improve that but made the braking worse. But when we make the braking better we have no grip. So it is finding a compromise. We tried two different settings on the different bikes and one was better for braking and the other one was better for grip, so we need to find the best of both and put them together. I am not that far off the top three and they are all on factory machinery, so that is encouraging. To be fourth overall is very positive and I definitely think we are in the mix. My target was to be close to the factory guys and we are not too far away.”

“I leave this second test in Sepang positive because I know a lot more about the bike when I first got here. I sat in the garage when everybody was in time attack mode at the end and pushing for a fast lap on a new tyre. It is not that I didn’t want to go for the lap time but we are just trying to go step-by-step at the moment and look at the bigger picture. I still don’t believe that we have a base setting for me to ride but at least we have a direction of which way I prefer. Luckily for us it is towards the way Andrea Dovizioso went last year and that’s positive because we have got a whole load of data and experience from working wit h him. This is only day two of really modifying the set-up of the bike, so in terms of development we still have a lot to do. I would say we are in a lot better position now than I was at the last test although we haven’t gone faster. Now I am looking forward to working on the YZR-M1 at a different track when we go to Jerez for the final test.”