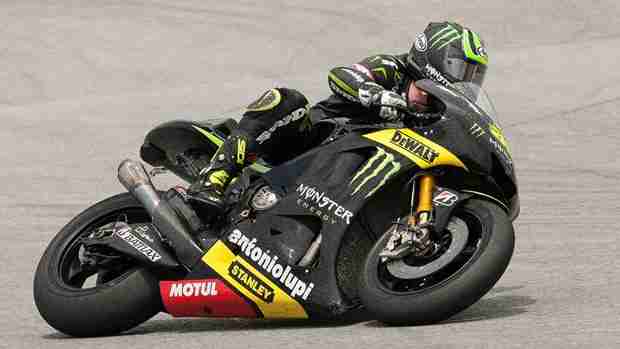 Monster Yamaha Tech 3 Team rider Cal Crutchlow stormed to a brilliant third place on a hot and humid second day of MotoGP testing at the Sepang International Circuit in Malaysia today. With track conditions a vast improvement on the slippery surface that greeted the field yesterday, lap times tumbled and Crutchlow was able to set a fastest pace of 2.00.907 on a day when air temperatures peaked at well over 30 degrees. Crutchlow shaved a ma ssive 1.3s off his best pace on a rain-hit first day and his big improvement enabled him to rocket up the rankings from sixth to third behind reigning World Champion Jorge Lorenzo and Dani Pedrosa.

The British rider dedicated much of his time on track today to working on different front fork settings and he experimented with a similar set-up used by Lorenzo in an attempt to make his YZR-M1 machine more agile in the fast changes of direction. The 27-year-old was satisfied with the progress made in his 59-lap stint having finished less than 0.3s behind Pedrosa. Rookie teammate Bradley Smith was also delighted with his performance today after he quickly restored his confidence following a tumble yesterday at Turn 7. The 22-year-old concentra ted mainly on improving his braking technique today on his way to clocking a best time of 2.02.369, which was an impressive 1.6s faster than his best pace on the opening day. Smith was able to get 63 valuable laps under his belt on a day in which he also began to evaluate a range of different settings on the Monster Yamaha Tech 3 YZR-M1 machine for the first time. His best time put him 10th and encouragingly for the future he was only marginally over one second away from the top six.

‘There didn’t seem to be a lot of grip out there again today although the lap times have improved a lot. We tried something different with the front fork setting, which was in a similar direction to what Jorge (Lorenzo) uses and there were some good and bad points like with most things you test. I’m happy with my pace because we’ve tried a couple of different settings and we need to work on fine-tuning the best one. The main goal has been trying to stop the front of the bike lifting so much when I change direction on the throttle. The bike feels quite heavy so we need to reduce how much the fork comes up without sacrificing too much in another area like the braking. I’m sure if I had put in some new tyres at the start of the day I could have gone faster. But I waited to use mine around lunch and I still went faster, even though the track temperature was much higher at that point. I’m not really too concerned about the times though. I’m just concentrating on making the package we have got better for the first race in Qatar.”

“After the crash yesterday I am feeling much happier today, though I’m a little bit wary of some things that happen with the front and that can play on your mind a little bit. But the track has more grip and my feeling with the bike is much better. Today I worked a lot on my braking technique because I’m being too cautious at the moment and not using the carbon brakes as they need to be used. We played around with some different settings today too just to gain more of an understanding about what direction we can take in the future if we have certain problems. I think Jorge is doing exceptionally well riding around consistently in the 2.00 bracket because all of the other guys seem to be in the 2.01s. He is on another level at the moment but to be honest I feel quite good doing consistent 2.02s. We are working for Qatar and the first race rather than lap times now. It is not e asy that’s for sure but I am confident soon it will start clicking into place and we will start rolling forward.”