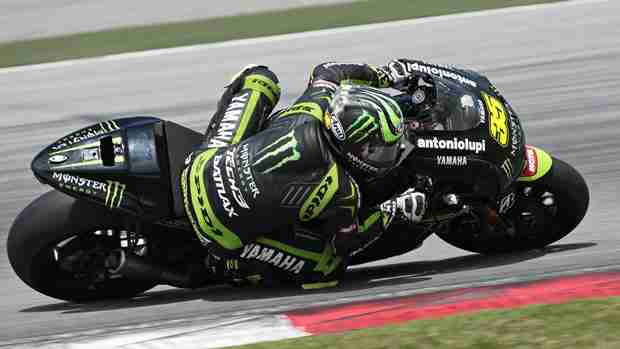 Cal Crutchlow and Bradley Smith enjoyed a positive start to the second MotoGP test session at the Sepang International Circuit today, the Monster Yamaha Tech 3 Team riders both finished inside the top 10 on a rain-hit first day. Crutchlow was fast straight out of the box this morning and a time of 2.02.272 set on only his fifth lap put him in second position. But a slippery surface and track temperatures that soared to over 60 degrees in searing heat meant lap times were considerably slower than those posted at the first Sepang test earlier this month. Former World Supersport Champion Crutchlow couldn’t better his pace of 2.02.272 in a further 23 laps on track, but that personal best was only just over 0.3s away from the top three and left him sixth on the time sheets.

Smith quickly established himself inside the top 10 as the British rider continues to build up his experience on board the YZR-M1 machine. He was lying in 10th position and he had just set a personal best time of 2.03.632 when he crashed on his 25th lap. Smith walked away unhurt from the spill which came after he lost the front-end of his YZR-M1 machine in the third gear Turn 7. Smith was preparing to return to the track this afternoon but torrential rain started falling with just over three hours of track time still available. Heavy cloud cover meant the Sepang International Circuit was slow to dry and further heavy rain later in the day meant both Crutchlow and Smith opted to take no further par t in proceedings.

“I’m happy enough with today because all you could do was ride around to the grip that was available. This morning the track condition wasn’t good at all. It was greasy and the heat was just making it worse and you can see the lap times are a fair way off what we were doing here only recently. I was 1.5s off my best time from the first test and Pedrosa was abo ut the same. Once I got to my best lap time today I pretty much stayed at that pace for the rest of the day because the grip wasn’t there. There were a few crashes and it was obvious that we’d got used to the grip that we had at the last test but it wasn’t there and when people started to push they crashed.”

“This morning was another good learning process for me because the track condition was completely different to the first test. It was dirty and slippery and it meant that I had to ride smoothly, which is how I need to be riding this bike all of the time. I’ve been a little too aggressive but in those conditions I had to ride the bike in a completely different way. The crash was another part of the learning process too. I’d had a couple of warnings in the previous two laps but I kind of shrugged them off because I’m not sure what the limit is. Now I know the limit although a crash is never ideal. I’d done all my laps on the same set of tyres and now I know what the warning signs are I’ll be better prepared in the future.”