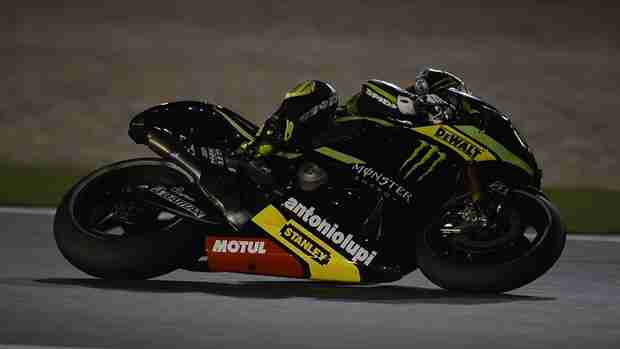 The 2013 MotoGP World Championship roared into action tonight, with Monster Yamaha Tech 3 Team rider Cal Crutchlow one of the leading lights in the season’s opening practice session at the floodlit Losail International Circuit in Qatar. The British rider was immediately battling for the top three in a session run in warm but windy conditions, which meant grip levels were far from ideal with sand and dust being blown onto the 5. 38km track surface from the surrounding desert landscape. An indication of how tricky track conditions were was reflected on the timesheets, with Crutchlow’s best pace of 1.56.743 some way off the fastest race lap set by Casey Stoner in 2012 of 1.55.541.

Full of confidence after setting the quickest time during last month’s final pre-season test session at the Jerez track in Spain, Crutchlow continued his impressively fast form tonight to help Yamaha take a clean sweep of the top three in the 45-minute session. A 1.57.795 put Crutchlow inside the top three and he was able to improve his pace by over a second to keep nine-times World Champion Val entino Rossi at bay and secure a stunning second position behind current title holder Jorge Lorenzo. Tonight’s session saw Bradley Smith make his competitive debut for the Monster Yamaha Tech 3 Team, the British rider making solid progress throughout the session and finished just outside of the top 10 on an encouraging opening night. The British rider dedicated the majority of his time on track to learning lines and braking markers on the YZR-M1 machine, which has never ridden at the Losail International Circuit. Smith completed 18 laps and gaining confidence throughout he ended the session with a best pace of 1.58.369 that put him on the brink of the top 10 in 11th and ahead of Andrea Iannone and Ben Spies.

Crutchlow and Smith will continue their preparations for the unique night race tomorrow evening when two further practice sessions are held under the spectacular Losail International Circuit floodlights.

“It was a very good first session on a personal level with me finishing second and also for Yamaha with a clean sweep of the top three. As is always the case on the first night in Qatar the track was quite dirty, particularly off the racing line. Even on the racing line it was quite slippery but I am happy to be right in the mix from the start. We need to make some changes to the bike for tomorrow because I felt we had too much weight transfer on braking and acceleration but I’ve got to be happy to finish in second and ending up in between Jorge and Valentino. Second place is great but I am not reading too much into it. As the track conditions improve some of the rest will get faster and it is still going to be very tough to be on the podium. I am looking forward to the race and being so competitive from the sta rt certainly gives my confidence another lift and helps me carry on the momentum gained in testing.”

“I’m really happy with my performance in my very first practice session in MotoGP. It’s nice just to get rid of the initial nerves and tension that has been building up as you get ready for the beginning of the season. With such little time on track in 45 minutes we didn’t tweak the bike too much. I just wanted to get familiar with the track because the lines and braking points are completely different to what I am used to in Moto2. Being on track with the rest of the field at the same time helps because I can pick up some pointers and I’ll watch a video of the session again to understand where I can improve and be faster for FP2 and FP3, where it will be important to finish in the top 10 for the new qualifying format. I’m satisfied with my posit ion though and I am not a million miles behind Nicky and 1.6s off the best pace is the closest I have been since I first rode this bike, so that shows I am moving in the right direction.”