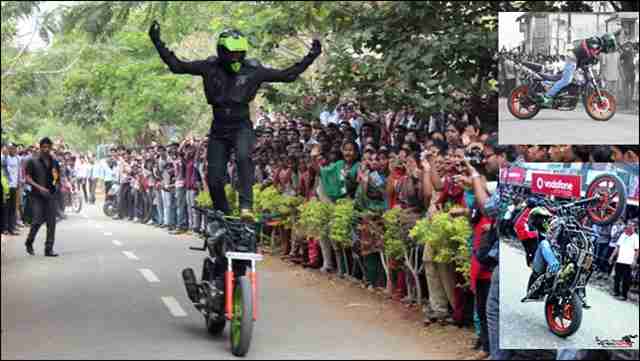 Motorcycle stunt teams are now an accepted breed in India and a lot of young men and women are boldly challenging the limits. With stunt riding making a strong case for itself over the past few years the number of stunt teams are on the rise and it is definitely a task to choose who is best. One team that is making all the right noises from down south are the guys that call themselves Team RPM. They have been chosen as the featured stunt team for December 2013. A quick word with them.

4. How did it all begin? How did you guys come together?

Its the usual story actually, we were a group of friends who were passionate about stunting and practiced during our free time. As soon as we realized that we were getting good at it we went public with a team and that’s how Team RPM formed one year back.

5. Your favorite stunt as a team and what is in store for us in the pipeline?

No hand circles wheelie, we are currently trying to get more rhythm into our stunts and make it more fluidic.

7. What was your biggest challenge so far as a stunt team?

Support to get going was always tough, convincing the elders was one tough ask. Our pledge for safety finally convinced them.

8. Biggest achievement as a stunt team?

The biggest achievement is our fans, supporters, followers and our sponsor. We have did a stunt show at Kerala’s Biggest Auto Show in Thrissur in 2012 which was a great achievement.

Everyday there is something happening, small falls and failed stunts that happen during practice, there is always a funny incident around the corner.

It may sound cliched but our future plan is to be the Best Stunt Riding Team in India and go about it step by step. We are trying hard for that and our biggest dream is to perform outside India.

11. What would you like to say to your supporters/fans/followers?

We were having some technical problems and stopped our shows for the past few months, but we are back now and better that before. So please do continue your support and watch out for some crazy action in the near future. You can follow all our updates as it happens on our official Facebook Page – Team RPM. 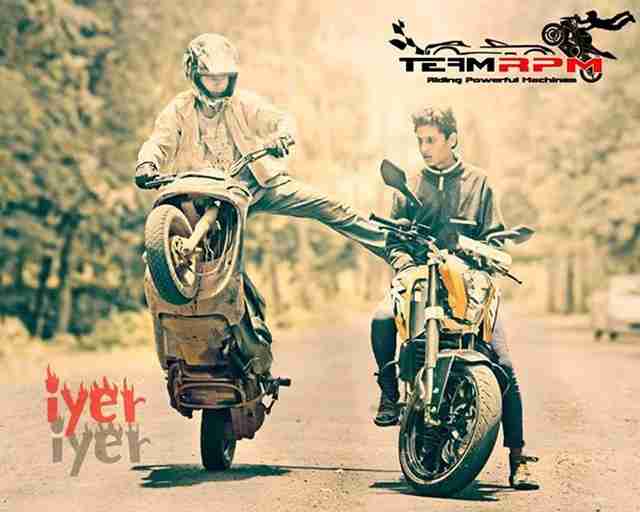 Want to be featured here? Write in to us with a short bio about yourself or your team with photographs to [email protected] for your chance to grab the limelight.