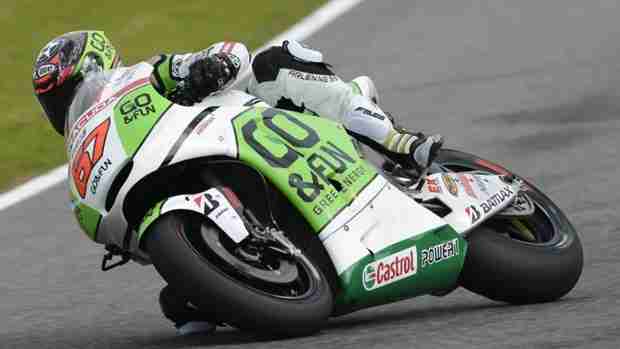 The 65th edition of the Motorcycle Grand Prix World Championship, which started back in 1949 at the Isle of Man TT, gets under-way this weekend in very different surroundings as for the sixth year in succession the Losail International Circuit in Qatar plays host to the opening round. The track on the outskirts of Doha, the capital city of Qatar, welcomes the MotoGP paddock for the tenth year and there will be no brighter bikes under the floodlights than the new Team GO&FUN Honda Gresini RC213V of Alvaro Bautista and the CRT FTR-Honda of Bryan Staring. Bautista heads into the season full of confidence after finishing fifth in the championship last year and especially after the progress made in the most recent pre-season test at Jerez de la Frontera. The work done by the team along with the Showa technicians has been intense and the rider’s feeling with the bike is optim um. Staring makes his MotoGP debut this weekend with a lot still to learn about the championship and the bike, which is much more powerful than anything he has ever raced before, not to mention a much higher level of competition. The Australian has already proven to be a talented and tenacious rider and he is determined to make the most of this opportunity.

“The new season is about to start and I think we are ready. We did a great job throughout preseas on, even though we weren’t helped by the weather in the final session at Jerez della Frontera. Unfortunately we still had some things we needed to test so it would have been good but we didn’t get chance. Anyway, overall we have made a big step from last year. Racing in Qatar is always very special and it’s exciting to go out on track under the lights. It’s a nice track but the fact you’re racing at night and the varying levels of grip makes it strange to ride. I’m curious to see how the new qualifying system works but I think it will be exciting. We’ll keep working to make the bike more rideable and make sure we’re as competitive as we can be for the race. I had a lot of problems in practice last year in Qatar and only managed to finish seventh in the race, which I wasn’t happy with, so this year we’ll certainly look to make up for it.”

“I am nervous and excited about making my debut in MotoGP. After an encouraging test at Jerez I am highly motivated and confident we can do well. I don’t know Losail but I have watched all the races there on television and I’m curious to experience it myself. I have worked hard with the team throughout the winter and gradually I am getting used to the bike, which is very different to anything I have ridden before. I have gradually adapted my riding style to cope with the power of the FTR-Honda and I am ready for this new experience now. Obviously racing at night will be completely new to me too but that just makes me even more excited about making my debut in MotoGP. Hopefully I can have a good race and start the season in the right way.”

“We start again in Qatar with a new season that for many reasons I am just as excited about as my first season in this championship. We have put together a highly professional team that has enjoyed a lot of success over the past sixteen years and in Qatar I will be proud to see our new livery on track. GO&FUN will be our new title sponsor and thanks to the support of the company president Bruno Bollini we can look forward to a lot of success and excitement together. After finishing fifth in the championship last season Alvaro Bautista is determined to do even better this year. We have worked hard in the winter tests alongside Showa and we are ready for a competitive season. Alvaro has the opportunity to show his full potential on a competitive bike in the RC213V and we are as proud as ever of our association with Honda and HRC. For Bryan Staring this is the start of a new adventure and we will try our best to help him make the step up to MotoGP. He has the quality to do it, as well as the determination and the humility. We have put together a bike along with FTR that can do well in the CRT category and we can’t wait to get on track and take on this new challenge. I am confident that the FTR — Honda will be competitive in the new season.”