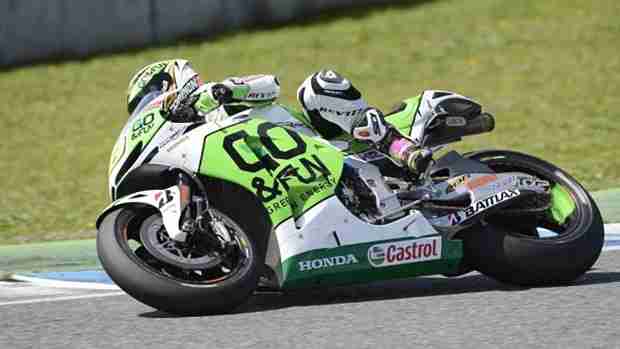 A crash for Alvaro Bautista shortly before the rain came to signal the end of a dry second day of testing at Jerez helped to further dampen the mood of Team GO&FUN Honda Gresini after an otherwise positive sessi on. Up to that point Bautista had been making good progress with his Showa suspension and found some interesting solutions before losing the front at turn 5 and hitting the air fence at speed. The Spaniard sustained slight fractures to the fourth and fifth fingers on his left hand and suffered a right knee strain. An assessment of his fitness will be made tomorrow morning before a decision is made on his participation in the final day of the test. Bryan Staring gradually got to grips with the Jerez layout as he again showed the potential to run with the very best in the CRT category.

“We didn’t need the crash because we were having a good day and getting a lot of work done together with Showa. The latest updates were working well but we didn’t get to finish the programme we had planned. It’s a shame but the only consolation is that we would have had to stop shortly afterwards anyway because of the rain. Unfortunately I ended up with fractures to two of my fingers and a knee strain which has put the final day of the test in doubt. We will let the Clinica Mobile doctors assess my condition in the morning and take it from there.”

“I am really happy because we have been able to make a lot of progress compared to yesterday and, with the help of the team, set some fast and consistent lap times. I have to say that I really love Jerez, I reckon it is one of the nicest tracks in the world and that has given me another push. Now we need to confirm our pace tomorrow and try to show everybody and myself what my true potential is.”