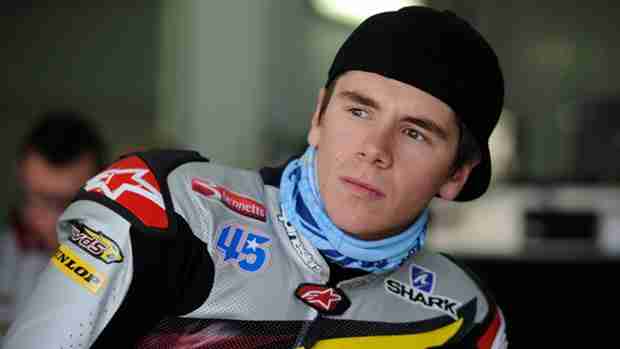 Scott Redding will ride a Honda RCV1000R for Team GO&FUN Honda Gresini next season, after signing a two-year agreement that will see the promising young British rider on-board the Japanese factory’s new ‘production racer’. For Team GO&FUN Honda Gresini it is an exciting moment to be developing a MotoGP project with a young rider who has such a great deal of both talent and personality. The intense period of acclimatisation to the MotoGP bike will begin as soon as the current championship comes to a close.

“I’m delighted to be able to work with a young talent like Scott Redding. We have signed a two-year contract together, with the clear aim of building an ambitious project that should see him develop and be taken to the pinnacle of MotoGP. Scott has already shown that he has a lot of quality and so we are proud to welcome him into our team. We cannot wait to begin working with him; his riding style is great to watch, as is his approach to racing.”

“I am looking forward to the challenge of MotoGP next season. I’ll be racing alongside the best riders in the world, aboard the brand new Honda RCV1000R, so I know already how steep a learning curve it’s going to be. This was why it was so important to me that I made this step with an experienced team, and there are few more experienced in the MotoGP paddock than Team GO&FUN Honda Gresini. But my focus now is on winning the Moto2 World Championship for Marc van der Straten, without whose support over the past four years I wouldn’t even have been given this opportunity to move up to the premier class.”

“I’m really happy that we have signed the deal with Scott Redding. We couldn’t have chosen a better rider. I’ve been following him closely over the past couple of seasons and I think he’s a great talent and represents the future of motorcycling. He is young, fast and full of energy. His riding style along with his own ‘trendy’ look mean he fits in perfectly with the GO&FUN message; energy, adrenaline, intelligence and enjoyment. I am certain that 2014 will be a fantastic season results-wise, and that Redding will be a positive addition to the success of Team GO&FUN Honda Gresini.”