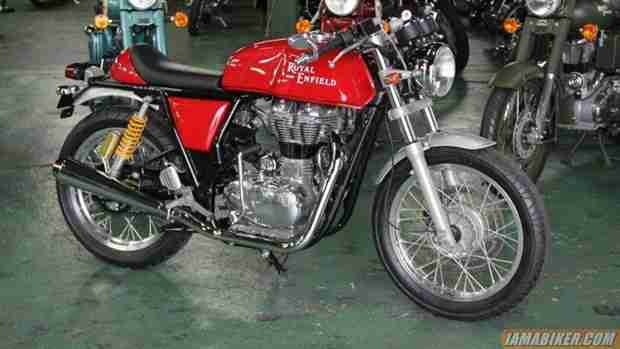 We had earlier reported that the Cafe Racer from Royal Enfield was slated for a mid 2013 launch with the classy looking machine being a 2014 model. Today photographs have emerged that quite definitely confirm that the Cafe Racer project is on track and is in a on-road testing phase, quite similar to the phase where we had caught the TB500 testing couple of months before its launch.

The production version of-course does have a lot of changes to the original version displayed at the Auto Expo 2012 making it a more affordable version. Yes, some would complain that it has lost a bit of its classic sheen and the final or shall we say ‘almost’ final version we see here is still a pretty good looking package and will appeal to a large variety of people. This Cafe Racer has struck a chord with a lot of classic and cafe racer enthusiasts world over and there has been a lot of discussion on what the final version would be like. The engine on the Royal Enfield Cafe Racer would be powered by a single cylinder 535cc Unit Construction Engine (UCE). Although the existing 500cc engine on other Royal Enfield models put out a rather low peak power, the Cafe Racer engine with its slightly higher capacity is expected to have a engine tuned for better power in the range of 34BHP. Key features apart from the obvious Cafe Racer design include Brembo brakes, clip on bars, dual instrumentation, bar end mirrors, rear sets, 7â€³ factory headlamp and a tuned race pipe. The Cafe Racer is expected to be priced in between 2.2-2.5L in India.