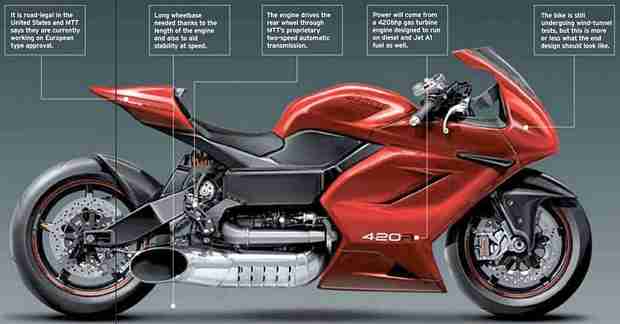 Marine Turbine Technologies (MTT) has just announced that they’re going to launch a new version of the Y2K turbine-powered superbike. MTT’s first Y2K bike was launched back in 2000 and it was powered by a helicopter engine that runs on kerosene and had a wild 320 HP on tap. The new MTT Y2K superbike is powered by a Rolls-Royce C-20B gas turbine engine that develops 420HP. MTT says that the new 2014 Y2K turbine motorcycle will be able to reach a top speed of 420 km/h.  The 2014 MTT Y2K’s engine has been modified so that it can run on both diesel and A1 jet fuel. The new Y2K will have a longer wheelbase so that it offers enough room for the engine while also adding  better stability at high speeds. The new MTT Y2K (2014) is equipped with a bespoke 2-speed automatic transmission. The picture that you see above is pretty much the final version except for changes that can come in to better the aerodynamics. Currently, the 420 HP MTT Y2K has been approved for use on USA roads. Its manufacturer are still working on making it road legal in Europe. The new MTT Y2K is expected to see an official unveiling by July this year. Check out a video of the existing version below.