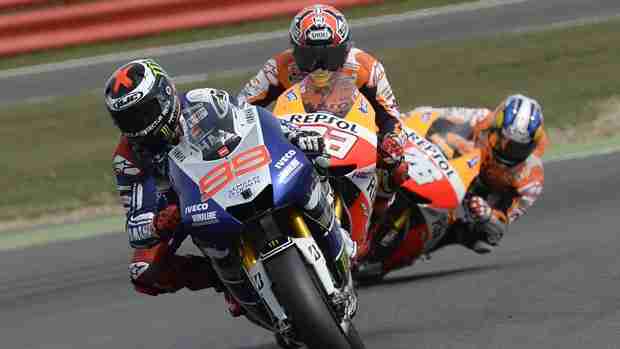 Yamaha Factory Racing’s Jorge Lorenzo rode one of the races of his career to win a thrilling British Grand Prix at Silverstone by the narrowest of margins over Repsol Honda’s Marc Marquez.

Lorenzo got a great start from second on the grid to lead into the first corner and was closely followed by Marquez throughout the race, with the battle heating up in the closing stages of the race. After swapping position numerous times in the final two laps, Lorenzo managed to squeeze past Marquez at Luffield on the final lap and powered away to take the chequered flag a mere 0.081 seconds ahead of Marquez. On the other Repsol Honda, Dani Pedrosa took third place having a set a Circuit Record Lap time of 2’01.941 on lap six. The first CRT rider across the finish line today was Power Electronics Aspar’s Aleix Espargaro, the Spaniard crossing the finish line in tenth place to secure his seventh top-ten finish of the year.

“This was one of the best races I’ve ever had. I’m really happy and really pleased. It’s a very important win. I pushed from the beginning to try and open a gap, even more than in recent races but it was impossible. Marc never gives up, even if he’s a little bit injured after the warm up. He overtook me three laps from the end so I studied him a little for one lap and I saw he was struggling in some braking so I overtook him on the corner where he crashed. I pushed in the last lap to the maximum, I opened a little gap but I made a mistake in braking and almost crashed. When he overtook me three corners from the end I thought it was over again and second place but then he opened a little gap in the last corner so I thought “now or never” and I tried and got it. To be honest I’m not thinking about the championship, I’m thinking just to enjoy this victory which was very special to get then focus on Misano!”

“I’m very happy with how things went today. This morning when my shoulder popped out I thought that my weekend was over, but the doctors were able to put it back in place quickly and that allowed me to be up there at the front, fighting with Jorge. I didn’t feel much pain, because I received an injection to dull the pain, but I was lacking strength and was feeling tired by the end. Despite all this, I was able to battle all the way until the final corner with Jorge, who eventually emerged victorious today. Congratulations to him! For me these 20 points are like a win!”

“I’m disappointed with the result today. I rode well but got a bad start and conceded a lot of seconds on the opening two laps, so I had to really push in order to recover ground. I gradually caught up with Marc and Jorge, but I wore my tyres out in the process and at the end of the race I lacked grip on the right-hand corners. I tried to calm down and slow my pace in order to lower the tyre temperature, although finally I wasn’t able to match their performance. That meant that when I attempted to pass the bike slid out a lot and I was unable to really get involved in the fight for the win. I will have to give it another go at Misano.”

“For me this result is a bit more positive than in Brno. Every time I come here I have a bad result, this time we worked in a different and better way. The fourth place is better than in Brno, but it is still a fourth place. Unfortunately I made a good start but in the first laps the other guys between the second and seventh lap were a lot faster than me, but the second half of the race was not so bad. We will continue to work hard, we never give up and are not so far now. We have a constant pace and we are nearly there but we need to go a bit faster, we still have to work to improve our pace. We made a modification between warm up and the race that gave me a better feeling with the front.”

“Unfortunately once again I have had to concede to Valentino but we had a lot of fun out there. The last lap was really nice because we overtook each other several times but unfortunately I couldn’t make it stick and he beat me by just 0.065 seconds! That’s a shame but I am happy anyway because I have improved my feeling with the bike again here, we were able to make up a lot of ground at the start of the race and confirm our recent good form again. We just need to take another little step to be even more competitive but it is coming. Hopefully we can have another nice race in the next Grand Prix at Misano, the team’s home race.”

“I feel like we had the same race of Brno last week because we were facing the same problems. We struggled on the edge of the tyre and no drive out of the corners and this is a bit disappointing for me because I am really strong on braking. We have to analyse why we can do a better speed in the practices on used tyres and not in the race. Of course we expected a better placement today but there’s no time to complain now: we must work harder to find a solution ahead Misano GP”.

“Honestly I’m pleased the weekend is over and at least we finished the race. It certainly wasn’t the easiest race I have ever done and it is disappointing that I couldn’t challenge. But after the crashes I just had no power at all in my right arm and I was also lacking grip at the start when the tyres were cold. Unfortunately that is what happens when you crash three times in a weekend. I didn’t give myself enough time to get laps under the belt to set the bike up properly. The only positive we can take away is that we have been faster than last year. But it’s definitely less than what I hoped for when we arrived at the track on Wednesday. Congratulations though to Jorge, Marc and Dani because they put on an incredible show today and had fantastic speed. I’d have loved to be up there with them and now I’m just looking forward to a few quiet days at home before we go to Misano where I hope to fighting closer to the front again.”

“I was going fast in the warm-up this morning but I had a high-speed crash that really beat up the bike. I had to use the other bike in the race, but even though it had an older engine, it worked fine and I had a good battle with Bradley and Dovi. I had hoped before the race that we could really do something better than that, but I think eighth place was about the maximum that was possible today. The team is really working hard, and they improved the bike a bit for today. We’ll keep rolling and try to do a step forward.”

“I was very pleased with my start and we decided to race with the softer rear tyre option, as we were lacking a bit of grip during the whole weekend. I wanted the sun to come out but unfortunately the temperatures remained cold and after just three laps we already knew that the race would be difficult one. Probably the hard tyre would have been the right choice but we did not have enough time to evaluate it yesterday. We did what we could and even if I didn’t want to finish behind Nicky, I decided it was safer the finish the race after Andrea crashed out just in front of me. All in all it has been a tough weekend but riding in front of nearly 75.000 British here today has been an incredible feeling.”