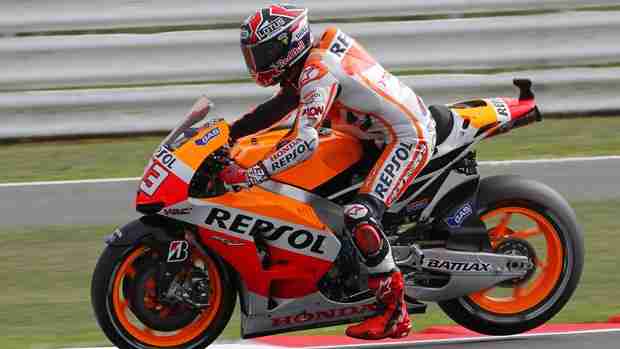 Repsol Honda’s Marc Marquez delivered another devastating display of speed to smash the outright lap record at Silverstone today by a phenomenal 1.329 seconds to claim his fifth pole position of the season.  Marquez was embroiled in a heated battle with Yamaha Factory Racing’s Jorge Lorenzo for pole position, the pair trading the top spot until Marquez delivered the knockout blow — a 2’00.691 – on his penultimate lap. Lorenzo’s impressive time of 2’00.819 secured him second on the grid for tomorrow’s race ahead of hometown hero Cal Crutchlow, who piloted his Monster Yamaha Tech3 M1 to third with a best time of 2’01.425. NGM Mobile Forward Racing’s Colin Edwards continues his recent resurgence to claim CRT honours at Silverstone, placing eleventh overall with a personal best lap time of 2’04.032. Today’s enthralling qualifying sessions saw the top five riders in QP2 set lap times under the existing Circuit Best Lap record.

Ambient temperatures were cooler today, with a strong, cold wind in the morning creating challenging conditions for the riders by affecting the ability of the tyres to warm up and retain temperature. The prolonged sunny periods helped maintain similar track temperatures to yesterday however, with a peak of 37°C recorded in QP2. The softer slick options front and rear were preferred in the chilly morning session while in the half hour FP4 session just before qualifying, all slick options were utilised as many riders graduated to the harder slick options front and rear. The preferred tyre combination for the time attack in qualifying was the softer rear slick paired with the harder front. The harder, medium compound front slick is likely to be the preferred choice for the race, while rider feedback suggests that both the softer and harder rear slick options will be on the grid as the lights go out for tomorrow’s race.

“I am very happy with pole position and this one carries even more value as we set a new record! The lap times were very fast, we managed an incredible lap and Jorge [Lorenzo] set the bar very high for us. We put in a better hot lap than I had expected; I hadn’t anticipated riding so fast! The race will be tough tomorrow and we will have to remain very focused, because I think that Jorge is the strongest rival that we have here. We will need to get a good start and see if we can stick with him.”

“It’s not fantastic because we didn’t make pole position. I was surprised about the improvement from the pace lap to the qualifying lap, it was a big jump, almost one second and a half. When I saw my lap time on my bike I thought I made pole position but when I saw the classification I saw P2 and was disappointed as I put all my effort into the lap, but it wasn’t enough. Race pace is good but we have to see where the others are tomorrow.”

“Well that was just a normal Saturday for me at Silverstone! After what happened in 2011 and 2012, the last thing I needed was a crash, so to have two made it even worse. Both were very fast crashes and I am thankful not to have been injured, though my right arm is covered in abrasions and is quite painful because of the swelling. The first crash was my fault because the front tyre was too cold. And in the second one, with my arm hurting, I just couldn’t hold on when the bike starting moving around on the brakes. I’ve got to say a massive thanks to my Monster Yamaha Tech 3 Team because they put in an amazing effort to at least get me out this afternoon. After all that happened this morning it feels great to be on the front row, but the gap to Marc and Jorge is pretty big and it will be tough to beat them tomorrow. I’ll be giving it my all though because the support from the British crowd today really spurred me on. They’ve really got behind me and it was a good feeling to bounce back from the crashes to get a front row.”

“We improved our pace today and drew some positive conclusions from practice. However, in qualifying things didn’t go that well for us. I made a couple of mistakes and was unable to get a better starting position. We will start from fifth, so the important thing for us will be to focus on getting the setup right, putting in the maximum effort to get a good start and have a strong race.”

“For sure this is the place we deserve because we improved a lot from yesterday and we finally achieved our target. This is a good sign because, in the last two rounds in Indianapolis and Brno, we were fast on Friday but we dropped off a bit on Saturday so I am quite happy about this qualifying session. I could push and ride the bike as I would like and must thank the team for their efforts: it’s nice to start from the front again.”

“I’m not so happy with the distance from Lorenzo and Marquez, they did a fantastic job but I’m happy about the second row. It’s very important and better than the third row. My lap time is quite fast but especially I’m quite satisfied with today because we improved the setting of the bike this afternoon and I’m a lot more constant with pace. I can stay with a good pace which is important for tomorrow. Now we have to try to make another step, I have two or three corners where I’m not so strong and I’m suffering on some bumps. Tomorrow we will try to improve.”

“I’m really pleased with my time. We all set good times, and I doubt if anyone could have expected we’d be able to lower them so much. Maybe the track improved a bit, but the new tyre also made a big difference when we didn’t have much fuel. We’ve worked well the whole weekend, and I’ve been pretty fast. I think our race pace is still quite a way off, but we’re certainly going better than we have at the other races so I think if we’re able to have a consistent race, we might have a smaller gap to the leaders. It might be an unusual race because the tyres drop off after about six laps. You couldn’t see it much in practice, but I think that the same thing as last year will happen.”

“We’ve definitely improved a lot today, but everybody is going faster as the track gets better. I’d hoped to do a low 2’02”, which I did. I thought maybe I could squeeze onto the second row, but one tenth made a big difference today. I made one little mistake on my best lap, which hurt me a little bit. Also, I have a hard time using the hard front tyre, so I chose to go with the soft front, which was better over the bumps but was also moving in some places. We need to try to make that work for the race and do a couple of little things to help with change of direction. We know it’ll be tough, but we’ll see what we can do.”

“Today we worked to solve the grip problem that we have been having, and we found a partial solution this morning. In the afternoon we continued in the same way, trying out the hard rear tyre, but we couldn’t find any improvement. In qualifying we went back to the setting from the morning, but the bike didn’t replicate the performance that it had this morning, and that made things difficult again. I can’t say that I am happy but the race is tomorrow and, if we get a good start and find a good pace, I am still convinced that we can have a strong race.”

“My lap time is something to be really proud of today because we made a big jump compared to the rest of the weekend. The overall result is not what we expected but going into QP1 showed we have been having a tough weekend. So to end up close to the top six is positive but that gap to the front is obviously a big step. I still believe we can make another step with the bike for tomorrow. It will be a long race but it might be an advantage to be able to follow and learn something because on this track it seems easier to chase than make a lap time on your own. It has not been an easy weekend but I’ve not made any mistakes and got faster every session, so I am looking forward the race and rewarding the amazing support from the British crowd.”

“The bike was giving me confidence, but I was unable to interpret the track in the best possible way, losing a lot of time on certain sectors. It is clear that I am unhappy with how things have gone, but in any case tomorrow I will push hard to have a good race —even though it won’t be easy.”