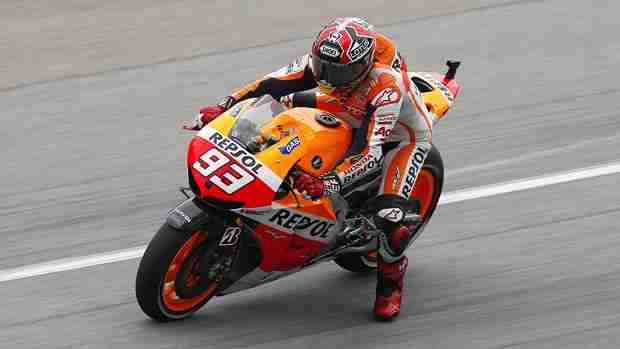 Repsol Honda’s Marc Marquez set yet another qualifying lap record at Sepang, the current MotoGP championship leader clocking a time of 2’00.011 to shave three-tenths of a second off the existing mark.

Marquez claimed his eighth pole position of the season on his last timed lap and will line up on the front now next to a pair of Yamaha riders. Yamaha Factory Racing’s Valentino Rossi’s time of 2’00.336 slots the nine-time World Champion in at second on the grid for tomorrow’s race, while Monster Yamaha Tech3’s Cal Crutchlow was third quickest and a mere 0.023 seconds behind Rossi. Power Electronics Aspar’s Aleix Espargaro topped Qualifying Practice 1 and showed strong pace in QP2 by qualifying in ninth place with a time of 2’02.151. 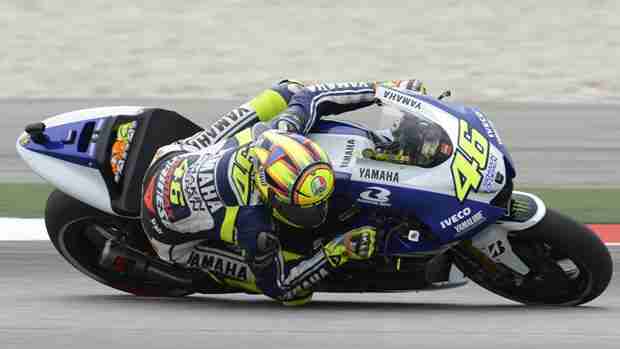 Conditions were predominantly dry today, the exception being a rain shower at the end of QP1 which caused a premature ending to the session, and caused created greasy track conditions for the start of QP2. Track conditions improved throughout the second qualifying session, with the pace being the quickest of the weekend and most riders using the combination of the softer front and rear slicks. Some riders assessed the hard compound front slick tyre in practice, although the softer front and rear slicks are still preferred by most riders and will be the most widely used options should the race be dry. The final session before tomorrow’s race is the Warm Up session at 1140 local time (GMT +8), with the twenty lap Malaysian MotoGP race set to start at 1600.

“Qualifying today was difficult to tackle, due to the rainfall, but in the end we all opted to go out on slicks. I was not able to clock the best time but I am happy with the pace that we have had during practice. Let’s see if tomorrow we can get a good start in the race.”

“I’m really happy with this pole position, particularly as earning it was a little different to with my previous poles. At the start of qualifying there were two completely wet corners, which made it hard to put in a hot lap as we had to calculate the amount of risk â€’whilst still maintaining our speed. I knew that the final lap of the session would be definitive, because the surface was drying out and conditions were getting better by the minute. Things worked out for us and I set a time that I really wasn’t expecting. Tomorrow will be a different story, because Lorenzo and Dani [Pedrosa] both have a great pace, so we shall see if we have a bit of good fortune and the conditions remain dry.”

“I’m very happy about today, from this morning we really improved the bike. We worked hard with the team this weekend and I like the set up a lot, I can really push and have a good pace. Just before qualifying it started to rain and everything became more difficult. I expected it to be full dry but two or three corners were not, I had a big moment on the first lap and I was very happy to not crash, I have to say thank you to my Yamaha! After that I tried to push and I made a very good lap time, especially considering the conditions. Now we wait for tomorrow and I hope it will be dry because I think in the dry we are very competitive.”

“Today we improved the bike a lot and I feel much more comfortable than yesterday. I did a long run in free practice which went quite well. Then before qualifying we changed the bike a little and we were able to improve it further. The problem was in some corners, especially in turn six and turn seven as it was wet. On my second lap I almost crashed there so I didn’t trust the corners to be able to make a perfect lap.”

“The second row is not bad considering what a tough day we have had today. We worked hard this morning to improve our pace and made a little progress but not enough. We worked on a different setting in the final free practice this afternoon based on what we used in preseason testing and it felt good but it only lasted for a lap because we had a little problem. So we went out in qualifying not feeling entirely confident with the setting and with the track conditions being less than perfect in a few places because of the rain. Overall if things hard worked out better for us I could have gone much faster but the second row is still important. We have a few things to check with the setting in the morning warm-up and then hopefully we can have a strong race.”

“I am pretty disappointed to be honest because we have not made much progress on the lap times we set here during pre season testing. I can’t honestly explain exactly why this is but clearly we’re not fast enough. Hopefully we have a turnaround overnight.”

“I am really happy to be back on the front row because it was not an easy session at all. It was hard with a dark visor to see where the track was wet and in some corners it was pretty tricky. It was a bit of a lottery with the damp sections and I think it came down to who was willing to take the most risks right at the end when the track was improving. Today’s result is a great reward for my Monster Yamaha Tech 3 crew because they have done a brilliant job giving me a very competitive package this weekend. It has been tough for me physically because of the pain coming from my right arm. I first damaged it at Silverstone but the pain has been pretty bad this weekend and I’m a bit surprised because I felt nothing in Misano and Aragon. The swelling is pretty big but I am really motivated for tomorrow’s race. It is going to be a very tough race in the heat and humidity but hopefully I can put up a good fight. It will be hard for the tyres as well because 20-laps is a long race and the tyres have been going off quite quickly.”

“Today was the first opportunity to see how much I have improved compared to the tests I did here in February. Qualifying was the first time all weekend when I ran low fuel and new tyres like we did in testing and I am happy with the performance to finish seventh. The conditions were not ideal at all and it was a bit sketchy at Turn 6 and 7 after the rain showers. The team though did a great job and I’ve done some longer runs to check tyre life and I’m happy in that area. We have also improved my feeling with a full fuel load, so hopefully I can have a strong race. It will be hard to fight for the top six but my aim will be to get a good start and go with the leading group in the early stages to try and learn as much as possible. A big plus this weekend has been that we have improved in every session and made good progress with the bike set-up, so I’ve got more confidence for the race than normal.”