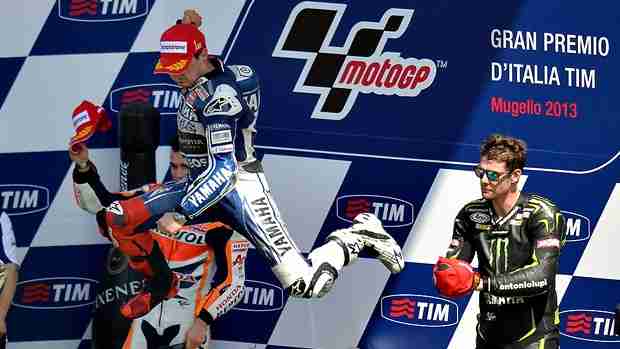 “The conditions and the circumstances were good for us and I didn’t make a mistake, I made my best performance even if the conditions were much hotter than this morning. We are still struggling so much when the conditions get hotter. Anyway the key of the race was in the middle where I improved my riding, I was able to brake later with less fuel in the tank so I was able to improve the lap time by two tenths, from this moment Dani gave up a little pace and I could get away and win the race, more or less like last year. It’s very special; I won the last three years here so this track is magic for me and very positive for Yamaha. It also reminds us to keep working on the bike as at the tracks which are not so flowing like Mugello we will struggle. I’m very happy to give this win to Yamaha Motor Racing President Shigeto Kitagawa because this was his last race here in Grand Prix, as he will retire. He has done a great job for the team in the last years and it is a big loss for us. I hope he will enjoy the different life he will have. Our president Yanagi-san is also lucky for me, I won the 2010 Championship in Malaysia when he was there on the track and again today a victory with his presence.”

“Unfortunately in the start I had a problem with the clutch spinning and I lost two or three positions. Then I was attacking because we had a good pace and I was fast. On the second corner I was on the outside already in front of Bautista. For me, from the inside he opened the throttle to close the line so he doesn’t lose another position but I was already in front so he came to me and took me on the boot. I was lucky because it was a bad crash and I arrived at the wall but I’m ok. We will try next week in Barcelona, but it is a pity because firstly it is Mugello and secondly I think we could have done a good race and maybe arrived on the podium.”

“I didn’t feel fully comfortable in the race today, but I’m happy because I was able to gain a large number of points. In general, this was a difficult weekend. The back tyre was giving me a lot of problems with grip but taking 20 points from this race and maintaining the lead the World Championship is something positive.”

“Today we finished with our first DNF of the season, but after three difficult days of setbacks and hard work, I finally felt good during the race. I don’t fully understand why I crashed, as I lost both the front and the back at the same time and was unable to save it. It’s clear that we made a mistake, but we can’t go looking for excuses. We’ve looked at the telemetry and it shows that I was going at the same speed and on the same line as before but, anyway, you learn from these mistakes. We can’t forget that this is my first year in the class and I am here to learn how things are in MotoGP. In spite of everything we were still fighting for second place, which is a reason to be happy. I want to apologize to Honda and to the team, as they always support me and work so hard. Now we are turning our focus to Montmelo, and I can’t wait to race there.”

“Repeating the fourth place of last year is a very special feeling for me and the team. Actually I am happy about the job we have done throughout the whole weekend but the race was a bit tough. Honestly I did not take a brilliant start, losing some positions. After that I had to overtake the Ducati guys. It was not easy to relegate them and I knew that Dovi would try to pass me in the last lap. He is a strong rider and I really enjoyed the battle with him. I must thank the whole team and our partners and fans for their excellent job and support because I know this a special race for Lucio and his collaborators.”

“There is not much I can say really. Unfortunately in turn three I made contact with Valentino and we both crashed out of a race that was very important for both of us. Valentino and I have watched the incident back together in race direction and it was just a racing incident that leaves us both with a bitter taste in the mouth but neither of us is to blame. I was on the inside and it is very difficult to see a rider on the outside from there. He was taking a slightly different line and that’s why we came together. It’s a shame because I felt good on the bike and it’s a positive result. These things happen but we have to forget about it and try to think about the next race.”

“I am really happy to be back on the podium because Mugello is one of the blue riband races on the calendar and that makes it feel a bit more special. It is an awesome result and I have to pay a big tribute to my Monster Yamaha Tech 3 crew who did an incredible job this weekend. I’ve not felt comfortable on the bike but today they gave me a package that was really competitive. In the second half of the race I was really strong and consistent and I could see for the last 10 laps I had the pace that was bringing me closer to Dani and Marc. I was in a really fast and consistent rhythm but I hate to be gifted a podium like that. I’m sorry Marc crashed because he was doing an amazing job again but to be honest I felt I could have caught Dani and taken third anyway. When I saw Marc crash I slowed down to not risk losing a second podium in a row, which is a fantastic achievement for the Monster Yamaha Tech 3 Team and me. I’m fourth in the Championship, top non-factory rider again, so it has been another great way to finish the weekend and continue our very strong start to the season.”

“To be honest ninth position was obviously a really good result considering the circumstances of today. This morning’s crash was the last thing I needed, so to be able to go the whole race distance with just one mistake was positive for me. I had a lot of problems with my left hand as well as with my wrist and it was magnified with Mugello being such physically demanding track. So I believe I did a really good job. It would have been good to beat (Aleix) Espargaro at the end but considering the whole weekend I should be satisfied with another top 10 result. After a very difficult weekend for my body I just need to rest as much as I can to put me in the best possible condition for Barcelona. We still learned a lot during these tough days, especially from the big crashes, but I suppose that’s all part of the game on my way to becoming a better MotoGP rider.”

“In terms of gap to the front and finish position, this is the best result that we could realistically expect. It was a really tough race, like always at Mugello. I gritted my teeth to try and stay with Bradl until the end, and I had a nice battle with Nicky. Unfortunately, I lost the fight with Bradl on the last lap, but it was fun–we passed each other four times! In the practice sessions, we’re able to do good times, but I think that fifth place at Mugello is the best we can do with our current package, so we still have a lot of work to do.”

“I had struggled with grip this weekend, but the team did a really good job of making the bike better in the race, and with some other people’s misfortune, I was able to fight for the top five. In the end, to end up sixth isn’t fantastic, but I had a good battle with Bradl and Dovi. They’re both good guys to race with, so it was fun, but then in the last two laps I developed a lot of chatter and had to back off.”

“Right from the start, I was having lots of problems with rear grip–so much so that I considered stopping after the first four laps, as the situation was really weird. I’ve never felt the slide the rear so much for no reason. I hadn’t had this problem throughout the entire weekend, and not even this morning in the warm-up. After returning to the pit at the end of the race, we immediately checked the telemetry, and you can clearly see that compared to this morning, there was no grip. I was struggling every time I braked and coming out of all the corners, even when I backed off the throttle. At the moment, we really have no idea what the problem is, but we kept the same setting as this morning, when I had a good pace. The only thing we changed before lining up on the starting grid was the tyres, so for now, if we analyse how the bike was behaving, that’s all we can think of. Now Ducati is going to work together with Bridgestone to try and get a handle on what happened. Obviously, all I can say is that it was a major disappointment; after the warm-up, I was happy; we had a good pace to have a good race and stay close enough to Hayden and Dovizioso, but it just didn’t turn out that way. Now we’re thinking about Barcelona, another track that I really like.”