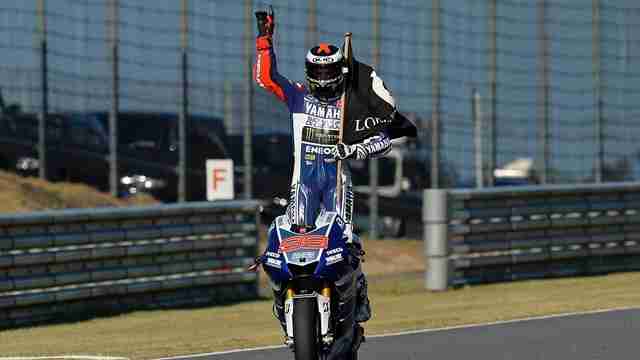 This MotoGP season could not have asked for a better race weekend simply because it opened up the championship in the Moto3 and the MotoGP races and takes the championship down to the last race. In the MotoGP championship things are still in favour for the rookie rider Marc Marquez and he just needs to finish fourth or above to take the championship. An easy task for him most likely as he has been on the podium for almost all the races this season. Yamaha and Lorenzo might be hoping that the pressure of championship on Marquez could be a factor that could give them an oppurtunity. The dramatic Motegi weekend was dominated by complicated weather conditions which meant that the only dry set up time for the race was in the morning in the final warm up session.

Lorenzo rose to the occasion, firing off the start line like a bullet to lead the race into the first laps. The Mallorcan was able to build a gap of nearly two seconds in the first three laps then saw it cut as championship rival Marc Marquez closed in. Marquez and Dani Pedrosa were able to get onto the heels of Lorenzo but unable to pass. The defending champion held on to the line to score his 51st Grand Prix victory, crossing the line just over three seconds clear of Marquez, also completing 200 wins for Yamaha in Grand Prix.

“We chose the soft tyre and the others chose the hard tyre, we knew that at the end of the race we might have problems but finally I could push even more the lap times. The strategy could have been different but to take this win at the home of Honda makes me very happy.”

“Second place today is a very good result. After my crash in warm-up, I knew that it would be difficult to be consistent â€’because in the morning I hadn’t managed that either. This was my first time at this track with a MotoGP bike and in practice I was unable to get any references in the dry, leaving me with only the warm up and the race in which to find my way. I saw that Jorge [Lorenzo] was a little stronger than us here and I had a couple of scary moments, making me decide that twenty points and the gap being reduced by only five points would be a decent result. There is only one race remaining â€’the most important of the yearâ€’ so we shall try to be more focused than ever at Valencia.”

“It was a bit of a boring race for me, because I tried to give everything but I had a lot of problems exiting the corners; I was unable to get on the gas fully and I lost a lot of time to Marc [Marquez] and Jorge [Lorenzo]. I was third for the entire race, trying to hold onto them. However, at the midway point of the race my pace started to become slower than theirs. Now we have to focus on the next race, in Valencia, where we shall try to do as well as possible.”

“After such a strange weekend with everything that has happened and the two crashes — one yesterday and one this morning — the race was more than positive. I felt comfortable with the bike this morning but the crash definitely didn’t help and the start wasn’t perfect either. I hadn’t done a single lap with the front tyre so I wasn’t sure how it would feel or how hard I could push it but I built my rhythm up, made some passes and picked up a solid fourth place that could perhaps have been something more if we’d had a better start. Anyway, it is a good finish to a chaotic weekend and that is the most important thing. We have consolidated sixth place in the championship and now we need to keep working to take the next step with Showa, Nissin and Honda. We owe it to everybody that supports us, but especially GO & FUN. ”

“It has been a “crazy” weekend for everybody but, at the end, we had a dry race and I am happy about my result. I was more cautious compared to the other guys but I took a good start from the third row. At some point during the race Bautista caught me but I could feel some pain in my ankle due to the movement of the bike. Actually my ankle is at 85% and for me it was a long and tough race so we must be pleased with this 5th place”.

“I made a great start but on the second lap when I arrived at turn 11 I had not enough power on the brakes and I went too deep and lost two positions. On the next lap it was the same. It was my mistake then because I should have remembered from the lap before that I didn’t have enough on the brakes. I couldn’t stay on the track and lost a lot of positions. After that I tried to do the maximum. My pace was quite good and think I could have been in fourth place but it wasn’t enough to get on the podium.”

“It was a very difficult race because from the first lap I realised I was having an issue with the front brake overheating and choosing the harder rear tyre was not the best choice. Bradley used the softer tyre and in the first few laps, the problem with the brake meant I was having to focus on not running into is the back. My tyre was good for the second half of the race and I could pass Bradley but when Valentino came through he was a bit faster. We were just missing a few things to be more competitive but even with the soft tyre like Lorenzo, I wasn’t going to be racing at his pace. He really did a great job. The positive is with today’s result assured the fifth position in the Championship, and my target before the first race was to finish best non-factory rider. Now we can go home and get some rest after a tough period before trying to end the season strongly in Valencia.”