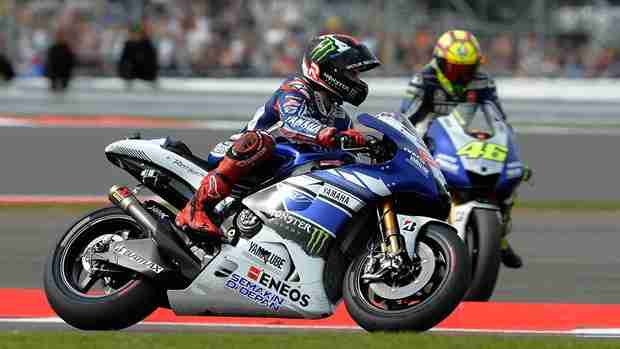 Following a short but well-earned one-week break after an intense three consecutive race weekends, MotoGP now head’s to the Misano World Circuit Marco Simoncelli for the Grand Prix of San Marino on the 15th September. Situated on the Adriatic coast close to the city of Rimini, the Misano World Circuit Marco Simoncelli was first constructed in 1972 and was a frequent host to the Italian Grand Prix in the 80s and 90s. A leave of absence came to an end when the race returned in 2007, with Yamaha proving to be the most successful constructor since that year with four of the six race wins and an unbroken podium run.

The event the second of two this season to be held on Italian soil is also particularly important for Andrea Dovizioso, who was born in nearby Forlimpopoli, and this will mark the Italian’s first time racing there aboard the Ducati Desmosedici GP13. Valentino Rossi returns to his home race looking forward to riding Misano again on a Yamaha. The nine-time world champion has two premier class MotoGP victories at Misano with Yamaha in 2008 and 2009 and two further podiums, finishing second last year and third in 2010. The MotoGP series leader comes into the race with an enviable record: He has won at Misano for the last three years —in 2011 and 2012 in Moto2, and in 125cc in 2010, and placed fourth on his first two visits —in 2008 and 2009. With more than a week off after the British Grand Prix, the Repsol Honda Team rider has been able to rest up and undergo physiotherapy to regain fitness, having dislocated his left shoulder in practice at Silverstone. Teammate Dani Pedrosa will attempt to put some demons to rest at the track: Knocked down on the opening lap last year, he has won before at Misano. He has also been able to rest and continue with his recovery from a collarbone injury. Lorenzo’s results at the Misano circuit have been consistently impressive, winning for the last two years and taking three consecutive second-place finishes prior to that. He also claims a 250cc win in 2007 meaning he has finished on the podium at Misano every year since 2007. Just a few kilometres away from the Misano World Circuit Marco Simoncelli is the San Marino headquarters of the team’s main sponsor GO & FUN, whilst even closer to the track is the Gresini Racing workshop. There could be no larger incentive for Alvaro Bautista and Bryan Staring then as they look to score positive results and in the case of Bautista continue an excellent run of form that started before the summer break at Laguna Seca.

“I’m already feeling much better since my accident in Silverstone, so hopefully I’ll be almost 100% by this weekend! I will arrive in Italy for the race weekend a little later than usual as I will use the time to have more physiotherapy on my shoulder. Misano has a lot of braking and is a smaller and slower track compared to others on the calendar, so it will be interesting to ride the MotoGP bike there. Once again, the aim is to start to work like always, focused on Sunday and prepare ourselves in the best way.”

“I was slightly disappointed after Silverstone as we knew we had the speed and race pace to challenge for victory, anyway we must learn from the mistakes and move on. Misano is quite a tricky track and the grip level is always a challenge, but I enjoy riding there. I’ve had good results in the past even if last year we experienced a nightmare on race day! This year we arrive confident and looking to reduce the points to Marc in the Championship.”

“I feel strong again like I was at MontmelÃ³ and Mugello before the crash. The performance at Silverstone was really good, the only weak point there was the top speed compared to our rivals, but at last we achieved a great victory against Marc. I thought it was pretty difficult to beat him when he overtook me but finally I could get the win and it was fantastic. Misano is a track I enjoy a lot and also the Yamaha is comfortable there. My next goal is to fight for the victory once more and think race by race, improving our pace step by step.”

“Misano is next and it is my home Grand Prix and an important weekend. I like the track, I always go fast there, especially with the Yamaha and last year also I was able to do a very good race. In the past I was always on the podium with Yamaha. We will arrive very strong and we will try to do our best.”

“We had another fantastic weekend at Silverstone, working hard with the team on the setting of the bike, which wasn’t ideal on Friday. We managed to put together an excellent race, not far off the back of the lead group and I really enjoyed myself in another great battle with Valentino, who finally beat me by a matter of a few centimetres. Our current run of form is very positive so we have to keep doing the right things and this will keep us moving forwards. Misano holds some good memories for me and it is also my team’s home track. I have been on the podium there many times, including my first in MotoGP last season after a big battle with a bunch of riders but especially with Dovizioso. This year it won’t be easy because the level in MotoGP has gone up another notch but we will try our best to continue our excellent moment. The goal is to close the gap even further to the top three and try to break them if we can. It is not a great track for overtaking and overall it is quite slow, despite a fast section at the end. It will be important for us to concentrate hard from the start on finding a set-up with good stability under braking and plenty of acceleration out of the corners. This is a more important aspect at Misano than top speed.”

“We did a couple of days of testing there one month ago so we should be able to start with a good base and I think we can make a good race there. Misano is quite a slow circuit for the MotoGP bikes, but I like this track because it’s special for me. I made my first race there after moving up from minibikes, it went in a different direction than now, but for me Misano is always Misano!”

“Misano will be a bit bitter sweet this year, as it’s my last GP in Italy for the Ducati Team. I can’t say I exactly love the track as I haven’t had great results there, but the atmosphere is great. It’s quite a difficult track because it’s pretty bumpy with average grip. We had a test there a couple months back, and maybe we can start the weekend off closer to the rest.”

“The Grand Prix of San Marino is an important event for me. I know the track well and with this being the team’s home race I really want to give everything I can to make sure we celebrate with a good result. I want to put our recent disappointments behind us with a performance that sets us up for the final stage of the season. With the help of the team I think I can achieve the objectives we have set ourselves for the weekend ahead.”