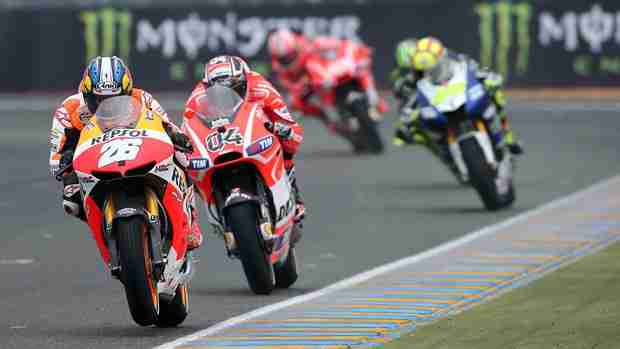 “I’m very happy, because I have earned an important victory. I’ve been trying to win at this circuit for many years in MotoGP and it has always been a tough track for me. Today, the moment finally arrived, when I least expected it, and it is immensely satisfying. Conditions here are usually against me, because it is cold and I don’t like riding in these temperatures, but today I got the best out of myself. The bike was also good, above all on the opening laps when the track was very wet. I made a few mistakes but I was able to recover from them, maintain the advantage and win the race. I’d like to thank all my team and also my supporters!”

“I’m really happy to get my best ever result in MotoGP and the whole team did an incredible job and deserves this result. We showed our fast pace in the dry, we showed our pace in the wet and I think everybody is aware we are not here through luck. It’s even better and more important because this is the home race for Tech 3 and Monster Energy sponsors the event. So to be the best and only Yamaha on the podium feels really good. My start was not the best and it took me a bit of time to get temperature into the tyres. But once I managed that I felt really comfortable. When I saw Andrea and Dani opening a small gap to Valentino I had to make a move because I was afraid they would be too far ahead to try and catch later in the race. And when I saw Marquez recovering time on my pit board I had to pass Andrea otherwise he might have caught both of us during the last laps. I’m really happy with how things went, especially after the crash yesterday. The wet track obviously put less stress on my body but it was tough riding injured in such tough conditions. From now on I just hope we can be injury free and go to Mugello to put on the same show as we did here today.”

“This podium almost counts as a win as it was my first wet race in MotoGP and I wasn’t expecting to finish in the top three. Also, bearing in mind that I had dropped quite far back from the front, third place and 16 points is an important achievement for the World Championship. We can say that this was a very good weekend; we had a good setting for the dry, but when it rained it was up to me to learn from the mistakes that I made at the start of the race. I need to improve, because I was finding it hard to ride with water on the track. It will be difficult to maintain our performance at Mugello, but we will go there and try 100%. I congratulate Dani on great race and victory and I’d like to thank the whole team!”

“It’s always nice to be at the front of the pack! I’m really happy with my feeling with the bike, and as long as the tyres were decent, I was able to manage the situation well. Dani had more than I did, but I was still able to keep a good pace. We had good grip, which helped us to have a nice race, but as the track dried, the tyres began wearing a lot. I couldn’t keep the pace in the last six or seven laps, and unfortunately, I wasn’t able to make the podium. I’m sorry for the team about that, but we had a positive weekend in all aspects, even in the dry.”

“Rain races are tough, especially when you don’t have much time to set up the bike! I got a great start and picked up some positions in the first few corners. I didn’t feel great at first, but I began to improve and was closing on the lead group when they were battling with each other. I really enjoyed that, especially when the track was pretty wet. Things got more difficult as it dried, but I was hanging in there. I was looking for a way past Rossi, and when he crashed, I picked it up and ran wide. I put my head down and tried to close the gap, but I made a mistake, and after Marquez got by, I just tried to stay up and get to the finish. Top-five is our best result of the season, but for a while, I thought I had a possibility to do something really good. Still, there were moments this weekend when we showed more potential than we have all year, and I’m really looking forward to Mugello.”

“In the beginning of the race the bike was not the same as warm up but not so bad and I could follow Andrea and Dani. I was losing a lot in some areas of the track but recovering in others. Then after three or four laps the bike got worse and I got problems everywhere. In the braking because in the middle of the corner I didn’t trust the rear tyre and in acceleration because the rear was spinning so much I lost nearly half a second compared to the others. Races are like this sometimes; last year I won by 20 seconds with a very good bike and this year was completely the opposite. I couldn’t do much more without crashing.”

“Unfortunately we lost a good chance to get a good result today, I think we had the potential to arrive with the first three and arrive on the podium. I had a good pace and I was fast and I could fight with the other guys. In that corner, I didn’t arrive too fast and didn’t feel any mistake but I felt a bump and lost the front, so it’s a pity because we lose points and especially the chance to try to make a good podium here. Anyway, it can happen and the important thing is that today we were fast so we will see next week.”

“That was a particularly difficult race because the conditions were so different to how they’d been for practice. I also didn’t get a great start and that was a shame because looking at the lap times it cost me the chance to fight at the front. When the track started to dry the bike was cutting the power on the straight and I was losing time but sixth place is a positive result if not a great one because we’ve improved on last year and I don’t like this track. Overall we have made progress here and I feel better with the electronics and suspension in the wet. I am satisfied with the result and I want to thank the team and the sponsors. This is a nice boost before we go to their home race at Mugello. ” 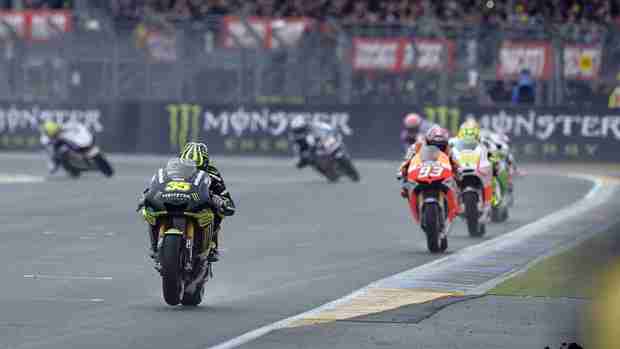