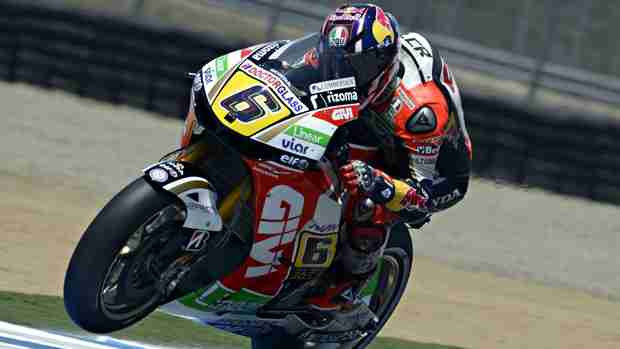 LCR Honda’s Stefan Bradl claimed his first ever MotoGP pole position as the German star posted a time of 1’21.176 to lead an all-Honda front row at tomorrow’s United States Grand Prix at Laguna Seca. Bradl set his pole-winning time on his penultimate lap in QP2 to relegate Repsol Honda’s Marc Marquez to second place by just 0.017 seconds. Rounding out the front row was GO&FUN Honda Gresini’s Alvaro Bautista who achieved his best qualifying result this season by setting a time of 1’21.373 to qualify in third place. The highest placed CRT qualifier at Laguna Seca was Aleix Espargaro whose best qualification time was just 0.923 seconds off Bradl’s benchmark effort and sees the Power Electronics Aspar rider line up on the grid in eleventh position for the race.

Weather conditions at Laguna Seca were similar to yesterday, with morning fog and cool temperatures during FP3 before sunshine and warmer temperatures broke through in the afternoon for FP4 and qualifying. Laguna Seca requires good acceleration out of the slower corners and good front-end stability to tame the changes in direction and elevation, hence the predominant tyre combination during qualifying was the softer option rear slick paired with the harder front slick. This same combination will feature heavily in tomorrow’s race, although some CRT riders evaluate their harder option rear slick and may select this for the race if high track temperatures occur.

“It’s an unbelievable sensation! My first pole position in the premier class at this spectacular circuit, and I am now the first German rider to do this in MotoGP history. I could not ask for more! We knew that we had a good pace all weekend, but this result is yet another step forward for me and the LCR Honda Team. I am really happy with the bike set-up just like in Germany, and I want to thank my team for the job they have done. We didn’t actually make any specific changes to the bike; we just adjusted some small things ahead of qualifying and my pace was immediately fast. We had a small problem when I had to come into the garage to change the tyre because we had lost half a second, but once I was back out again the track was clear in front of me and I could go for my perfect lap!”

“We did some more work this morning on our race pace and I felt really confident on the bike. This afternoon we finally got the front row position that we have missed out on in recent races. Qualifying has been our weak point but I was on the pace from the start today and everything felt good. It means we have the opportunity to make a good start tomorrow and not lose time trying to pass riders over the early laps. I am happy, confident and thankful to the team for all the work they are putting in. Hopefully we can have a lot of tun tomorrow.”

“I am happy, because despite the crash we are going to be starting from second on the grid for my first US Grand Prix. Obviously we would have liked to have taken pole, but I made a mistake at Turn 6 when I went in too fast. I lost the front end and couldn’t prevent the crash. I think that we’ve done a good job so far and have a strong pace, so we are confident that tomorrow we will be able to cap things off with a good race.”

“I’m quite happy about my position on the grid because I did quite a good lap. Unfortunately I lost the first row but I’m fourth and not so far. We worked a lot on the bike, especially after some laps when the tyre starts to slide. We made some improvements but it’s not enough. I’m quite worried as we have to find a way tomorrow to be a bit stronger and a bit faster, especially after some laps. We have to work to improve, so we have something to do, but starting in the top four is good as starting in the front is important here.”

“Today has been a tough day, so still to be on the second row of the grid is not too bad considering what has happened. I crashed on my first lap out of the pits in FP4 and we need to check the front tyre because I wasn’t even pushing. It was strange but we will sit down and analyse the data with Bridgestone to identify what happened. Unfortunately the bike couldn’t be repaired in time and we had a small technical problem with the second bike at the start of QP2. We are still checking to see what happened but it meant I only really got one flying lap in. I am fifth and very close to the front row but it is still my worst qualifying result of the season and it is a bit disappointing. But I am optimistic for the race. The times are incredibly close and as always the goal will be to fight for the podium.”

“I felt better physically in qualifying than in the last free practice so I pushed a lot and made some good laps. Maybe I could do one or two tenths faster with a perfect lap and be in the first row but the position is ok. When I saw my lap times I hoped to stay third or fourth but the other riders improved their lap times from the free practice. They are so close, if I could improve one tenth I could be on the front row and with two tenths I could be in pole position. The important thing is I didn’t crash and maybe tomorrow will be even better. It’s a very hard track, almost all the braking zones are not completely straight so I struggle on the shoulder. It’s a very long race with 32 laps so maybe with some painkillers I can be better than at Assen.”

“Today went a little better than yesterday. We were able to ride a little faster and I was able to make the cut for Q2. Getting seventh on the grid is very good and I’m happy with the placing, but the most important thing is that we had a good practice session and are in the mix to be able to have a good race tomorrow.”

“I am very happy with the improvement in my lap times all weekend. To do a 1.22.0 was a great step and I have to say a big thanks to my Monster Yamaha Tech3 crew because they did a brilliant job in improving the bike. I felt we had been going round in circles with the set-up a little bit but the bike felt great in QP2 and we really made a big step. This is not an easy track and tomorrow’s race is going to be really tough over 32-laps. It is always crucial to get a good start but tomorrow it will be essential because I believe I can learn a lot in the race. If I can find another couple of tenths from myself then I can stay in a fight and gain a lot of experience and that’s what I need more than anything. I am happy with my race pace and I am looking forward to the race.”