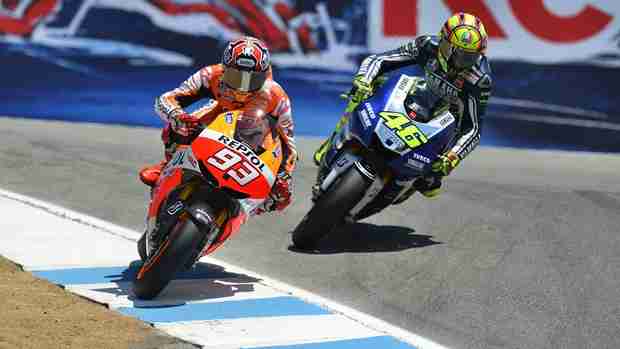 Starting second on the grid, Marquez had to fight his way past the two riders he ended up sharing the podium with – LCR Honda’s Stefan Bradl and Yamaha Factory Racing’s Valentino Rossi — to take the race lead on lap nineteen and power away to win the race by 2.298 seconds. Bradl took second place for this first ever MotoGPâ„¢ podium, while Rossi’s third place was his third successive podium. Avintia Blusens rider Hector Barbera scored his best result of the season, his tenth place making him the highest-placed CRT rider this weekend.

“I am very happy, because we weren’t expecting this result from our first visit to Laguna Seca. I didn’t think I would adapt so easily to such a tricky circuit, but from the first day of practice I felt very comfortable and quickly found the best lines. Today I was a little cautious at the start, because with a full tank it is easy to make a mistake, but when the tyres got up to temperature I was able to maintain the pace from practice. I overtook Valentino in a similar spot to where he passed Casey in 2008, although the passes were a little different because his was more spectacular! Later I was able to pass Stefan after studying him for a number of laps, and then I tried to build a gap in order to win the race by a comfortable margin.”

“It’s a great result for us. We did a good job all across the weekend. Of course expectations were high after I had pole yesterday, but I knew I had good speed and that I could be fast from the beginning. I tried to push from the start and I think I did that very well. I struggled a little bit. I thought the race speed would be a little quicker but, with the full tank of fuel, I had a few problems with the front. When Marc caught me I saw that he had some more edge grip on the tyre and that he was able to open up a gap. I just tried to manage the gap to Valentino (Rossi), which was not easy, and it was a long and tough race. Sure I want to thank Lucio, the whole Team and all the fans and I am happy to have my dad here with me to celebrate this important result together!”

“At this track with the Yamahas we suffer a little more than the Hondas, but we worked very well in the practice, we tried everything and I could keep a good pace in the race until the end, not far from Bradl. I fought with Bautista but always stayed in front so I could take the third podium in a row. I am quite competitive and I am happy, it is a good result. Now we take some rest, we go on holiday and we try to take some rest for the second half of the season. Regarding the pass, I tried to resist but today wasn’t the right day, Marc was too strong for me. Before the end of the season we will have another battle where I will be faster and I will give back the overtake for sure!”

“I was so close to the podium! I would really liked to have been up there but we have to be happy with this result and especially for the way we achieved it. Obviously you can’t get much closer than 0.059 seconds but the most important thing about today was that we showed we have taken a massive step forward and hopefully we can continue in the same way at the next race. This result gives us confidence after a less than positive period and it’s a nice boost for the rest of the season. I am also happy for the team, who have been working so hard and really deserved to celebrate a result like this today.”

“First of all, I want to thank everyone who has supported me over these past few days. This was a race in which it was very important to take points. I was seriously considering sitting out this race, because the conditions were very difficult, so I am very happy to have taken fifth. We were close to the podium, but on the final laps I found things very hard. I think that I held up well in the race, although I was in a lot of pain the entire weekend. At least I was able to grip the handlebars and control the bike. A lot of times moving the bike makes it tough for you and it is difficult to ride a long race. In the end, the 11 points are very important for the championship”

“This was a difficult race because I am not in shape, one month or more without training and two general anaesthetics. I felt quite dizzy from the middle of the race to the end so my performance was getting worse. The bike was also not working the same as in warm up. Maybe with more temperature the tyres were working differently and I couldn’t stop the same in the braking zones so I didn’t have the same feeling and I was half a second slower. The important thing is that we saved a very dangerous situation because if I crashed again I might have finished my championship. We have one month to rest and train now to get back in shape which will be important for Indianapolis. I hope to be in almost perfect condition there and have the same performance as before the crash.”

“That was a difficult end to a very difficult weekend and in all honesty I never got comfortable with the bike at any stage here. It is my worst result of the season so far and I can’t be happy because I gave up some valuable points in the Championship. Maybe last year in the same situation I would have pushed and not finished, so that is one positive we can take from what was a tough weekend and it certainly isn’t how I wanted to go into the summer break. Right from the start of the race I was on the limit and couldn’t go any faster. I got beat fair and square and the three on the podium definitely deserved it. I tried my best and didn’t give up but sometimes you have to accept you can’t do any better. It has been a pretty hectic month so now I am looking forward to getting some rest and I will be back even more motivated in Indianapolis.”

“It hasn’t been an easy weekend for us. Of course we hoped for more, but we know our potential is limited at the moment. I’m not happy with my start, and then I lost the rear brakes after about the fourth lap, maybe because they were overheating. I had no brakes for about two laps, but then I was able to pump them back up and close back on Dovi. I raced with him until I passed him on the front straight away. When we touched, I never saw him; I just felt something hook my handlebar. It was an extremely close moment, and when I went into turn two, my folding clutch lever had pivoted up and my handlebar was tweaked. I couldn’t use the lever to back-shift and went through the turn in fourth gear, and then it took me a little bit to get used to the new position. Thankfully, I was able to pull him back and pass him. We’re not going to celebrate eighth place, but our competitors are stronger than us at the moment, especially on a bumpy track like this. Hopefully we can do something better after the summer break. I’d also like to add that it was sad to wake up to the news of Andrea Antonelli. Even though I didn’t know him, the loss of a fellow rider is a terrible tragedy.”

“As we expected, it was a tough race, as it was difficult to control the bike and to be precise. We had hoped to do the whole race under a 1:23 pace, but it wasn’t possible. Unfortunately, I lost my position to Nicky near the end, but I did my best. I tried to set the rhythm ahead of Nicky to wear him down, but in the end it was him who wore me down! The contact on the front straight absolutely wasn’t intentional. Our bike tends to wheelie on the straight away, and as a result, it’s not easy to control, which is why we came together. It was a somewhat dangerous situation, but these things can happen, though obviously unintentionally. Unfortunately, this morning we all got the tragic news of Andrea Antonelli’s incident in the Moscow Supersport race, and I’m thinking of his family and team. I didn’t know him well, but we’re the same age and we did some motocross races together for charity. It’s truly tragic, and I’m very sorry.”

“I am happy because today went better than recent races. I set a fast pace in the first half of the race and I was fighting for a podium position but after not being able to train recently because of my foot injury I started to really struggle from a physical perspective later in the race. We have taken steps forward here though and that will help us in the coming races.”

“It is a shame that my race was ended by a technical problem today because my bike has been faultless all year. This can happen at any stage but unfortunately it happened in the race and now we will carry out a thorough investigation to find out what happened. Sometimes these things can happen and it was a shame because I was looking at finishing inside the top eight and that would have been a positive result. The race was going well and I was confident after being very strong in the warm-up because we made a good step with the bike. But then I had the problem and I have to accept that this is part of racing. The first half of the season has been very enjoyable and I have learned so much. I am feeling I am making big progress and now the summer break gives me the opportunity to rest my recovering left wrist and I can focus on coming back much stronger physically in Indianapolis.”