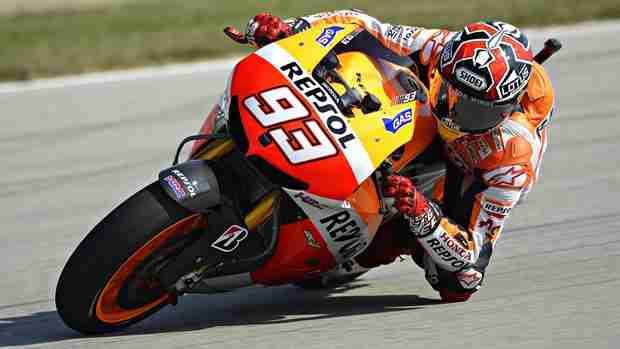 The leader of all four Free Practice sessions, Marc Marquez capped off a perfect two days with pole position at Indianapolis. The Repsol Honda rider took his fourth pole of the year, breaking the circuit record and leading the way by over half a second from Jorge Lorenzo and Dani Pedrosa —who will join him on the front row. In the third and fourth practice sessions, Marquez was the only rider to go round in under 1’39s. Pedrosa was fifth in the day’s two practice runs. However, in qualifying Marquez turned things up a notch.

The reigning world champion was on typical form for the 15 minute qualifying heat, ensuring he was the first man on track as the session began. Wasting no time, the first flying lap saw him smash the all-time record for the circuit with an impressive 1’38.648 second lap. Valentino Rossi endured a frustrating qualifying this afternoon, unable to find a set up with his YZR-M1 to challenge with the frontrunners. Rossi initially managed a 1’40.315 second lap to take ninth on his first outing before returning to the pits for fresh rubber. His second outing on track saw him improve considerably, taking a second off his time to lap in 1’39.356 seconds. Despite the improvement the time was not enough to move up the grid so the nine time champion will start from ninth on the third row of the grid tomorrow.

“I’m happy with how things went in the qualifying session. Obviously taking pole is important, but it’s tomorrow that really counts. Besides that, the conditions change a lot, tyre durability suffers and it will be tough as the race progresses. We knew the qualifying session was all about the single flying lap, the tyres had a lot of grip then and I took advantage of it. I set a very good time and I think for tomorrow we are ready to fight for victory. As always, we will give one hundred percent.”

“I’m happy with the pace, it’s not bad. We still don’t know how well our rivals are prepared for the race but I think I have a constant pace to finish the race with a good speed. The bike has improved by some small details every session so I’m happy with that also. I’m happy to be back on the first row and confident we can fight for the podium. You can see that Marc, Dani and Stefan are really strong, normally we are with them but it’s clear that this track is not so suitable for our bike, but it’s much better than it was in 2011. I am confident that we can fight to be not far from first position or maybe to fight for first.”

“Today went well, we were able to improve our times, so I’m happy! Starting from the first row is good for us and the feeling with the bike is more positive, but we still have to choose the rear tyre. The important thing for tomorrow is to start well and have a good race.”

“I’m disappointed because in the practice we weren’t fantastic but better than we were this afternoon. Unfortunately in the fifteen minutes of the qualifying practice the other guys were able to improve more. Especially they are able to improve in braking and corner entry. Jorge did a fantastic job! I tried but when I put on the soft tyre I have more problems with the front and I cannot push a lot. I just managed to improve my time a bit from the used tyre when we had done already fifteen laps. Anyway, we have to look forward and try to improve tomorrow. My pace is nothing fantastic but it’s better than 9th position so I have to try to recover some positions and make a good race.”

“I am a little bit disappointed not to be on front row because I’ve been inside the top three for most of the weekend. The positive point though is I am much stronger than in the past here at Indianapolis and I am looking forward to the race. I’ve returned from the summer break and picked up where I left off in the first half of the Championship and a podium is not out of the question tomorrow. Congratulations to Marc though because he has been in awesome form all weekend and he produced another incredible lap in qualifying. Hopefully we can put up a fight against him but we still have to work more on the set-up and at the moment I haven’t decided which tyre I will race.”

“Unfortunately we are only 8th in the qualifying because we have struggled a bit with the front tyre due to the increased temperature of the asphalt. I tried to push as hard as I could in my flying lap and I crashed. We were not capable to solve this issue with the front before the Q2 but we have been very fast for the whole weekend so I am not worried about my pace for tomorrow. It won’t be an easy race starting from the 8th spot on the grid but my confidence is still high”.

“I am happy with the work we have done today and with my feeling on the bike compared to yesterday. It felt better from the start this morning and gave us time to test the hard tyre again but there was no advantage to it so we went back to the soft. I managed to put a good lap together this afternoon to qualify fifth fastest, which is a decent position for the race tomorrow. We have improved our pace by a second from last year so that shows what a good job we are doing this season. We are improving from race to race and building our confidence with the bike. Tomorrow I hope we can get a good start and put our pace together, have some fun and hopefully take some important points home.”

“I am happy because I’ve improved my feeling with the bike and made up some positions. I really didn’t think we had this in us but hopefully we can take another step forward tomorrow. I feel confident that we can and I am looking forward to getting out on track. It won’t be an easy race but I’ll do my best.”

“I am happy to be on the third row because we made a really good improvement with the bike today. I did my best lap on my own and then I tried to follow Cal to improve a bit more but I made a small mistake. We’ve done a great job improving my feeling with a full fuel tank and this gives me a lot of confidence for the race, particularly in the first eight laps. I will be looking to make a good start and seeing what I can learn from those guys in front of me. Being precise and consistent is also going to be crucial at this track. It is easy to run off and if you do get off line it is very dirty, so making the least number of mistakes as possible will be crucial.”

“This morning was a really positive session because I improved quite a bit compared to yesterday. My shoulder hurt a bit more, maybe because of the exertion I put it through yesterday. Before I went on track, I decided along with the Mobile Clinic to take a painkiller to help me during the session. Still, it hurts in the changes of direction. Anyway, I liked the changes we did to the bike, and I rode better, so all in all, I’m not so bad. I’m sorry to have barely lost out on going straight to Q2, but we’ll get ready for Q1 and the race. We have to improve our pace.”