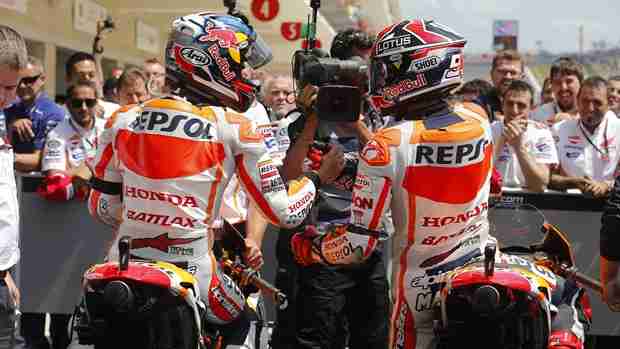 What a race weekend it was! While we work on the full race report we will first indulge you with the results and post race rider quotes, after what seemed like a day at the gym and the cross country marathon together at COTA, Austin.

“After taking my first podium in Qatar I was very happy, but I am even more so today after my first win! It went better than I expected and I am very grateful to the team for their efforts over the preseason; we have worked very hard and, without this, the victory would not have been possible. The race was very intense and physical, as I followed Dani for many laps and then decided to launch an attack and try to open a gap with ten laps to go. I could not pull the gap I wanted as some problems with the front emerged that we’d experienced throughout the weekend. Despite all this, we were able to take the victory.

The 25 points are important, but what is more important is to have achieved a win in my second race in MotoGP. We realise that more difficult circuits lie ahead for us, but we will try to give 100% at all of them. Our battle is not the one for the Championship, but rather taking it race-by-race and enjoying every moment.”

“Today’s race was good and I’m happy with this second place. We had great pace, even though we knew that Marc was very strong. I tried to ride my own race and in the end I was losing a lot of time on the chicanes. I was tiring physically and I could not handle the bike well especially in the first part of the circuit. In the second section of the track I was recovering quite a lot of time, but it was not enough. Furthermore, in one of the three laps before the end I made a mistake, lost around 1.5 seconds and Marc was able to get away. That was the point at which the race was lost for me. Still, I’m happy, my riding was pretty good today and I have improved compared with Qatar. I have to congratulate Marc as well, because he did a great job! Now we need to focus on Jerez a circuit I like a lot.”

“Yesterday we were so far from Marc and Dani but this morning in the warm up we found something. The hairpin corners we normally take in first gear we made in second so it improved a lot the feeling and the acceleration, but it was not enough. Just a little bit more, maybe two tenths quicker and I could have fought with Dani and Marc. Today third position was the best we could do. I want to congratulate Cal who didn’t give up until the end and also Marc, he’s the youngest rider in history to win a Grand Prix; he is a phenomenon. It’s an important day for me; I never thought to get this unbelievable number of podiums so today is a magic day. Time flies very quickly, it seems like it was just yesterday that I got my first victory, which was my first podium in Brazil in 2003 ten years ago and now today my 100th.”

“ I’m very pleased and we did a better job than any of us expected before we arrived in Texas. With no testing here I was worried that it would be more of a struggle and the fire in the garage on Wednesday meant we couldn’t do any of our normal preparation work. So to finish fourth and be behind Marquez, Pedrosa and Lorenzo is a great achievement for all of us and I want to say a massive thanks to my crew. We qualified well and I rode very well in the race and the most pleasing aspect was my consistency. Unfortunately I ran wide while trying to pass Bradl but I managed to fight my way back through and I was running the same speed as Lorenzo for a long time and that gives me a lot of confidence to take into the next few races. I’m giving it my all and I’ll never give up and I think this weekend again we showed how competitive the Monster Yamaha Tech 3 package is. Now we go to Jerez and I was quickest at the winter test a few weeks ago, so it is going to be another big battle that I’m excited about.”

“We can be happy today because we have done a good job. I took a very good start but I was not so aggressive as some other riders at the beginning because, on full fuel, I could feel some sliding in the front so I decided to remain calm and focused. With 13 laps to go Crutchlow passed me as he was quite fast in the middle of the race, especially in corner entry. We could not match his performance in the entry of the curves but we had a good speed in the exit. I think we have done our best and fifth place is the result we were expecting here at COTA.”

“This is a difficult track for us. We expected to do better, but I had a lot of problems in the race because I had a problem with the brakes. I had a vibration in braking because I lost one part of a disc so this didn’t help. We knew that we had to defend here; we know that when we cannot attack we need to try and arrive in the top five but today it was sixth. The balance of the first two races is positive and we arrive in Jerez optimistic for the next few races as the tracks are better for us.”

“Obviously, we’re not satisfied with seventh place, but the race time wasn’t bad. I was able to keep a good pace below 2:06, so I’m pleased with my aggression and effort. I managed to be pretty consistent up until the final five or six laps. The last three laps with Bautista were fun–a nice battle! We know we have to work hard, because this is our limit at the moment, but we’re really motivated to improve.”

“I was expecting a better race after the feeling I had with the bike yesterday in qualifying and honestly thought I could even improve my pace today but the bike was moving around and I didn’t have the same confidence. I tried to stay with the group but couldn’t manage it. In the end after pulling back two seconds on Dovizioso I got into a nice battle with him but in the last corner I made a mistake and he passed me. It’s a shame but we have chance to make up for it in a couple of weeks in my home Grand Prix at Jerez, a place and circuit that I really like.”

“It was a tough weekend. The track was great, but I lost some time in the beginning and was struggling with change of direction. I was okay on much of the track, but I never found the confidence in the front end to flick the bike into the corners, which hurt me in the esses. The guys did a good job getting me a better bike for the race, and I don’t really have any excuses. Ninth place isn’t what we wanted here today, so I certainly hope we can sort a few things out and start putting up a better fight than we have in these first two races.”