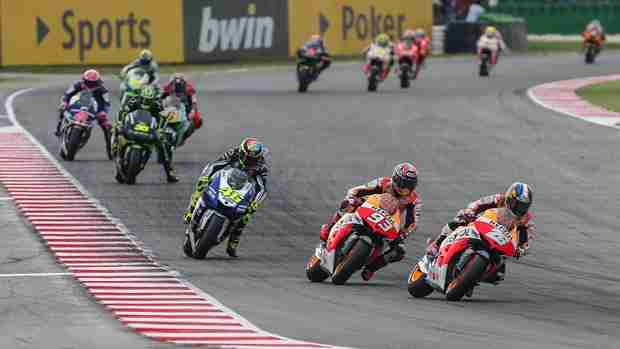 Round fourteen of the 2013 MotoGP season takes place at Motorland Aragon; a venue where changeable weather conditions and the varied nature of the circuit creates a challenging scenario for tyre development. At approximately five kilometres in length, Aragon is a technical circuit with a back straight almost one kilometre long among a mixture of long sweeping corners and slower, tighter curves. The varied nature of the circuit and its susceptibility to changeable weather requires a special approach to front tyre selection. The two front slick compounds, the soft and hard compounds are offered to ensure a broad operating range to deal with whatever weather and track condition occur this weekend.

Last year Bridgestone supplied asymmetric rear slicks for the first time at Aragon and following a successful dÃ©but, rear slicks with harder rubber on the left shoulder will once again be supplied this weekend. The CRT entries will have access to the soft and medium option rear slicks, while the more powerful works bikes will be able to select from the medium and hard rear slicks. Owing to the smooth tarmac and possibility for cold weather, the main wet tyre for Aragon is the soft compound option.

“I’ve always done well in Aragon and I’m looking forward to racing in front of our home crowd again, the support is always great and gives you motivation! We had a test on Monday after Misano and found some positive things that I hope will help us here in Motorland, especially in corner exit. We’ll have to wait and see.”

“It will be nice to return home to race in front of our home fans in Aragon this weekend! The track —which is one of my favourites, has technical first and final sections, and you need to be strong in cornering. We’ve had good results there in the past two years so I hope to continue this way and we’ve also been testing there already this year on the MotoGP machine, so we have some data. After the race in Misano, we had a good test on the Monday and definitely found some positive settings, so I’m looking forward to trying them out this weekend in Aragon!”

“I don’t know if AragÃ³n will suit us better than Misano. For me this year it’s always new and at every track the Ducati works in a different way. I don’t know what we can expect but normally AragÃ³n is quite a good race for Ducati. I really didn’t know that I will reach the milestone of 200 GPs at AragÃ³n! It’s really nice to do a lot of races in the world championship, and it’s something really important for the rider. When I was young, for me it was impossible to think about being a part of the world championship, so I’m really happy to have reached this milestone but it also means that I’m becoming quite old!”

“AragÃ³n is definitely quite a bit different from Misano, the last track we raced at, as it goes left and has some elevation changes. It’s a fun track that has some nice corners, although it has gotten pretty bumpy since the first year we went there and had great results with the Ducati, which hasn’t helped us. It’s a track I enjoy, but we know that it’s not going to be an easy race for us. Still, I’m looking forward to going there. We’ll try to start the weekend strong and see if we can do something better than we have at the last few races.”

“I am still feeling frustrated about the race at Misano because I didn’t have the opportunity to compete as I would’ve liked. It would’ve been nice to give the team and sponsors a good result to celebrate but I felt powerless to ride faster and we still don’t know what really happened because I couldn’t ride comfortably. We didn’t make any changes to the setting compared to practice but the feeling wasn’t the same and I was unable to fight for a better result. We kept the same setting for the test on Monday and I was able to ride almost a second faster, which shows that on Sunday there was something strange happened. Anyway at Aragon we will use the new material from Showa and Nissin that we tested on Monday at Misano and which gave us some positive feedback. Last year we had a lot of problems at this circuit but this year we arrive with a more competitive bike so I am sure that we can be fast like we have been in the last races. Obviously we need to work hard from the first session on Friday. The track is unusual with some fast sections and some slow sections, it has a long straight and some long and demanding direction changes. It isn’t easy to find the right compromise with the engine and the setting but one good thing about Aragon is that you can make overtakes at various points on the circuit.”

“Misano should have ended up with a good result for me but instead it finished with a retirement. I am still pretty disappointed about that but I certainly haven’t lost any of my determination to finish my first season in MotoGP in the best possible way. Aragon is an opportunity to make up for the result at Misano and I will certainly be giving it my best shot.”