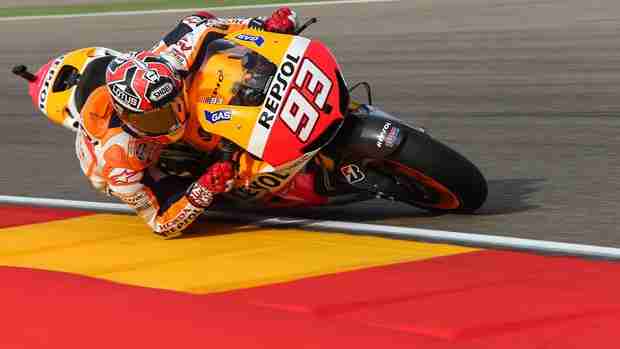 Marc Marquez took control in the opening day of practice at the Aragon Grand Prix, the Repsol Honda rookie setting a best lap time of 1’48.987 in Free Practice Two as the Spaniard vies for his sixth victory of the season. Marquez’s benchmark lap was within half a second of the Circuit Best Lap record and placed the current championship leader at the front of a trio of Honda riders at the top of the timesheets. LCR Honda’s Stefan Bradl was second quickest today, his best time of 1’49.119 barely one-tenth behind Marquez, while on the other Repsol Honda RC213V, Dani Pedrosa was third overall and 0.267 seconds off the pace of his teammate. Aleix Espargaro continued his domination of the CRT class as he rode his Power Electronics Aspar ART machine to ninth overall with a personal best lap time just 1.068 seconds off the lead.

Weather conditions for both of today’s sessions were fine and warm, with a peak track temperature of 42°C recorded in FP2. As is typical for the first session of the race weekend, in Free Practice 1 all riders headed out on softer slick options front and rear to evaluate the track conditions. As track conditions improved and temperatures increased in the afternoon, most riders migrated to the hard compound front tyre, while some riders also took the opportunity to evaluate the harder rear slick options. Rider feedback from today shows that the preferred tyre combination is the harder front paired with the softer rear slick which offers the best drive out of the corners with good braking and cornering stability.

“I’m happy, because today I felt comfortable on track, we put in some good laps and improved our feeling a lot. We were only lacking a test run with the hard rear tyre, so tomorrow we will work on that to see which compound we go with in the end. We hope to get a bit further along with our preparations for the race.”

“Today, I didn’t feel as good as I did in the test that we did here after the Barcelona GP, as there was less grip in these two practice sessions. Anyway, it’s the same for everyone. In general the feeling that we have is pretty good and I worked on various things with the bike today. However, we can still improve our setup. We hope to take that step forward tomorrow and we shall see if the grip level improves, as that would make things so much easier for everyone.

“It was a good first day for us because we achieved a good position and we are very close to the top guys. Secondly I am very happy with the bike right now: we have a kind of combination of settings which includes also Aragon test set up and Misano set up. We have a good feedback from both rear and front tyres and I can push to the limit so I am satisfied about our pace so far. Let’s see what is going to happen tomorrow but I am pretty optimistic”.

“We struggled more than we expected. In the test the track had different conditions and more grip, the temperature was lower and it was better. Today we suffered quite a lot, especially this afternoon I had quite a lot of issues, especially one with the brakes and I lost nearly half the practice. At the end I used the second bike and made some laps to find the rhythm. We have to improve and go faster but at this moment after some laps the rear tyre starts to slide a lot and the bike becomes difficult to control.”

“Today was a really good day because we have come to a track where we struggled last year and also in the test here after the Barcelona race and set a good pace in both sessions. Obviously the bike is quite different and with the suspension and brake updates we tried at Misano it is a more competitive package. It was a shame about the crash in the last few minutes because I might have improved my lap time but it doesn’t matter. I am satisfied with our day’s work and confident of a good result this weekend.”

“I had a good feeling with the bike today despite the fact that I had to learn the track because the layout is different to the one we used in SBK. Overall I am happy and I think we can have a good race here.”

“Today was a pretty positive start to the weekend and I am happy to be in the top six. This morning proved it wasn’t going to be easy because I was seventh and the top six had all tested here back in June, so they have an advantage in terms of set-up and information. I feel I am riding quite well but for tomorrow we definitely need to try and get some more speed out of the bike. I am quite slow compared to the rest in the speed traps and also quite a way off the fastest Yamaha, so that is one area we need to look at tonight and work on improving for the rest of the weekend.”

“I’m reasonably happy with how the weekend has started but obviously the final position doesn’t look so good. I don’t think the position truly reflects our potential because a few guys not so far in front of me used a soft tyre to make their best time and they could only make one fast lap. I feel my pace is consistent but I am certainly looking to improve by at least 0.5s tomorrow. Track conditions between FP1 and FP2 changed quite a lot, so it is not clear which direction to go with on the set-up. But the first goal for tomorrow will be to make sure I am back in the top 10 at the end of FP3 to advance straight into QP2.”

“We wanted to try the hard tyre, but as there’s a one-second difference, it’s not worth considering at the moment. Tomorrow morning we’ll continue working because although the time isn’t bad, it’s still a second off the leaders. The others used the soft tyre the whole session, whereas I only put it on at the end and only had one good lap with it. I think the gap here at AragÃ³n is in line with the other tracks.”

“In the morning, we weren’t quite as far back as we’ve been at other tracks, which is good considering that we didn’t test here when the other manufacturers did. Since then, we haven’t made a lot of progress, as I’m not very comfortable on corner entry. I can’t get enough feel from the front to really find my limit, and I ran wide a couple of times, including once this afternoon on a good lap. That’s where our main focus is, so we’ll concentrate on that tonight and see what we can do tomorrow.”