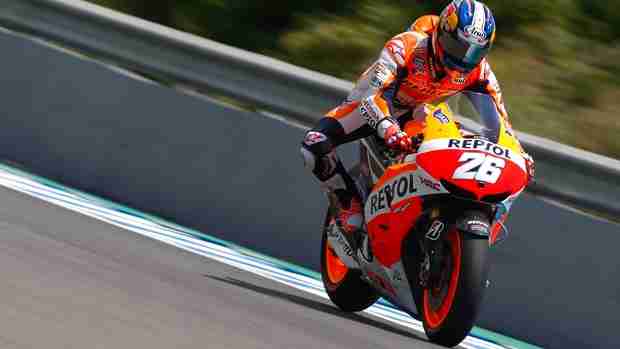 “The session went well, but at the end I had a crash in turn eight, as I maybe pushed a little too hard and lost the front. We’ve ridden well all weekend and the bike is working great, so we are hoping that tomorrow we can continue in the same way. Pace is the most important thing and I hope to get a good start and have a strong race.”

“I’m happy with this pole position, it’s a good present for my birthday! I knew the track was not perfect, it’s very warm and there were a lot of crashes in Moto2 and the previous qualifying. I just tried to make the perfect lap, unfortunately I couldn’t  I made a mistake in two braking zones and went wide and lost some tenths. Anyway, in the other corners I was really quick and at the limit so it was enough to make it. It’s going to be tough tomorrow, normally the lap time you make for qualifying you can’t repeat in another time because the tyre drops. We hope to improve the bike a little bit to get more comfortable with pace. Anyway I think we can fight for the win or at least for the podium tomorrow.”

“I’m pretty happy, because the session went better than I expected. We knew it would be a tough and difficult weekend, but I think we had a very good qualifying session and starting from the front row is very important. I know that Dani and Lorenzo are one step ahead at the moment, but I will still try to give one-hundred percent and ride my own race. It will be hard, hot, and very demanding on the tyres, but we will try to get a good result in front of the home fans.”

“It has been a very difficult day for obvious reasons. The two crashes were very big but the second one was particularly hard because it was very fast. The first crash the temperature was quite a lot different from the morning and I just got caught out and it was my own mistake. In the second crash some people felt there was something on the track but I don’t think that was the case to be honest. I made a mistake in the braking and rather than going straight the front brake level locked into my hand. But this was a really big crash and I’m proud that I got back to the garage and went back out to try and go faster. It seems in the warmer conditions it is quite difficult but I am not the only one feeling this. I’m looking forward to the race and we will make some changes with the bike to try and improve the front feeling in the hot conditions. It seems everybody is struggling and it is not like me to have two crashes in one day. I’m a bit battered and bruised but it won’t stop me from giving it 100% in tomorrow’s race.”

“Today the practices were not so bad. The position is the best qualifying for us this year. The second row is quite good; we can also do better. Unfortunately at the end I had a crash but I’m ok, I don’t have any problems so we are more or less ready for tomorrow. The bigger issue is how high the rhythm will be with the used tyre. Especially with the hot conditions the rear tyre slides a lot so it is important to see how high the rhythm is after seven or eight laps. Now we try to make the best setting and we will see tomorrow.”

“We used a similar setup to what we had here at the test, with a few modifications that we’ve made in the last two races. In the morning, I felt a little better than I had in the test, and my pace was okay. Then I suffered a lot on the warmer track this afternoon, especially with edge grip, which really affected the turning. The bike was pushing wide in the fast corners, which are so important. I’m also having a problem with my wrist; between Qatar and Austin, I developed some tendinitis and a lot of swelling in the joint. It was manageable in Austin, but it’s worse here, which makes this weekend even more challenging than it already was. Still, if we can improve the bike in a couple of the key corners, we can be much closer.”

“It was really difficult this afternoon, and I’m not completely sure why. The grip was much worse for all the Ducati riders, and it was much harder for me to be precise and stay on my lines. We must understand if we can improve that sensation through the setup, but this is the bike and I just have to adapt. I’m trying to stay calm and work in order to have a good session tomorrow morning.”