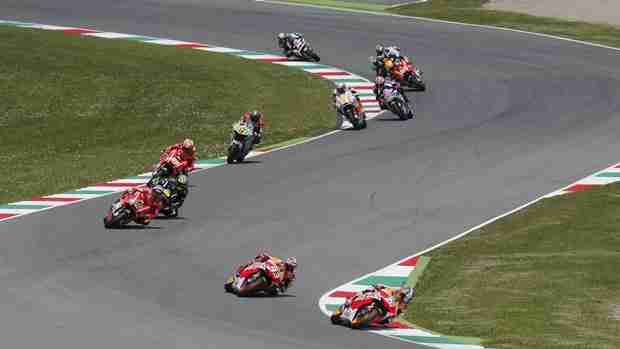 The World Championship completes the opening third of the season this weekend at the Grand Prix of Catalunya, round six of the 2013 campaign. The Grand Prix will be a special one for Dani Pedrosa, who rides just a few kilometres away from where he was born and raised. He comes into the event as the series leader, following a victory at the Italian GP. Repsol Honda teammate Marc Marquez will once again be riding at a track for the first time with a MotoGP machine, although he is very familiar with the circuit after racing there since childhood.

The circuit promises to deliver an exciting weekend of racing as the scene of one of the greatest battles between Lorenzo and his teammate Valentino Rossi in 2009 when the Yamaha riders took it to the wire over the last laps in a fight for glory, won at the last corner by Rossi. Fresh from his superb victory in Mugello, Lorenzo will be eager to repeat the performance in front of his home crowd and continue his unbroken four-year podium run at MontmelÃ³. The Mallorcan was second in 2009 and 2011 and claims two premier class victories there, 2010 and 2012. Lorenzo also has one 250cc win at the track in 2007.

Andrea Dovizioso has posted five podium finishes across three classes at the Catalan Grand Prix, including a 250cc victory in 2006. The Italian, who finished third in last year’s MotoGP race and will be riding the Desmosedici GP13 at the track for the first time, has recovered from the sore neck that he suffered in a crash at the Italian Grand Prix last week. Although Nicky Hayden’s sole podium result at the circuit was a runner-up finish in 2006, the same year he won the world championship, the American enjoys the track and is hopeful of a strong result this weekend. Following the race weekend, the Ducati Team will participate in a one-day official IRTA test at the same circuit, where they will continue development of the Desmosedici GP13.

For Alvaro Bautista it is an ideal opportunity to bounce back in front of his home crowd after crashing out of the Italian race following contact on the first lap with Valentino Rossi. It was a racing incident that neither rider could avoid but it was still a bitter pill to swallow for Alvaro, who was denied the chance to follow up some good work in practice at the Tuscan track with a positive result. However, his confidence in the RC213V machine is increasing every week and the work done by the Team GO&FUN Honda Gresini engineers alongside Showa is bearing fruit. Bautista’s goal is to demonstrate the potential of the package at MontmelÃ². Opened in 1991 and home to the Gran Premio de Catalunya since 1995, the circuit can boast one of the longest main straights in the world.

”I’m quite satisfied after our great result at Mugello that completed an almost perfect weekend. Winning again was very positive for me and for the team and now we go to MontmelÃ³, my home grand prix. Some parts of the track are quite suitable for us but the doubt is always if the track conditions and the temperature can benefit us. â€¨I am very optimistic for the race and we will keep on working on the bike in the same way that we did in Italy. Compared to Mugello, MontmelÃ³ is a little bit slower but at least there are no first gear corners and hopefully that will help us a lot. This is a good track for us and we have to profit from it and try to repeat the victory. It could be great for the Championship. As far as I’m concerned I will push 100% to achieve it.”

“For a few days after I had the crash at Mugello, I hurt everywhere! Fortunately I was able to start training immediately and I did not waste any time. The Barcelona race will be very important, especially after recent results. I want to get on the podium in Spain and I will do my best as usual. It will be important to start the weekend in the best way and make a good qualifying. It will be very important to start from the front.”

“Mugello was a tricky weekend but in the end to come away with second place and 20 Championship points is a good result. I’ve been able to rest a little since returning from Italy and now we head to my home Grand Prix in Catalunya, still leading the World Championship. This track is one of the circuits where you stay on the edge of the tyre longer and also a long time turning right so it’s important to have a good feeling with the tyres. In general it’s a nice track and with a very special atmosphere, all my family and friends come to support me and the fans are incredible. Hopefully the weather is good there and we can put on a good race for everyone at my 200th Grand Prix start!”

“After crashing out in Mugello I really can’t wait to get back on the bike at my home GP in Montmelo! I am more relaxed after seeing Dr. Mir last week and he confirmed there are no complications with my injuries and I am on my way to feeling 100% again. I really hope we have good weather in Barcelona so that once again, we can make the most out of all the free practice sessions. This is another track where all the other riders have much more experience than me and they will be extra tough to beat! But we will keep to our own programme and work hard and try our best.”

“Barcelona is one of the nicest tracks on the calendar, and it’s always fun to go to Spain for a race weekend. As for the Ducati, I’m not sure because I’ve never ridden the GP13 on this circuit, but it might not be the best track for us because of the fast corners where our bike tends to ‘pump’ a bit in the rear. Still, I’m keeping an open mind as we head to Barcelona. I’m always very excited to go there, and I’m optimistic following a good weekend at Mugello and a good test last week.”

“Barcelona hasn’t been a great weekend for me in recent years. I’ve struggled a bit there, especially with the long corners, which are very important. Still, we know Catalunya is a great track, and I really enjoy the area and the atmosphere. I certainly hope to do a better result there than I have the last couple of seasons. We’ll see what we can come up with, and we’ll keep pushing and moving forward.”

“The collision with Valentino at Mugello has left a really bitter taste. I really wanted to score a good result in Team GO&FUN Honda Gresini’s home race and I had a good feeling about it after working so well throughout the weekend. Unfortunately these things happen in racing and you have to de al with setbacks that you don’t expect. The important thing is that physically I am okay and this Sunday I will have the chance to finally put this disappointment behind me. I am very focused on this weekend’s racing at MontmelÃ², another home track for me where I will no doubt get a lot of support from the fans. It is a good circuit for me, I have always gone well there in the past and I remember last year I had a great feeling with the bike and only narrowly missed out on the podium. We have improved this year so I am convinced we can do an even better job. Me and the team are all highly motivated and on Sunday we want to run in the lead group. It is not an easy track because of the elevation changes and the long corners, where the bike slides around a lot. It will also be important to get the bike feeling stable under heavy braking so that we can overtake. MontmelÃ² is one of my favourite circuits, because of the layout and the fact it is so safe for the riders.”

“I struggled quite a lot at Mugello but since then I have been thinking hard about Catalunya. I have also been dealing with a bout of food poisoning but I am over it now and feeling fit. I am really excited to get out on track at MontmelÃ². I am really determined to get a good result here for all the guys in the team who are working so hard to help me. Without them the step up to MotoGP would have been even harder, if not impossible, so to give them a little something to smile about is t he least I can do in return.”