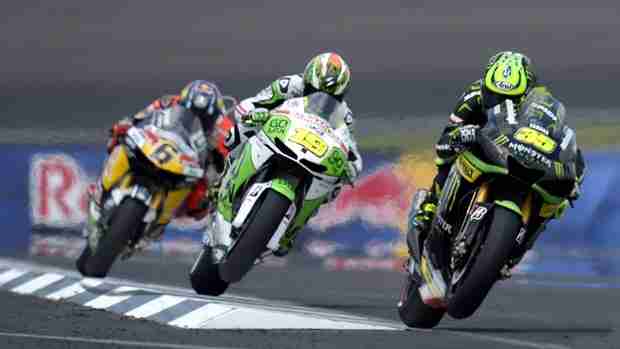 There’s no time for rest this week as the MotoGP paddock heads straight from Indianapolis in the USA to Brno in the Czech Republic for the second of three back-to-back races. The 2013 Czech Republic Grand Prix will be the 44th in Brno, the World Championship starting here in 1965 on the no longer used road circuit. Measuring 5.4 kilometres in length, Brno is one of the longer circuits on the MotoGP calendar and has numerous straight sections joined together by a series of technical corners including four left-right corner combinations. The circuit also features an elevation difference between the highest and lowest part of the circuit of over 70 metres which make braking into the downhill sections challenging, thus requiring the front tyre to provide excellent stability. A high grip levels from the rear tyre is also important to ensure good drive onto the straight parts of the circuit. Adding to the technical complexity of this circuit for tyres is the abrasive tarmac which demands superior durability.

There are eight right-hand and six left-hand corners at this circuit and though asymmetric rear slicks are provided, the loads imposed across the left, centre and right of the rear tyre are similar. The rear slick tyre options for CRT riders at Brno are the soft and medium compounds, while the works riders get the medium and hard compound options. Bridgestone originally planned to introduce a new hard compound rear tyre at the Czech Republic Grand Prix, but after recent testing at the Brno circuit has decided to change supply. Another hard tyre specification which has a softer compound on left side with current hard compound on the right side will be supplied this weekend and this change was made in agreement with the Grand Prix commission at Indianapolis. Front slick options for the Czech Grand Prix are the soft and hard compounds and the main wet tyre is the soft compound option.

Marc Marquez continues to rack up records. With a fourth win of his rookie season, at Indianapolis the Spaniard equalled Kenny Roberts’ 1978 achievement and has a further eight races in which to pass the American legend’s milestone. His team-mate, Dani Pedrosa, comes into round eleven of the season off the back of second place state side, despite not having fully recovered from a left collarbone injury. Both riders have fond memories of last year’s Czech Republic GP, in which they won the race in their respective categories. The Czech circuit is a favourite of Lorenzo’s, the reigning world champion having won there in the premier class in 2010, twice in the 250cc class in 2006 and 2007 and once in the 125cc class in 2004. Rossi’s record is even more impressive, the nine-time world champion can claim four premier class MotoGP wins in 2003, 2005, 2008 and 2009, one 500cc win in 2001, a 250cc win in 1999 and a 125cc win in 1996.

Each of the Ducati Team riders has posted a premier-class podium finish at the Czech Republic GP, Andrea Dovizioso earning a runner-up result in 2011, and his American teammate Nicky Hayden finishing third in 2007. The Italian has also earned three runner-up finishes in the 125 and 250cc divisions.

“At Indy we played our cards in the best way possible. I think on the Brno circuit we can improve a bit and also we expect a better performance because of the track and the asphalt. I believe my physical condition will also be even better. Probably there we will have more options to fight for the victory, but anyway this season you never know because the pace can change a lot from one track to another. It will be very important to see if we can win there to start to take some points from the Honda riders. I’m looking forward to the race and we are going to the Czech Republic with plenty of optimism.”

“I am very happy with the result at Indy because I knew that the race was going to be very difficult for us. We took important points, and now we go to Brno, a track that is very different from Indy. Brno is a track that I like a lot, where I made good races and won a lot. We also tested on this track a few weeks ago; this will help us to have a good base set-up. Marquez and Honda in general are going very strong, but we are defending well. Now we will try to do better in the next two races”.

“Indianapolis was physically a very tough race for me, so it’s important I can recover in time for Brno just few days from now! Let’s hope the weather stays nice as it can be very unpredictable in that area. Brno is a fast track, with high speed corners and in the past the Honda has done performed well there. Last year we had a strong race there and I hope we can repeat the same this year!”

“After a great weekend in Indianapolis, there is no rest and we go directly to the Czech Republic. Brno isn’t one of my favourite tracks but I won there last year so I still have a good feeling there! We will see when we get there, historically Yamaha have been very strong so I’m sure they will be very fast again this year, also considering they tested there a few weeks ago. We will wait to see our level and take the weekend at our own pace, work hard and try to take some more Championship points.”

“We go to Brno this week feeling happy after the great job we did at Indianapolis, when we fought for fourth position despite struggling for rear grip at the start of the race. It was a really positive weekend and now we go to Brno feeling confident that we can do another good job. We had a few problems last year but we have made notable progress since then so I think that we can be competitive again in the Czech Republic. We are working in a really good way at the moment and everything is coming more easily. Brno is more suited to the Yamaha because of the wide, fast corners and changes in direction and elevation but this year our bike has improved so much and I think we can keep this run of good results going.”

“Brno is a circuit that’s really nice and quite challenging. The track is very different from Indianapolis, and it will be interesting to see how my Ducati goes there. I like the up-and-down layout, and and I’m happy to go straight there for another race after Indianapolis. Still, although I’ve had some podiums there in the past, it’s not one of my favourite circuits.”

“I missed Brno last year with an injury, but it’s one of the best tracks in the championship. It’s very open and fast, and I like it a lot. We’re in a busy stretch coming off Indy, but it’s no secret that I like racing, so I enjoy back-to-back races. I expect a challenging weekend in the Czech Republic, but as always, we look forward to doing our best.”

“Unfortunately at Indianapolis all the positive things we did in practice came to nothing in the race. I didn’t have the same confidence with the bike and it was disappointing. Now we go to Brno, finally a circuit that I already know, and we have an opportunity to put that disappointment behind us. I like the circuit at Brno so hopefully that means we can get started on the bike set-up from the first session.”