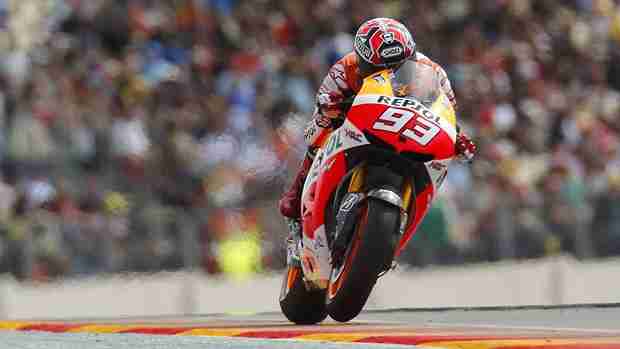 Repsol Honda’s Marc Marquez reigned supreme in a captivating qualifying session at Motorland Aragon in which the top six qualifiers posted times under the existing lap record. Marquez’s time of 1’47.804 smashed the old Circuit Best Lap record by six-tenths of a second and saw the rookie pip Yamaha Factory Racing’s Jorge Lorenzo to the top grid slot by a mere 0.010 seconds. The reigning MotoGP champion split the Repsol Honda’s on the front row, as Dani Pedrosa claimed third in qualifying with a best lap time of 1’47.957. Power Electronics Aspar’s Aleix Espargaro continued where he left off yesterday to qualify highest out of the CRT riders, his best time of 1’49.348 good enough for tenth place on tomorrow’s grid.

Overnight rain created damp track conditions for the Free Practice Three, limiting the number of riders who took to the track in the first session of the day. The track was completely dry for FP4, offering the teams an opportunity to work on a dry setup for the qualifying sessions and the race. A peak track temperature of 35°C was recorded today, 7°C lower than yesterday’s top reading. The combination of the soft rear and hard front slick was again the popular choice among the riders in FP4 and Qualifying, however some riders were able to utilise the greater edge grip of the soft compound front tyre to good effect. Rider feedback from today’s sessions suggests that the hard front slick will be the more widely used choice in a dry race tomorrow, though should weather conditions be cooler again, some riders may switch to the soft compound front slick.

“It was a very closely fought qualifying session. We were able to get maximum performance from the tyres, which was the key to this pole position. Small details decided things this afternoon. I am happy, because we were able to achieve our aim of a front row start and to have the pole is a bonus. Tomorrow it will be important to get a good start and keep calm in the early laps, with the intention of taking the race to Jorge [Lorenzo] and Dani [Pedrosa].”

“I knew I made a really good lap and I hoped to be in first position but I knew the other riders would be very close or in front of me. Finally for ten tenths of a second I lost it. I tried my best but I made a mistake in the first corner and lost one or two tenths so lost pole position. One thing is to make one fast lap, another is to make fast laps for the whole race. In the last practice before qualifying we found something extra for pace so we are stronger in one lap and also for the pace for the race. If the race remains in dry conditions it will be a good race.”

“Even though the position on the grid maybe doesn’t reflect it, today we had a good qualifying session. We did a good job today and a lap time that I’m pleased with, for tomorrow the key will be to have a good start as the first corner is very close to the start, so I want to have a strong first few laps and maintain a good pace for the whole race. The tyre wear will be crucial so it’s also important to manage them for the race distance.”

“I have a good feeling and I’ve improved my pace a lot and braking ability also. We have also improved the rear grip over long distance. I’m so happy because it was a great qualifying for me and I enjoyed it a lot. The level was very high and we were just one tenth from pole position, so we are all together. We have to see what the conditions are tomorrow; for sure today they helped us. With a few less degrees we are more competitive with the Yamaha. My pace is very similar to Jorge and Marquez and Pedrosa but we know that they are very fast so to try and stay with them I have to improve again tomorrow.”

“Obviously I wanted to catch the P4 but Rossi, at the end, was a bit faster but I am pretty satisfied anyway. We had a good start of the weekend and we continue with a good base set-up and consistent pace. This makes us quite optimistic for the race tomorrow but we have got a big question mark about the tyres: actually we have a good pace in the first laps but the tyres drop down quickly. The key element will be to save the tyres as much as possible till the end of the race. At this stage I am happy because the rider and the Team are working good and I like this combination”.

“We didn’t go out this morning because the track conditions after the rain were such that we couldn’t get any useful feedback from either the wet or dry tyres so it meant we had to do all our work in the afternoon. Final free practice didn’t go well so we went out in qualifying with the setting from yesterday and set a good time. The pace from the other guys was very fast though and we have had to settle for sixth place and a second row start tomorrow. I am still happy with the lap time and my feeling on the bike. It was important to qualify well here because the first turn is very tight and even though it won’t be easy I think we can be fighting for fourth or fifth place.”

“I can’t be happy to have missed out on a top six grid position for the first time this season. Qualifying just didn’t go according to plan and I feel we picked the wrong bike. We had a choice of two different settings and unfortunately we chose the wrong one. And on the three laps where I was really pushing for a time I didn’t nail any of them. I made a small mistake on each lap and that is the reason why I am only seventh on the grid, which is a bit disappointing because I was proud of the fact that I’d qualified in the top five in every race before this weekend. A good start is going to be crucial to try and go with the leading group but coming from seventh means I am expecting a very difficult race.”

“The last two races have been pretty dismal, so it is great for me to be able to turn it around this weekend. I said yesterday that I didn’t feel 13th was a true reflection of my potential and thankfully I was able to show that was the case today. The bike felt great and I have to say a massive thanks to my Monster Yamaha Tech 3 crew. We had a long meeting last night and there were a lot of positive things that came out of it. I was able to change my riding style like they suggested and I got more feeling from the bike and the lap time was a big step from yesterday. Eighth is the position where I expect to be given the competitiveness of the package I am on. Today I got the good feeling back with the bike that I had in Brno and now I am really excited for the race. Tyre life will be the key tomorrow but hopefully I can race in front of the bikes of Dovizioso and Hayden and not behind them.”

“Unfortunately, this is our position at the moment. We’re all going quite fast, but I’m satisfied with my qualifying time since I managed to improve by a second compared to the previous sessions. After following Bradl, I was able to drop some hundredths while riding by myself on the last lap, so I’m happy about that. Maybe we can battle with Smith in the race, although he’s a couple of tenths faster than I am. The riders ahead of him are quite far off.”

“At the end of the morning session, we went out on the damp track to get a feel for it, but it wasn’t very useful. We were able to improve something in the afternoon and were a lot faster than I went here last year, but everybody’s going a lot faster. Honestly, I’m quite disappointed to be so far back, but that’s the situation we’re in. We’re getting a lot of tyre wear because there are long corners where we’re on the edge of the tyre for a long time, but we have a couple of ideas for the morning that might help that. For the race, we need to get through turn one clean, see what happens with tyre wear and try and do our best.”