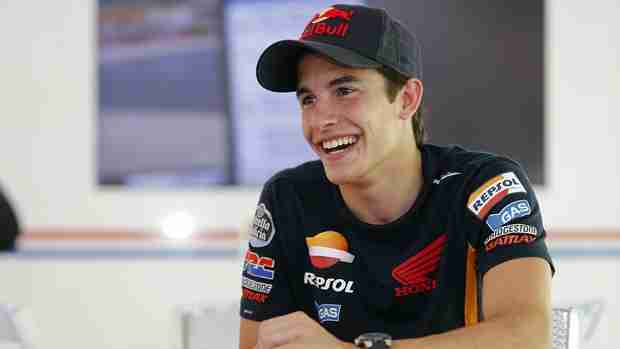 With three wins and a further five podiums in his rookie year in the premier class, the Repsol Honda team rider is enjoying a well-deserved rest at the halfway point of the season. Despite being new to the category and still in a learning stage with his Honda RC213V, Marquez has shown in the first nine races of the year that the sky is the limit for him.

“There are several, but Austin was special –the first victory for me. I also liked Laguna Seca. It was a new track for me, which I had not ever ridden at, it’s a special circuit. I also loved the Jerez race because I pushed 100%. There are several races in which I could have done better, some worse, but overall I’m happy, except for Mugello, which was a weekend with crashes and a fall in the race with just two laps remaining and I lost some valuable points.”

“After the Austin test I saw that there could be a good opportunity to get the first win, but you always have your doubts –because a test is not like a Grand Prix weekend. In the race things are completely different. When I won the race, at first it felt like just another victory. But when I got home, I felt that a win in MotoGP is not just any victory, it is something special and I was thrilled. I remembered all the people who had helped me achieve it.”

“No, but a lot depends on the circumstances. By winning, it means that we did something right. The Austin circuit suited me right from the start, but maybe if this Grand Prix had been held at the end of the championship, the victory would have come at the end of the season you never know. It was a new track for everyone and it helped me a lot to have done the test there.”

When I jumped from 125cc to Moto2 I suffered even a little more than what I have when moving up to MotoGP.”

“The truth is that I cannot compare 250cc with Moto2, because I never raced in 250cc. But maybe when I jumped from 125cc to Moto2 I suffered slightly more than when moving up to MotoGP. The move from Moto2 to MotoGP is not as big as from 250cc, because I had ridden with a four-stroke engine in Moto2 and the weight of the bike is similar to a MotoGP machine. With the electronics you have to adapt a lot, but the rest is pretty similar. Also, the tyre profile is quite similar. There are positives and, probably, some negatives.

In Moto2 I learned many things. In 125cc it is different because you can go all-out from start to finish, but in Moto2 you need to learn to manage tyres, and adapt to a full or empty tank, which is an aspect that you almost do not notice with the smaller bikes. It is also a closely fought category where you and your team make the difference. We learned many things and all this experience helps us in MotoGP now.”

“It depends on the race. I enjoy riding in MotoGP most, because in Moto2 there was always chatter or something, and the bike was never going perfect. We were all equal and the difference had to be made by the rider. MotoGP is the most enjoyable class, but perhaps the most fun races were in Moto2. Now, at each circuit I still suffer some chatter, but compared to Moto2 it is almost nothing.”

“In MotoGP overtaking is tough, because the bike weighs a lot and you have to be very confident when you pass. Especially when braking, because with carbon discs it is right at the last second. The tyre also allows you to brake very hard, so we see little overtaking. We also go very fast and you need to have your passes planned, although when a rival is in reach you can adapt your plan a little more.”

“If he’s lucky! I do not want to think about it because, as we have seen in the last two races, in a championship anything can happen. There is still half of the season left and these last two races have gone pretty well, but we have to see things in the real conditions, with Pedrosa and Lorenzo fully recovered. Meanwhile, we are getting these results and, as we are right up there, there’s chance.

Consistency also counts for a lot. Perhaps this is more impressive than the wins. But the reality of fighting for the podium at every race is good news.”

“This is a big surprise and good news. Except for Mugello, in every race I have finished on the podium. Consistency also counts for a lot. Perhaps this is more impressive than the wins. But the reality of fighting for the podium in every race is good news.”

“You learn a lot. They are riders who never throw in the towel, as we have seen. You learn a lot riding behind them and alongside them, seeing how they tackle the races, seeing their strategies –also a very important aspect. You pick up little things and then try to use them.”

“He is surprising everyone. This winter I saw him looking very strong when doing motocross. I was convinced he was fast. I had to push in order to stay ahead of him. Preseason training at home has paid off. We strive to achieve the maximum together and that helps us to remain in good shape, because even by training together we help each other.”

“The three-year age gap makes a difference, but the truth is that he is going very fast. I can still hold up against him. But there will be a time in which I can no longer be so sure, because I was not as physically strong as him at his age.”

“There are some plans. Beach, sun and friends. I won’t have much of a break, but during a short week I will disconnect and then continue training.”

“I’m thinking about it, but also it is good to have a week off Twitter and Facebook.”