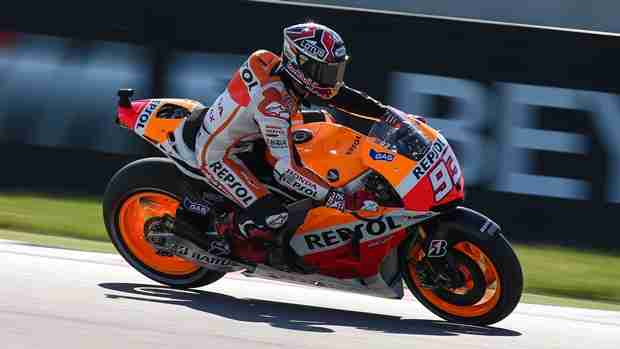 Repsol Honda’s Marc Marquez resumed the dominant form he showed in yesterday’s practice sessions to smash the qualifying lap record on his way to pole position at Misano. Marquez set a scorching lap of 1’32.915 to beat the existing lap record by 0.223 seconds and take the first slot on the grid for tomorrow’s race ahead of the Yamaha Factory Racing duo of Jorge Lorenzo and Valentino Rossi who qualified in second and third place respectively. All of the riders on the front row set their best time on the combination of the softer rear and the harder front slick tyre and the San Marino Grand Prix is the fourth round in a row where a new Circuit Best Lap record was set in qualifying. Power Electronics Aspar’s Aleix Espargaro once again used the full potential of the CRT-specific softer rear slick to qualify directly for QP2 and claim sixth position on the grid for tomorrow’s race with a time of 1’34.732 to be the best CRT qualifier.

The weather for today’s practice and qualifying sessions was practically the same as yesterday, with the same peak temperature recording of 39°C being reached during qualifying. The grip level of the circuit did not improve from yesterday and as a result the softer slick options were widely used today, particularly for the rear tyre. Although the softer rear slick was the preferred option, those riders that used the harder rear did report it performed well with only a slight reduction in edge grip compared to the softer rear. Both front slick options were used today with no clear preference emerging in today’s sessions. The harder front slick offers greater stability in the faster sections of the circuit, while the softer front slick offers an advantage in edge grip which helps compensate for the poor grip level of the tarmac.

“I’m very happy with this pole position, as we had a really good hot lap! It’s a shame about the small crash that we had in practice this morning â€’which was completely my faultâ€’ but the important thing is that we know where I made the mistake. In qualifying I felt very comfortable every time on fast laps and was able to put in some quick times. We’ll see if we can fight with Jorge [Lorenzo] tomorrow, as he has a very good pace. Valentino [Rossi] will also be tough to beat, because it is his home race and he has been very strong in practice; I’m sure that he will be fast tomorrow as will Dani [Pedrosa]. The aim is to get a good start, try to ride in the lead group at the front and pick up more World Championship points.”

“I expected to struggle less this weekend and go faster than last year but I couldn’t be faster and I couldn’t improve the bike so much. We improved a little but not enough to be closer to Marc. He made an amazing lap. We are struggling to stop the bike in braking and we have more spinning than normal in acceleration, that is why the lap time is not great. I will try to make a good start tomorrow and maybe the best strategy is to follow Marc and see how our performance is during the race.”

“We are satisfied with yesterday and today because we worked very well during the practice, I was always strong and we improved the setting step by step. This afternoon my bike was fantastic; it had a great setting with a lot of grip. With the second tyre I was alone with no traffic and I pushed very much from the first corner with a great feeling with the bike and I improved my lap time a lot. I’m happy because it’s very important to start on the front row tomorrow as Marc and Dani are very fast and also Lorenzo is very strong and very fast. Tomorrow I want to arrive on the podium so starting with them from the beginning is important to fight for it. I want a great race and I want to be on the podium!”

“We had a bit of luck to take fourth on the grid, because we have been having problems with all the rear tyres that we have used. I don’t know exactly what happened, but I didn’t have any grip in any of the sessions today. In the final free practice session we changed the tyres twice, then in qualifying we again switched to new rubber, but there was never a good response. We don’t know if the problem is with the tyres, with the bike or with the track surface. In the final moments we made another change and suddenly I had some grip again, and it is thanks to this that we were able to take the fourth fastest time â€’although this position was certainly short of our aims for today. For tomorrow, however, we are confident that we can get a good start and have a good race.”

“It has not been an easy weekend at all and having to go into QP1 for the first time this season was proof of that. So considering how difficult it has been I am really pleased to be starting on the second row of the grid. This afternoon was much better and as I always do, I managed to pull something out of the bag in qualifying. I am always strong in this situation but I really had to be today to get myself out of trouble. We still need to find something else for the race because the gap to the front is pretty big. I am definitely trying my hardest but I have lost some confidence on the bike since the middle of the season and now I have to improve to go faster. One area I definitely need to look at is T3 because I am not fast enough in that sector. I’ll try and get a good start and go with the leading group and I will be doing my best to deliver a positive result for the Monster Yamaha Tech 3 Team.”

“Even today it was very difficult for us to challenge the front guys. Honestly I am not confident enough and this front-end issue prevented us in taking the second row. I think that the Team made a very good job because we improved the bike a lot from yesterday and we definitely changed a lot of things in the bike but I could adapt quickly. I am definitely trying my hardest but with this limit I could not push myself beyond the 7th place today”.

“I can’t say I’m happy because we showed in free practice that we have good potential here but we didn’t manage to confirm it in qualifying. I am disappointed because we have done a good job so far this weekend and I expected better. I can take comfort from our race pace and hopefully with a good start tomorrow we can make ground up, even though it won’t be easy at a track like Misano where it’s not easy to overtake.”

“I’m fairly satisfied. We are still struggling in the fast sections and I can’t push the bike how I would like. I am still confident we can improve this situation for tomorrow and have a good race. We’ll try our best because we all want the best possible result at the team’s home race.”

“I’m really disappointed with qualifying because I wasn’t able to put together a perfect lap, and starting from the third row will make things difficult. It was important to try to make row two here because the first few corners are challenging, and it’s difficult to overtake riders. We might have the pace to fight for sixth place, which is something we haven’t had in recent races, so that’s fairly positive. It will be a long and difficult race, but we’re in a bit better shape than we have been for the other races.”

“Obviously, things aren’t going as well here as we’d like, as tenth in qualifying is a long way from the top. The actual lap time wasn’t so bad, but nonetheless, the others are far away. We’re struggling a lot over the bumps and with edge grip, especially in the last corner. We’ve got some issues to sort out so we’ll definitely try something in the warm-up to see if we can improve the pace. We know tomorrow’s going to be a hard race, but anyway, we’ll line up and do our best.”

“Unfortunately today didn’t go according to plan at all and being 13th on the grid is not ideal. I improved my pace from yesterday by over a second but clearly it is not enough. I’ve crashed twice now this weekend by losing the front, so it shows we have a problem and we will have a good look at the data tonight to find some improvements in that area. We made a really good step overnight with the bike for FP3, but this afternoon we didn’t really make any progress. It is going to be a very tough race and if I can get a top 10 finish I will class that as an amazing result.”