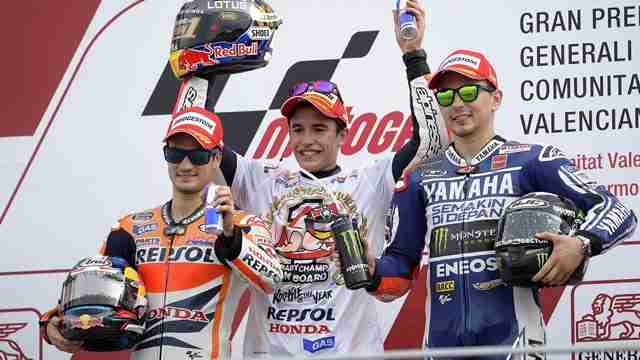 Repsol Honda’s Marc Marquez is the 2013 MotoGP World Champion after the rookie took third place behind race winner Jorge Lorenzo to become the youngest ever premier-class title holder. Lorenzo, Repsol Honda’s Dani Pedrosa and Marquez were engaged in an enthralling dogfight in the opening laps, before Lorenzo broke away in the second half of the race to win comfortably by 3.934 seconds. Pedrosa took second place, while Marquez rounded out the podium in third, the result ensuring he becomes only the second rider to win the premier-class world championship at the first attempt. First CRT rider across the finish line at Valencia was Power Electronics Aspar’s Aleix Espargaro who took eleventh place.

Today’s weather conditions were similar to the previous two days of the race weekend, with fine, dry weather and a peak track temperature of 30°C recorded at the start of the race. Faced with the same track conditions, tyre choice was similar to that seen in practice. For the rear tyre, there was a clear preference for the hard compound rear slicks amongst the works riders and a preference for the softer rear for the CRT riders. Nine of the thirteen works riders — including all the riders on the podium – selected the new hard specification rear slick, while eleven of the thirteen CRT riders selected the soft compound rear slick. For the front tyre, only two of the twenty-six starters selected the softer front slick, the majority of the field selected the harder front option. The pace in today’s Valencia Grand Prix was record-breaking with Pedrosa setting a new Circuit Record Lap of 1’31.628 and the overall race time beating the old record by thirty-three seconds.

The Spaniard has clinched the MotoGP World Championship in his rookie season and, at just 20 years and 266 days old, the Repsol Honda rider replaces Freddie Spencer as the youngest rider to win the title in the premier class.

Six wins, 6 second places and 4 third-place finishes in the 18 races held so far this season is an impressive haul for the rookie in his fist premier class campaign. Marquez’s title adds to his honour roll of a 125cc World Championship (2010) and a Moto2 title (2012). He is the youngest rider to take the crown in all three Grand Prix classes.

With the milestone reached today, Marquez completes a superb maiden season in the premier class and leaves behind a legacy of records and successes.

“It was a really long race, maybe the longest of my career! At the start I was very nervous, I know I said I wasn’t but if I’m honest I really was. Jorge had a very good start, as usual, and I wasn’t sure which tactic to take. I followed Jorge and Dani and began to settle into the race. Then towards the end, I decided not to push as I knew my position was secure and safe to take the Championship. It has been a fantastic year, I am still in a dream! I really didn’t expect this at the beginning and I am really so very happy. So thank you to all my team, my family and of course Honda and all our sponsors. The support from everyone and all my fans around the World has been incredible and I dedicate this Championship to you all!”

“I slowed the start of the race a little but I think it didn’t work out because the other riders, Bautista, Valentino, Crutchlow and the others needed some tenths more to stay there. I tried first and last to play a little bit with the race and I managed it quite well but I couldn’t stay there for too long. When I looked behind I could see that Valentino was very far away so I thought that today it was better to concentrate on winning the race and waiting to see if Marc makes a mistake. Now we have to celebrate second in the standings which is a good place. We have to congratulate Marc because he really deserved the championship and we will make a party tonight!”

“The race was difficult at the start because of the overtaking moves between myself and Jorge [Lorenzo]. However, we fought to the limit until I was taken a little off the track and lost ground as a result. Above all, I want to congratulate Marc [Marquez] today. He has done an excellent job this season and had a great campaign. We should take our hats off to him because he has achieved something historic; to win the MotoGP title as a rookie is incredible.”

“The race was not so bad, especially after this morning where I had a lot of problems and wasn’t fast enough. Unfortunately I didn’t have the pace to fight for the podium. I was able to stay close at the beginning and try to fight but after I didn’t have the speed, like more or less all the season where I am two or three tenths slower compared to the top guys. For this reason I couldn’t challenge for the pole position, the race and the championship. The season was not so bad for me but we have to try more to increase our speed and our performance to fight for the podium more constantly. This is the target for 2014.”