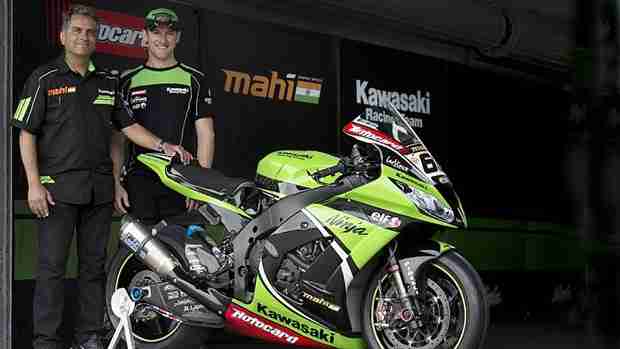 The ambition of both Kawasaki and Mahi is to make a strong impact at the first round of the most important production based racing series in the world and this ambition has brought about this co-operation in the Superbike class, with the Kawasaki Ninja ZX-10R machines of Tom Sykes and Loris Baz, plus the Kawasaki Racing Team’s pit box, now adorned by prominent Mahi India branding.

Mahi is an Indian ‘dream-team’, the brainchild of Amit Sandill and Andrew Stone, and is a project supported by Indian cricket superstar Mahindra Singh Dhoni and equally famous Indian actor Nagarjuna Akkineni. They are enthusiastic bike fans, with a passion for the exciting sport of motorcycle racing.

The aim of all involved in the new Supersport team and KRT sponsorship agreement is to bring motorcycling to a much wider global audience via the medium of racing. As part of this overall plan there is an Indian round of the World Superbike and Supersport championships scheduled as the season finale at the impressive Buddh International Circuit near New Delhi on November 17th. This round should act as the springboard to aid the growth of motorcycle sport in India and beyond.

The 2013 Kawasaki Mahi Racing Team India Supersport World Championship squad has already drawn a great deal of interest in the 600cc class of racing, as it fields two proven World Champions in this production-derived class. The factory-supported Kawasaki Ninja ZX-6R machines, closely based on the road-going models, will be ridden by three time and reigning champion Kenan Sofuoglu from Turkey and 2001 season champion Fabien Foret from France. These two riders are the most successful there have ever been in terms of Supersport race wins at the highest level. Kenan was champion for Kawasaki in 2012, winning four races on his Ninja ZX-6R, and taking his record win total to 21. Fabien has 15 career Supersport World Championship race wins – four on Kawasaki machines. The team has already shown their strength by winning the opening round of the championship last weekend at Philip Island.

Amit Sandill, Kawasaki Mahi Racing Team India Principal: ”This new initiative makes sense because of the TV coverage that the superbike class gets. Superpole 1, 2 and 3 at each race, plus the two races themselves. Back home in India the coverage of Superbike is more than for Supersport right now so that is why we put a sponsorship amount into the KRT team. We are sure there is a great value in that. It is a great team, a top level Superbike team. Our Supersport team is also working out really well, we are very happy with it and the riders are out of this world. It is a challenge at the same time, the other guys all want to beat you, but both our riders are so focused it is unbelievable. It is a pleasure to be in a team with them.”

Guim Roda, Manager Kawasaki Racing Team: “We are happy to welcome Mahi on board for the Australian round. For this race, it will be an extension of the big and very good project they are building in Supersport. We will try to give them positive results in this first race and show their brand all over the world, supporting as much we can the Supersport category with Kenan and Fabien as well.”

Andrew Stone, Kawasaki Mahi Racing Team India Technical Director: “From a Mahi branding point of view this involvement in KRT gives us more TV coverage and makes more people aware of Mahi in the world’s media. It also cements our relationship with Kawasaki in general and our commitment to the brand. We are looking forward to a good strong year with them in the Supersport World Championship.”