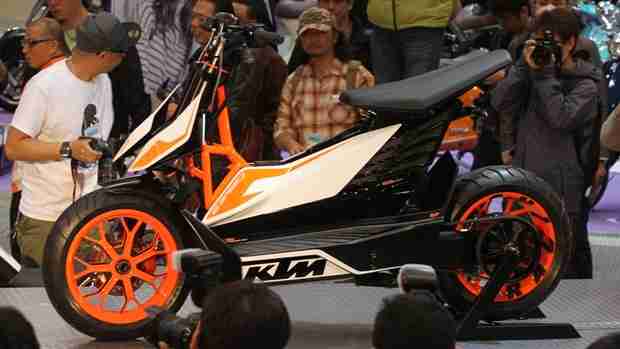 The ongoing Tokyo Motorcycle show has seen KTM unveil a surprise, an electric scooter named the KTM E-Speed. Surprise because this contradicts KTM CEO Stefan Pierer statement couple of months back where he said it is still too early for electrics. Clearly now he totally meant that for bikes. The KTM E-Speed probably is one of those electrics that actually does not look like a malnourished frog. In fact the E-Speed looks like one of those predators from the insect world.

The E-Speed shares the power train and the 4.336 KWh lithium ion battery from KTM Freeride E. The motor can make a peak torque of 36 Nm and a constant power of 11 Kw. The battery is good for a range of about 40 miles with it taking two hours for a full charge. The scooter comes with ABS with regenerative braking and of-course features all thing KTM, a state of the art hybrid trellis light metal frame and a lot of orange. The battery and the motor do take its weight to a high 140 kg though making it on the heavier side. Oh and in case you were wondering its liquid cooled too.

KTM CEO, Stefan Pierer said: “We at KTM are completely convinced of electric mobility as a perfect complement to conventional power-trains. In the long term, the electric drive will come out on top for short distances — particularly in areas which are highly sensitive from an environmental perspective, like open nature and densely populated metropolitan areas! Vehicles like the ‘E-SPEED’ and FREERIDE E can help powered two-wheelers win back more acceptance in society. Not just because of their environmental credits, but because they are easy to use, quick, and simply great fun.”