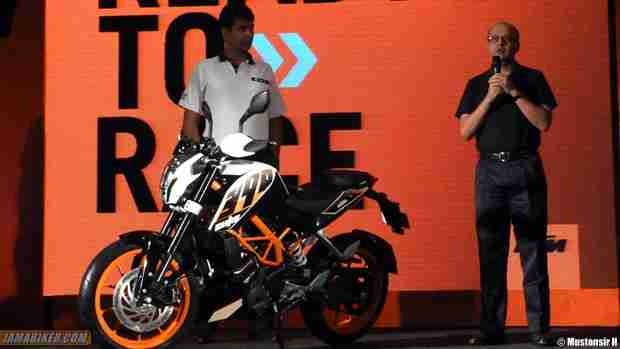 Photography and text by our correspondents Mustansir H. and Sarayu Karnoor

25th June 2013 marked an important day in the Indian motorcycle community. The much awaited and eagerly anticipated unveiling of the KTM 390 Duke was done in front of a small but excited bunch of auto journalists. The event was headed by Mr. Amit Nandi, Vice-president Bajaj Probiking. Also present at the launch was Mr. Rajiv Bajaj.

Mr. Nandi started the event with a brief overview of the Bajaj owned (48%) KTM brand. Internationally, they have been a big name in almost every motorsport event. The fact that KTM motorcycles have won the last 13 consecutive Dakar Rallies since 2001 just goes to show they take the ‘ready to race’ phrase very seriously. Even in India, they won all 3 positions of the podium at the Raid de Himalaya 2012 and the top two spots of the Desert storm 2013.

The Duke 390 is the latest motorcycle in the streetfighter range offered by KTM which also include the 125, 200, 690, 990 and the latest 1290 superduke to be launched by the end of the year. The 200 caused waves when launched in India and won almost every award there was to offer for motorcycle of the year 2012. The 390 seems to promise just as much and then a bit, rather a lot more. The 390 comes fitted with an all new engine that Bajaj claims to be 95% different from that on the 200. Taller gearing, Nikasil coated cylinder with forged piston, DOHC with DLC (diamond like carbon) and actuated finger followers at the valves all hint towards a high end motorcycle with specific attention to reducing friction, vibrations and increased reliability. The end result is a 43.5Ps, 35Nm, 373.2cc monster of an engine fuelled by a Bosch EFI capable of 160kmph.

The bike design borrows heavily from the current 690 duke. The iconic orange steel trellis frame makes the chassis, coupled with a light-weight die cast aluminium swingarm, 43mm upsidedown Forks and a single rear shock absorber by WP give the bike a kerb weight of 154kgs. This gives it power to weight ratio of 300Ps/tonne and 241Nm/tonne, making it difficult to beat in any segment. The 390 comes equipped with Metzeler 17inch tyres with cast aluminum steel wheels. 300mm front and 230mm rear disc brakes by Bybre and a disengageable 9MB ABS by Bosch as standard fitment making this a safe and predictable motorcycle.

The cockpit is extremely well equipped with electronic gadgets that are not available even on some top end cars. Distance to service, Oil temperature, fuel economy, distance to empty etc are some of the features seen on the display. Also available are hand-guards as standard fitment. The Duke 390 will also have the KTM powerparts specific to it available. Windshield, Tank bag, carrier case and carrier plate makes this bike equipped for touring as well. Front and rear crash pads add to safety of the bike.

The Duke 390 seems to have created a new segment. The bike thus will mostly play a spoiler in other segments and will probably take a share of the cake. Target groups include upgrade from the 200, upgrade from mass sport bikes (CBR, R15 etc), the high end sportbikes (Ninja 300, Hyosung 650 etc) and the tourers that seem to be dominated by Royal Enfield.

The Duke 390 is launched at an unbelievable price of 1.8 Lakh ex-showroom. This is an introductory offer and although there is no immediate plan to review the price it could go up depending on sales volumes and cost of manufacture in the future. Bookings opened today at all probiking showrooms and deliveries to be given 90 days after. Right now the bike is available in just one colour-white which is similar to the current 200 but by the end of the year, more colour options may be available. The company plans to sell about 12,000 units per year and the bike is built ground up at the Chakan plant from where it is exported to Europe. 1500 to 2500 units are exported per month. The parts are locally sourced except for a few.

KTM has moved ahead of BMW as the leading motorcycle manufacturer in Europe and second only to Harley Davidson in the world. By the year 2017, the company expects to produce 2,00,000 units per year out of which 1,00,000 units to be built at the Chakan plant. Mr. Bajaj said that the entire duke range is unlikely to be brought to India, but the option of the yet to be launched Superduke 1290 coming in as CBU is quite likely. The company is also looking at bringing in bikes from the other range into India with the most likely one to be a miniature RC8 fitted with a 200cc to 375cc range of engines.

The future definitely looks bright for KTM and the Indian motorcycle enthusiast and if the pricing for the other to be launched products seems to be similar, other manufacturers definitely need to re-think their game plan. 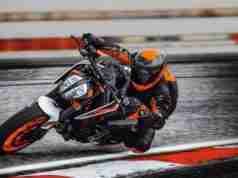