The MiTO SBK Limited Edition and the Mito Superbike Special series was first show cased last year at the Paris Motor Show by Alfa Romeo. This was to celebrate the seven year long collaboration with the WSBK championships as a sponsor for the official safety car. The special edition will finally reach stores in the UK later this month and to mark this special occasion Alfa Romeo brought in car stunt rider Paul Swift and Kawasaki WSBK rider Chris Walker to the Silverstone circuit for a special bike versus car video. 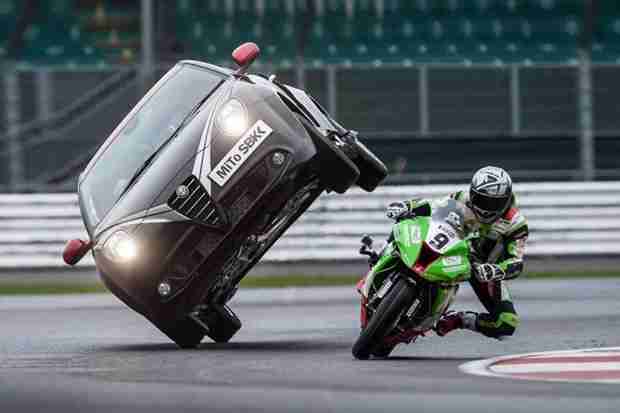 The Swift and Walker, champions at their sport showcased some brilliant manoeuvres. One that needs to be of special mention is when Swift got the car on two wheels and Walker got in close beside it. The MiTo is powered by 1.4 Turbo MultiAir 170 HP Quadrifoglio Verde engine with SBK Limited Edition decals, racing body kit including side skirts and rear lower spoiler, complemented by 18” alloy wheels and red Brembo brake callipers for some added visual treat. The limited edition is available in Solid Black with an Alfa Red roof. The 2013 Ninja ZX-10R was upgraded with the addition of an electronic Ohlins steering damper controlled by a dedicated ECU with the electronics varying the unit’s damping based on the rate of acceleration or deceleration as well as rear wheel speed.