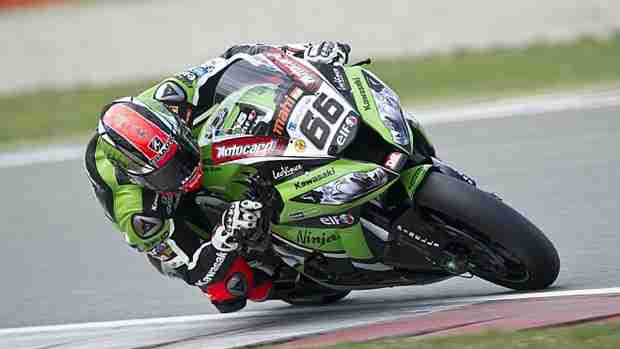 Kawasaki Racing Team rider Sykes posted a convincing race one win at the previous round in the Netherlands and then followed that up with a second place in race two, results which put him in a strong position revisit a circuit he won at in 2012 on his official Ninja ZX-10R. With improvements evident Kawasaki Racing Team’s official machines in this year’s SBK fight Sykes is out to move on from the joint second place he holds in the points table going into Monza. He is tied on the same total as two other riders after three rounds and six individual races, with Tom sitting 28 points behind the lead at this early stage of proceedings.

Loris Baz, a wet race winner for the Kawasaki Racing Team back in 2012, had a great recent podium experience at Assen, securing a hard-fought and fully deserved third place in race two in dry conditions. This result has proved that the second regular Kawasaki Racing Team rider in the 2013 entry list is now a contender with the established top runners, despite being only 20 years of age. Baz is sixth in the table after three rounds, just five points behind Jonathan Rea as the Monza weekend approaches. Federico Sandi (Kawasaki Team Pedercini) will compete on his Ninja ZX-10R in the SBK class as usual but with his Swedish team-mate Alex Lundh out with a broken collarbone, suffered in hard fall at Assen, Sandi is partnered by regular CIV rider Fabrizio Lai, in what will be a home race for both riders. Superstock 1000 FIM Cup and Superstock 600 European Championships will reach round three at the Monza meeting, always a popular venue for fans given the circuit’s close proximity to the major Italian city of Milan.

“I am obviously very motivated off the back of the Assen weekend. It was so enjoyable there because I went there thinking it was not going to be our strongest point in the season but I almost had the full set of two wins and Superpole. Our bike is working great and the changes made to the bike this year look like they are having the desired effect across the board. The wet session in Assen was nice because it ticked off a box that used to have a question mark in it. Moving to Monza now, I am looking forward to it because I won the only race there last year. It is a circuit I enjoy because of some good past results and it is nice to ride as well because it has a great history. The Ninja ZX-10R is a very well balanced package and we are going there to do a job now. The championship position is very unusual with three riders on the same points in second place, although I am not too concerned with the championship placings at this stage. I’m just looking forward to keeping up momentum and improving things again in a couple of areas.”

“After the last round I needed some time to relax after doing the Bol d’Or 24-Hour race the weekend before, then going straight to Assen to race in SBK. I was not tired even after the races in the Netherlands but when I got back home I was getting more tired and more tired all the time. Last Wednesday I was destroyed! I trained just a little bit that week but now I have started training hard again. I was really happy with the podium at Assen and it has come along early in the season, earlier than we expected. We knew we were faster than last year in the dry but it is clear everybody has done a good job and we will continue to work in the same positive way. I am confident for this weekend. I know the track at Monza is totally different from Assen and in some ways it looks like it may not be the best track for us. But I am confident because we have made a good improvement in this kind of track, after our performances at Aragon, even in the parts with slower corners. I won a Superstock 600 race at Monza in 2008 and I like the circuit. It has a really fast straight and although we know some other bikes are going to be fast there, we also have a good engine. I feel we can be maybe top five or top six, and that is always the same target.”