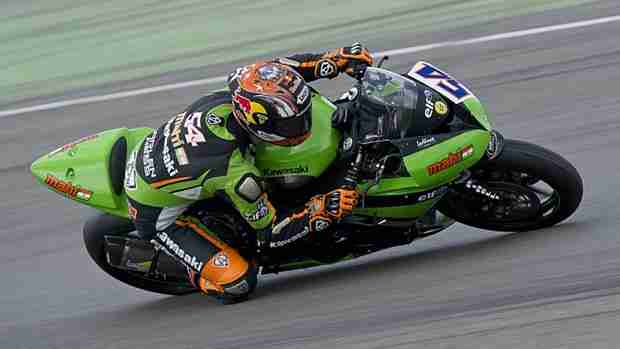 Foret extended his championship lead to five points at the previous round in Assen after a fine third place run while his teammate Sofuoglu was one better on the day in the Netherlands, a result that put him fourth in the official rankings and only nine points behind Fabien. The Mahi team has taken the lion’s share of the points for Kawasaki so far but all through the field there are strong runners on Ninja ZX-6R machines. Luca Scassa (Kawasaki Intermoto Ponyexpres) made a run to third place at Motorland Aragon in round two, but with a DNF at the most recent round privateer rider Andrea Antonelli (Goeleven Kawasaki) is now fifth overall, thanks to a fast and consistent start to his season. Scassa is sixth, only three points adrift.

Florian Marino (Kawasaki Intermoto Ponyexpres) will ride for the Czech-based team again while regular rider David Salom continues to build himself back to full fitness after injuring his hand in a training crash. Marino has proved his worth already by finishing fifth at Assen last time out. Kevin Coghlan (Kawasaki DMC-Lorenzini Team) led a race for a time in Spain and he continues along his learning curve in this class at Monza. His team-mate Vladimir Ivanov (Kawasaki DMC-Lorenzini Team) is only two places behind him in the championship rankings after Assen, 17th.

“Just like the first three races, my aim this time will be to get myself on to the podium. We just hope for good weather to let us get our set-up ready early in the weekend because this track is quite different from the previous one at Assen. I have had some good races in the past at Monza, we have a pretty powerful bike with the Kawasaki and it is also good on the brakes. There is not reason why we should not feel confident going into this race.”

“I think Monza can go well for us because I am riding a Kawasaki which is a powerful bike. Also I think in hard braking the Ninja ZX-6R is one of the good bikes and it also has a lot of acceleration power. I believe our package will be even better here than in Assen and we should probably be able to go for a win. I think Fabien will also be in there for the race so there should be two Kawasakis at the front. That is my expectation. I will start with the bike set-up like we had at Aragon because there are some similarities between Monza and the Spanish layout in the fast changes of direction. I think that an Aragon bike set-up should not be too far away from the start in Italy.”