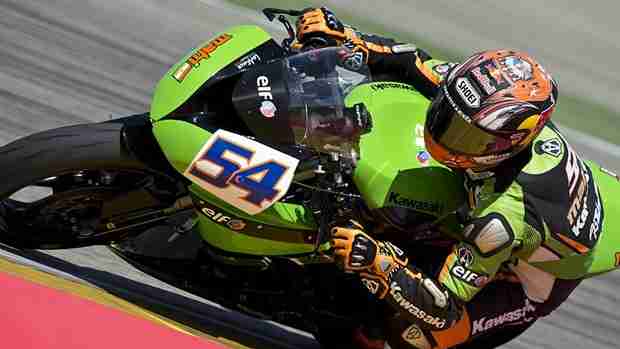 Kenan Sofuoglu scored his first pole win of the season as he goes for his second race win of the year on Sunday and he will be joined on the front row at Motorland Aragon by his team-mate Fabien Foret. Sofuoglu feels both his bike and team set up has been improved since the last round in Australia, several weeks ago, and that showed in his final lap in qualifying when he posted a 2’01.450, only just off the new track best for this class. That had been set in a free practice session by another rider and was only 0.025 seconds faster.

Foret encountered some issues for a time but he was able to join with Sofuoglu for a final push to set a strong qualifying time and Fabien is now also on the front row, in third position. Always a rider who can shine on race day, Foret is now looking to improve his overall pace and make a strong showing in the 18-lap WSS race. Kawasaki DMC-Lorenzini rider Kevin Coghlan was impressive at a circuit he has recently tested at, going fifth in a field of 35 riders. Luca Scassa took his Kawasaki Intermoto PonyExpres machine to seventh place on the grid. His team-mate David Salom misses his home round through injury but Florian Marino, who was a fine 15th in qualifying, replaced him at Motorland. Puccetti Racing Kawasaki rider Riccardo Russo was an impressive ninth on the grid, while Vladimir Ivanov finished up 11th on his DMC-Lorenzini Kawasaki. Practice and qualifying were held in good conditions, with a dry track to work on for all riders in all classes.

“My goal was to be on the front row and not to push for a pole position time. I was thinking if it was necessary to try and go faster than Sam Lowes on a 2’01.6 because the race is tomorrow, not today. Fabien had a little problem on his bike earlier so we decided to go out again with him and finally my pole position time was good. It is nice to have it but not necessary for me; it is most important to take 25 points tomorrow. My bike set-up is quite different today compared to yesterday and we have found quite a good way. It looks like I can ride inside 2’01 pace consistently now. I do not have to push too hard to get to that pace and everyone is working well inside the team. We made a list of things to improve on after PI and it looks like everything is already much better. We are just waiting to start the race now.”

“I am happy to be on the front row because we had some problems earlier. I have to say thank you to my team and to my team-mate Kenan for doing a lap with me later in the qualifying session. It is good to have been able to make an improvement and now start near the front for the race. I think there is still a bit of lap time to find and we are now working to find the best set-up for raceday.”