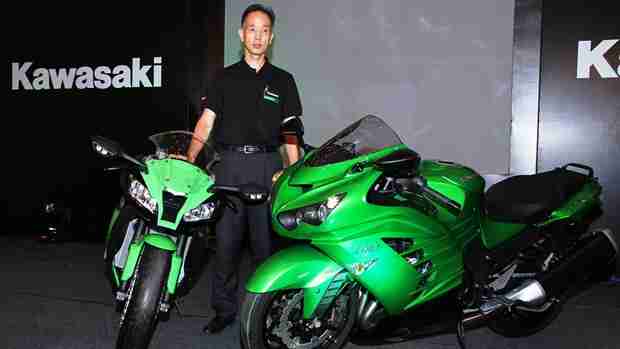 India Kawasaki Motors (IKM) today launched two of its highly celebrated motorcycles the Ninja ZX- 14R and ZX-10R for the Indian market to strengthen its product portfolio. These world renowned bikes skilfully combine power, torque, dexterous handling and super-sport styling. In India, the bikes will be imported as completely built units (CBU) from Japan and will be retailed through the newly established standalone shop of Kawasaki at Wakdewadi in Pune. The shop will be inaugurated on September 7, 2013 and bookings of the bikes will commence from September 5, 2013. The bikes will be priced at Rs.16.90 Lacs for ZX-14R and Rs.15.70 Lacs for ZX-10R, ex-showroom Pune.

Kawasaki’s newest flagship is the ultimate blend of Extreme Excitement and Everyday Versatility. The inimitable road presence of Ninja ZX—14R exemplifies it as direct descendent of the original Ninja. The Ninja ZX-14R ranks amongst the fastest production motorcycles ever offered to the public with a gut-wrenching acceleration that effortlessly pushes the bike to its high speed. The 14R comes with an in-line four, four-stroke, liquid cooled and 1,441cc power-plant, this making up to 210 bhp with Kawasaki’s renowned ram-air system feeding the engine more air as speeds rise. The bike uses a six-speed gearbox.

Ninja ZX-10R is a circuit performance machine, with razor sharp handling, aimed at professionals. Featuring a new engine, new frame and new suspension, Kawasaki’s newest litre bike represents the first complete redesign since the Ninja ZX-10R’s debut, and offers a significant jump in base performance. The bike has an in-line four, four-stroke, liquid cooled, 998cc engine. Equipped with a six-speed gearbox, the ZX-10R is armed with top of the line suspension fully adjustable front and rear with inverted forks and a horizontal mounted, gas charged monoshock at the rear. The 10R comes with disc brakes at front and rear, a set of 310mm, petal type rotors in front. Cutting edge technology and features like Kawasaki’s new race type traction control system (S-KTRC) and supersport grade ABS (KIBS) are equipped to assist as riders explore the bike.

“We would take this opportunity to thank our partners Bajaj Auto for the incessant support in setting up this business and will look forward to their continued collaboration in the future. With the positive feedback on our existing models such as Ninja 300 and Ninja 650, I am confident that the new launches will also be accepted by the Indian consumers enthusiastically. India is an important market more us and which is why we have brought the latest and the best of Ninja’s portfolio in the country. We are optimistic of introducing 1-2 launches of this stature every-year.”

In the steady super-bikes market of India, IKM initial target for sales is 100 units per year. IKM will expand its business territory in a phased manner, with its focus on Maharashtra, followed by the rest of the country. IKM is looking at carefully selecting and training staff that can work on the two valued motorcycles. The Ninja ZX-14R and ZX-10R will be sold and serviced through the exclusive shop of Kawasaki.