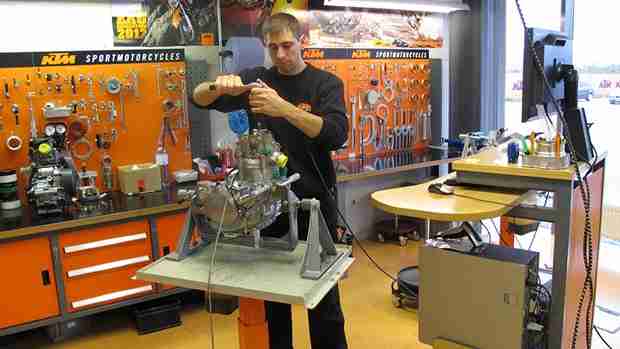 Where does the life of a motorcycle start? With a diagram on a computer? During final assembly on a production line? If a customer climbs on and fires it for the first time? There are many different interpretations. All we know for sure is one thing: without an engine there is no bike. The heart of each and every KTM (well almost) is created within the engine plant in Munderfing in Austria, a short distance from Mattighofen. Nearly 200 people work here every day and produce 300 to 400 engines. Two-stroke and four-stroke, single and twin cylinders. A truck comes twice a day, in the morning and at noon and transports the completed units over to the final assembly line.

The KTM engine plant is divided into three areas: assembly plant, mechanical manufacturing and parts warehouse. First let’s take a look at the impressively large parts warehouse, where everything is placed on high shelves in boxes and pallets. Here all the necessary components for the construction of an engine are stored: from spark plugs to pistons or transmission parts, from cylinder studs to clutch springs or electric starter units. Consider this: the 350cc four-stroke SX-F engine for example consists of 389 parts and 78 screws. But the plant in total produces 13 different types of engines (if Moto3 is included), from 50 to 1190 cubic, two-stroke and four-stroke. So it is quite a logistical challenge to cope with productions runs everyday.

The next area is mechanical production. Here we find 16 mighty CNC machining centres, where cylinder heads and housings and various other parts are automatically milled and drilled with incredible precision. Machining processes are pretty time consuming, so work here is run around the clock in three shifts. You do not necessarily need a passion or interest for engineering or industrial machining to be fascinated standing in front of these feats of technology and how the clamped work pieces behind protective covers are moved, treated and worked on.

Noteworthy: Once the cylinder gasket area (where cylinder and engine housing meet) of the engine case is machined, these two engine halves remains ‘matched’ together for the further production process. Afterwards machining of all bores, threads, machined surfaces and edges of each work piece are de-burred (read: grades are taken away) by hand, which is extremely labour intensive. Once done, all finished engine parts go through a car wash in baskets and are rinsed again to perfect cleanliness.

Construction finally takes place at two assembly lines with 21 stations each. The cycle times at each station are dependent on the model, from two to three minutes. From start to finish it takes about 40 to 60 minutes to build one engine. The supply of all stations with the required components is continuous. In the winter more road engines are produced; in spring and summer more off-road.

Engines on the assembly line are built piece by piece from the bottom up. Before this task starts, the vertical split case halves are completed in a dedicated work area with bearings and shaft seals. Line production begins with the insertion of the crankshaft, followed by gears plus the shift drum. After the housing halves are sealed and screwed together, clutch, ignition, electric starter, oil pump and a plurality of outer covers follow or are added.

After that the base motor receives its cylinder studs, followed by piston plus cylinder. Next step is the cylinder head. Four-stroke-cylinder heads are pre-assembled in a separated work area close to the assembly line, complete with valves and camshaft; also the valve clearances are adjusted here. After installation of the cylinder head unit the screws are tightened, the cam chain is brought on, screwed to the drive gears and the head cover is mounted.

Finally the hydraulic clutch unit is fitted (supplied already fully pre-assembled with steel braided hose, hand-lever valve and cylinder pressure), followed by the oil filter. Afterwards the engine is filled with oil. At the end of the line the near-completed engines are lifted with a crane on to pallets, which are fitted with packing inserts that fit the lower engine case perfectly, enabling a secure form of transportation. Each pallet with the readied engines is forwarded to the next station; the dyno test runs.

At KTM each motor is tested on the dyno. For the four-strokes, this procedure consists of two parts. After it has been mounted on the dyno each engine is turned without ignition by an electric motor (which is integrated in the test rig) via the output shaft. This serves to check if oil pressure is generated sufficiently and that water circulation works okay. If this is the case, the engine is started on its own for the very first time. This run lasts about two minutes and incorporates a predetermined testing procedure at different engine speeds. At the same time, a check for any leaks or unusual noises is done also the gearbox is tested for smooth operation.

There are different types of dynos. Some build up all necessary connections (fixation, exhaust, fuel, wiring) more or less automatic or semi-automatic, after the engine has been put in, some have to be mounted manually. The circulating cooling water is preheated to smooth out ‘warming up’. The dynos for two strokers logically operates without the oil pressure control task, in addition the test run is used to time exactly the opening of the outlet valve at given revs with help of a spring (which has been pre-adjusted on the line), so that engine characteristics are tuned in the optimal way.

After the dyno test run each engine is back on the palette and transported again to the final assembly area. In this zone each four-stroke engine is lifted and fixed on a working bench, where mechanics first drain the engine oil. After a new oil filter is installed the engine receives a fill of fresh oil. In addition valve clearance is checked again and if necessary reset with appropriate shims.

Why this extra work? Because with the test run oil is pumped through all channels of the engine for the first time. With the additional oil and filter changes KTM chooses the safe side and excludes even the smallest residues from the manufacturing processes with the engine oil during the run-in. The extra valve clearance control allows for additional security, if individual components should have nudged during the first run of the engine, which can always happen, regardless of most precise production conditions.

Finally, the shift lever, drive sprocket (on some models), inlet, vent hoses and, if available, kickstarter are mounted. The two-cylinder engines are completed with throttle body, throttle cable plus a full airbox. Then they’re back on the palette and trucked to the main plant to the final assembly line.

Constant quality control is of course an issue. From each daily production one engine is randomly selected. In a separate workshop in the building it is checked through, dismantled completely and measured to detail. Afterwards a written report is made. Should any concerns show to start up, technicians can respond in good time to ensure high standards.

The KTM engine plant was established in 2002, extensions were carried out in 2007 and 2008. The very first motor produced is exhibited in the entrance area on a display stand. According to its ‘birth certificate’ it rolled off the production line eleven years ago on Monday 26th August at 12.05. This 200 SX engine symbolizes that a motor always is much more than just a cold piece of metal, rather a genesis of power and activity from a totally modern and advanced manufacturing plant, whose products provide customers worldwide with enormous riding pleasure. After all without engines there would be no motorcycles from KTM.