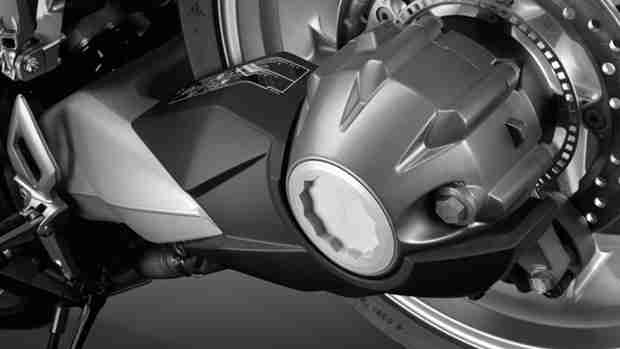 The Dual Clutch Transmission is Honda’s most advanced automatic transmission system for motorcycles. Its layout and manual-like feel are strikingly similar to conventional sports bike engines and their transmissions.

Yes, but with a difference. Honda’s Dual Clutch Transmission utilizes a computerized electro-hydraulic control system to switch between the gears of a conventional six-speed transmission. It is equipped with two clutch packs, and gear selection can be manually controlled by a pair of switches located on the handlebar. The system also has an AT (Automatic Transmission) mode that offers virtually fully automatic gear change control.

Since the system’s two clutches are operated entirely by way of electronic control, the handlebar has no clutch lever.

As the transmission cannot be mechanically shifted by foot, no shift pedal is provided. Note: A foot shifter kit is also optionally available for some models in some countries.

Today, most of the automatic systems designed for motorcycles are continuously variable transmissions (CVT) similar to those used by scooters, etc. In a radically new approach, Honda’s Dual Clutch Transmission features advanced electronic control technologies to achieve smooth and precise acceleration, including a learning function that finds the most suitable start, gear change and running operations for a motorcycle.

Yes, Honda has long been a leader in tackling the many technological issues involved in developing motorcycles that offer smoother and easier operation. Since its founding, Honda has strived to realize a more enjoyable riding experience by reducing the difficulties often associated with motorcycles.

In 1958, Honda developed an automatic centrifugal clutch, introduced on the C100 Super Cub (50cc), which allowed riders to start and change gears without requiring manual clutch operation. In 1963, the Juno M (125cc) scooter was the first ever equipped with a continuously variable hydraulic transmission. In 1977, the large-displacement (750cc) Honda EARA sports bike featured a Hondamatic automatic transmission with a torque-converter like that used for cars.

First, the Dual Clutch Transmission offers smooth, precise operation that provides confident, undistracted control and a more enjoyable riding experience. Its ECU has been specially programmed to automatically control the hydraulic clutch system to intermittently engage the clutch in place of the rider’s left hand, while a motor instantly changes gears in place of the rider’s left foot.

As its Dual Clutch name implies, this compact system incorporates two side-by-side alternating clutch packs, one for odd numbered gears 1, 3 & 5, and one for even numbered gears 2, 4 & 6. In the minute interval before actual gear shifting operation begins, the system automatically prepares itself for the transfer of drive power between gears by starting up the rotation of the gear to be changed to. Its two independently actuated clutches then smoothly transfer rotation speed from one gear to the next without zeroing out the drive force transmitted to the rear wheel. This greatly minimizes the shock of gear engagement, even when changing gears during hard acceleration or deceleration, thus realizing highly precise gear shift operation and smooth, seamless riding enjoyment.

Also contributing to a smoother ride, the Dual Clutch Transmission system’s ECU is programmed to minimize unnecessary gear changes by monitoring riding conditions on curvy roads like mountain passes. This allows the rider to better concentrate on the road ahead, and more fully enjoy the sensations of acceleration and braking, as well as the surrounding scenery. As a result, since the basic mechanism is virtually the same as a manual six-speed transmission, its smooth, highly advanced control delivers precise gear shifts that even expert riders will marvel at, and a higher level of smooth and skillful riding capability that anybody can fully enjoy.

Generally, fuel consumption can vary widely depending on such factors as vehicle speed, engine speed, acceleration method, loaded weight, and such weather conditions as wind direction. In comparison tests of the NC700X, the NC700X ABS and the NC700X with Dual Clutch Transmission, it was found that all three averaged about 41km per liter based on a constant speed of 60km per hour. In other words, motorcycles equipped with Dual Clutch Transmissions proved to be virtually identical to manual transmission models in terms of fuel efficiency.

Operation is not much different from conventional motorcycles, although it does allow one to ride without operating a clutch lever and gear shift pedal. Normally, when starting out on a regular motorcycle, one would first squeeze the clutch lever and select 1st gear with the shift pedal. However, on a motorcycle equipped with the Dual Clutch Transmission, after starting the engine, one simply switches from Neutral (N) to Drive (D) using the S—D-N thumb switch located on the right-side handlebar, and then turns the throttle to start and accelerate.

When first trying out a Dual Clutch-equipped motorcycle, many riders who are used to operating a manual transmission unconsciously grab for the non-existent clutch lever with their fingers, or attempt to operate the shift pedal with their left foot. However, anyone can grow accustomed to the user-friendly Dual Clutch Transmission in about an hour’s riding time.

For sports bike riders, all the operations and techniques associated with riding, including clutch and throttle control, and clicking swiftly through the gears, make up the fundamentals of riding enjoyment. If we look at the Dual Clutch Transmission systems used in professional race cars and some high-end sports cars, we can see that gear changes are performed much more quickly than possible with a standard shift lever. Also, since their paddle shifters are integrated into the cars’ steering wheels, drivers never have to take their hand off the steering wheel, and can thus better concentrate on the intricacies of driving.

In professional motorsports, where races are won with quick acceleration and minimized accumulated time loss, the Dual Clutch Transmission also has the advantage of allowing gear changes to be performed virtually instantaneously. Honda’s latest Dual Clutch Transmission is a compact and lightweight system developed exclusively for motorcycles. We hope you will take it for a test ride and experience for yourself the delight of riding with such precision control at your fingertips.

Engine braking on models equipped with the Dual Clutch Transmission is generally initiated by closing the throttle. For stronger engine braking response, the electronic system can be downshifted much like a standard motorcycle. This is done with a press of its downshift thumb switch located on the left handlebar. If the system detects that a lower gear could result in sudden engine over-revving, it will ignore the operation of the downshift switch. Usually, though, manual downshifting can be initiated at any time by simply tapping the downshift switch, even when operating in Drive mode.