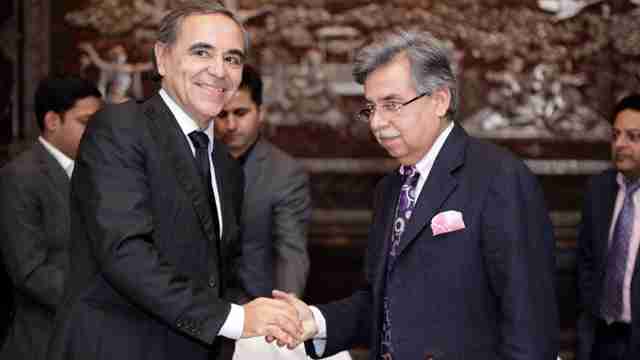 Magneti Marelli S.p.A. and Hero MotoCorp Ltd. have signed a Joint Venture agreement aimed at the production of power train systems for the two-wheeler market. According to this agreement, Hero MotoCorp will hold a 60% share in the Joint Venture, with the remaining 40% being held by Magneti Marelli. The construction of a JV’s production plant is planned by 2015, at a location in India to be defined shortly. The JV will nevertheless be operational immediately, as during this initial phase activities will focus on the technological aspect, with the two companies starting to cooperate in the design and development of the first solutions and applications for motorcycles.

The Joint Venture will be aimed mainly at the Indian market, and its solutions will be made available both to the two wheeler production of the Hero company (the largest in India and in the world), and to the entire two-wheeler market in the country (about 15 million vehicles sold in 2012 alone). The main objective of the JV is to put together a portfolio of advanced solutions for the powertrain control of two and three-wheel vehicles that, by taking advantage of the added value provided by electronics, are able to raise the technological level of the solutions available until today.

These technologies will make it possible to achieve better engine performances, with reduced consumption and emissions, representing in fact a leap in the technological paradigm and thus paving the way for a more sustainable mobility in compliance with future limits for polluting emissions, in a country where a total of over 63 million two and three-wheel vehicles have been sold in the last six years from 2007 to 2013 (source: SIAM, Society of Indian Automobile Manufacturers). The scope of the agreement makes available to the JV Magneti Marelli’s advanced solutions in terms of electronic engine management, including the “ride-by-wire” technology. Since this technology allows electronic handling of the power requested of the engine, it optimizes its operation, in addition to forming the technological base needed to enable future possible solutions for hybrid engines associated with the transmission to be fitted on two-wheelers.

Since 2001, Hero has been the world’s largest manufacturer of two-wheelers. So far, it has sold approximately 50 million motorcycles and mopeds, and currently holds a market share of 46%, with almost 7 million vehicles sold every year. In 2012, it acquired 49.2% of the equity capital in the well-known motorcycle brand Erik Buell Racing.

“The scope of this agreement is – commented Eugenio Razelli, Magneti Marelli CEO – quite significant for Magneti Marelli as our partner in this JV is the world’s largest manufacturer of two-wheelers. The aim is to partner with Hero MotoCorp in order to equip with advanced Powertrain solutions all Hero two-wheelers and most of the two wheelers circulating in a country where current sales are already in order of 15 million per year. We are also proud to be able to contribute to initiating a technological revolution in favor of sustainable mobility for two-wheeled vehicles as well, on one of the most important markets in the world. ”

“It has always been my firm belief that the path to technological excellence is through self-sufficiency and independence.- commented Pawan Munjal, Managing Director & Chief Executive Officer, Hero MotoCorp – Therefore, over the past year, we have been forging multiple alliances with globally-renowned design and technology firms, and the newly-formed partnership with Magneti Marelli is yet another strategic move in that direction. This is our first Joint Venture since charting our solo journey and as an immediate opportunity and focus area, the new firm shall be taking up development and manufacturing of next-generation Fueling Systems. This is one of the most important areas in various technologies involved in making of better fuel-efficient, environment friendly modern engines. Fuel technology has undergone a major shift over the past two decades. The advances in electronics and control technology, which have become smarter and real time, have given a very useful tool in the hands of engine designers to precisely optimize fuel supply for control of output performance, emissions, fuel consumption and usage of certain fuel blends. ”

Magneti Marelli designs and produces advanced systems and components for the automotive industry. With its 86 production units, 12 R&D centers and 26 application centers in 19 countries, about 36,900 employees and a turnover of 5.8 billion Euros in 2012, the group supplies all leading car makers in Europe, North and South America and the Far East. Its business areas include: Electronic Systems, Lighting; Powertrain, Suspension Systems and Shock Absorbers, Exhaust Systems, Aftermarket Parts & Services, Plastic Components and Modules, Motorsport. Magneti Marelli is part of Fiat Spa.